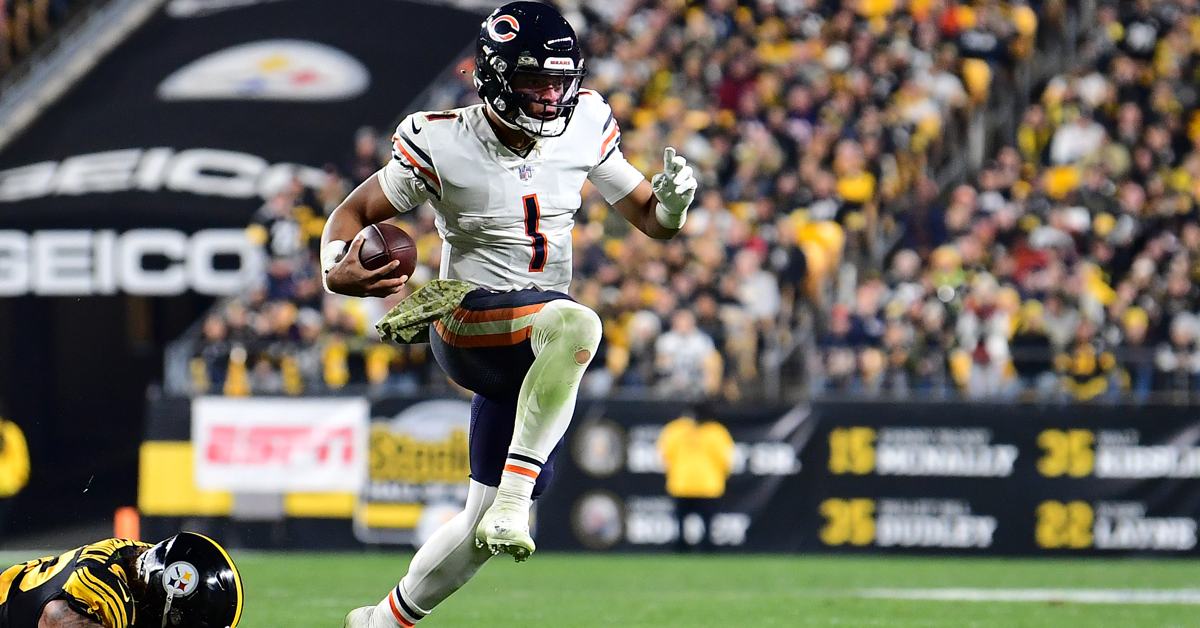 The first of what I hope to be many culinary experiments this summer was grilled mashed potatoes. I thought they turned out fine (especially considering I didn’t have milk to add to the mix), but adding the smoky flavor to one of my favorite side dishes was an intriguing process worth doing again later this summer, particularly if I can hit the right tweaks.

Or maybe I’ll try a grilled pasta (recipe via my friend Jim). Summer is just beginning…

•   Who needs coffee when this Doug Farrar tweet woke me up like I was being splashed with a bucket of water:

Justin Fields had the NFL’s highest passer rating with 138.5 on designed rollouts, and the Bears called them on just 19 of Fields’ attempts.

•   Nineteen. That’s it. Nine. Teen. Sheesh. Admittedly, that is a small sample and I don’t want to pull too much from it. But 19 — for crying out loud, you should be stumbling into 19 based solely on Fields’ athleticism. And then you should stumble across another 19 more after that based on the results of the first 19 tries. Throw another 19 for good measure to see if the second 19 were as good as the first 19 and then go from there. Matt Nagy isn’t the brilliant tactician he made himself out to be.

UNRELATED (OK, semi-related): Now my brain is drifting while thinking about what would be on a “Please Put Justin Fields on the Move for the Love of Sweetness!” playlist. “Rollout” (h/t Ross) is an obvious choice. “Move B—” is another Ludacris song that comes to mind, but perhaps that is a song for a different occasion. Maybe Curtis Mayfield’s “Pusherman” can find its way in the mix, too. We’ve got options!

•   Take that for data (per Pro Football Reference):

•   It didn’t matter if it was Bill Lazor or Matt Nagy calling plays. This whole scheme did nothing to accent what their quarterback did well. They barely made attempts to utilize Fields’ skills. And they were clearly ignoring numbers screaming to high heavens to get Fields on the move. It is truly unbelievable to think of the malpractice that has been done in terms of quarterback development under the Ryan Pace/John Fox/Matt Nagy regimes, as the whole idea of working to a quarterback’s strengths was completely ignored for the better part of Pace’s overarching tenure.

•   There is no way that I’m the only one who felt ick thinking about how — no matter the head coach or offensive play-caller — the coaches GM Ryan Pace brought in did not operate offenses that were playing to their players’ strengths. No wonder Ryan Poles did well in this poll:

New GM brings in a fresh face at head coach. Fresh-faced head coach hires a new offensive coordinator. New offensive coordinator should look at last year’s tape, burn it, and do the complete opposite of what was done for Fields as a rookie. Fixing the Bears offense won’t be as simple as that, but it sure as heck should make for a better place to operate from as we move along.

•   In that vein, a message worth sharing (and repeating) via the latest from Jason Lieser (Sun-Times): “Waiting is brutal, but early steps of Bears’ rebuild are on right track.”

Sure, there are times when it feels like the Bears are entering Year 36 of a rebuild. But the mere departure from the previous regime is enough to make me feel better than what I did at this time last year where hope was propped up by Fields-fueled optimism. Clean slates all around. I’m here for it.

Is Fields a sure thing to be a franchise quarterback? Of course not. But he brings two things to the position this franchise has lacked for an awfully long time: athleticism and charisma. Fields is fun to watch play football and that has not been the case for most of the quarterbacks in the history of the Chicago Bears.

And now he’s the starter. He’ll get an entire summer to be “the guy”. And that’s not a small thing. Fields was neutered in 2021 by a GM and coach that had no interest in playing him; a pair that believed Andy Dalton could win enough games to solidify their standing in the organization. This is not an excuse for his struggles on the field. Those come with being a rookie. But Fields will now exist with the freedom of knowing this is his team. And it should allow his personality to flourish on the field.

•   I don’t think this regime will be reckless with Fields. That is to say that I don’t believe this is a sink-or-swim mission. But this feels like they’re definitely giving him runway to take off. Let’s see what he does with it.

•   How have the folks at AEW not put together an ultimate tag team match?

Who would win, though? 😅#CapitalOnesTheMatch is Wednesday

•   It is never too early to have eyes on which prospects draftniks are connecting to the Bulls ahead of the NBA Draft. Remember, there was some serious buzz around Kyler Gordon right before the draft.

•   Another interesting candidate for the Blackhawks coaching search:

How About Derek Lalonde as a Blackhawks Head Coach Candidate?https://t.co/Ul5khlRTIv pic.twitter.com/uSrQR7dG4q

•   Willson Contreras smoking this one 420 feet was the lone bright spot in the Cubs’ night-game loss in what was a doubleheader sweep:

Willson Contreras Hits One 420 Feet Out Onto Waveland – https://t.co/enUJdcefob pic.twitter.com/mxJEkKdokp

Why You Really Shouldn’t Flip Your Bat Unless You Are Very SUREhttps://t.co/6MpTGKM4Hw pic.twitter.com/1dmX4nntwb