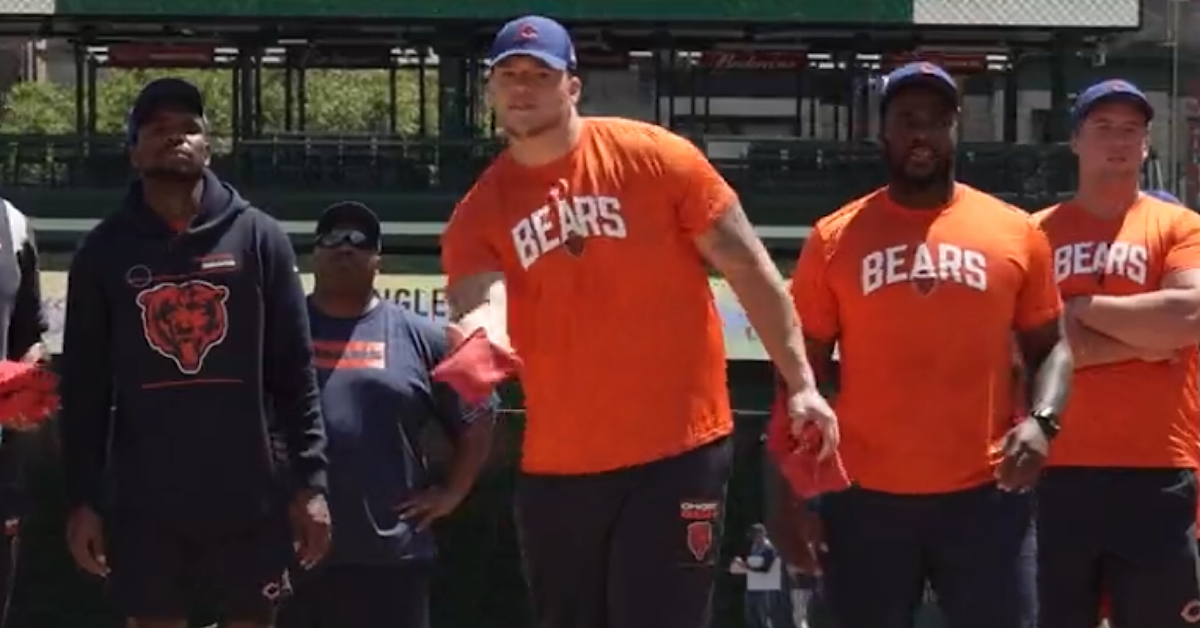 I’m hopping the Red Line to see White Sox-Rangers today, marking one of the handful of times I’ll be at Sox Park this summer. Is there anything I need to try? New food? Drink? Are there any messages you’d like for me to send Tony La Russa while I’m there?

•   Not gonna lie, I was having flashbacks to last fall:

Is that a "Fire Tony" chant from White Sox fans? Or is the "Fire Nagy" chant back?

•   Take it from us: It’s only a matter of time before those chants echo in other realms of Chicago existence. The Bulls and Blackhawks are out of action, so that takes United Center out of the mix. But what is stopping “Fire Tony” chants to break out at 16-inch softball games and neighborhood fests around the city?

•   Don’t get me wrong. Matt Eberflus has a rough road ahead of him as Bears head coach. Eberflus is taking over a team that is flipping its roster, and as a result, has low expectations from folks outside the walls of Halas Hall. With that in mind, Eberflus will get an extended honeymoon period of sorts. Some of that is baked in due to being a new coach replacing one whose popularity sunk like a boulder the last two years.

•   HOWEVA, some of it has to do with the understanding that the roster overturn will make it difficult to judge this coach and his new staff too harshly at the outset. How long the honeymoon period lasts is up to Eberflus. If it looks like the ball is rolling in the right direction, Eberflus will continue to get runway. But if things continue to look like a mucky mess (or the team even takes a step back from where it was at the end of Nagy’s regime), it won’t look pretty. As far as I’m concerned, I’m willing to give a clean slate at the outset and go from there.

•   In fairness, we should give Ryan Poles that much, too. Unfortunately, Poles has had to be the front man for what some would consider unpopular offseason moves (trading Khalil Mack, not re-signing Akiem Hicks) and non-moves (such as the lack of high-profile additions at WR & OL), which makes it difficult for some to give him that type of leeway. I understand it, even if I don’t totally agree with it. But, hey, someone’s gotta play the “bad cop” … right? Can’t be too harsh on Eberflus if Poles isn’t giving him the right pieces. And we can’t be too hard on Poles if we know he is stepping into an unenviable situation taking over the mess Ryan Pace left behind. ¯\_(ツ)_/¯

•   Something to listen to on what I hope is a relaxing Sunday for you and yours:

PODCAST: Has Justin Fields impressed? Will Teven Jenkins land a starting job? @sean_hammond, @KyleNabors and I discuss the latest news and notes from Halas Hall.

Lions propaganda of the day: Amon-Ra St. Brown was the only NFL player to finish last year with more than 70 catches and a 0.0% (!) drop rate.

•   The Bears face both of these QBs this season:

Will Hurts have a similar breakout in his 3rd season?#Eagles #NFL pic.twitter.com/y9C7dkssOJ

•   The Bears’ list of QB opponents is full of dudes who have something to prove in 2022. Kirk Cousins (twice), Daniel Jones, Zach Wilson, Mac Jones, Tua, Goff, Wentz, Mariota … I could go on. It isn’t the Murderers Row we saw last year with Brady, Rodgers (twice), Russell Wilson, Stafford, Burrow, and others. I wonder how we’ll look back at this list of opposing QBs after these games go in the books. In any case, Eberflus and new DC Alan Williams have their work cut out.

•   This feels bold, but maybe Patrick Peterson found the fountain of youth after intercepting Andy Dalton at the end the 2021 season:

•   A potentially interesting offseason target for a Bulls team that needs some help to reach another level:

Bulls Could be the Knicks “Main Competitors” for Big Man Mitchell Robinsonhttps://t.co/AVNSfWvguM pic.twitter.com/nynz6c4Aef

•   OK, but what if I don’t want to prepare for Alex DeBrincat’s departure?

•   Some of the catches I’ve seen during the College World Series postseason have been absolutely bonkers. This one takes the cake:

Texas Outfielder Literally Flips Over the Wall for the Catchhttps://t.co/EPsEsj59CE pic.twitter.com/adCsW6obad