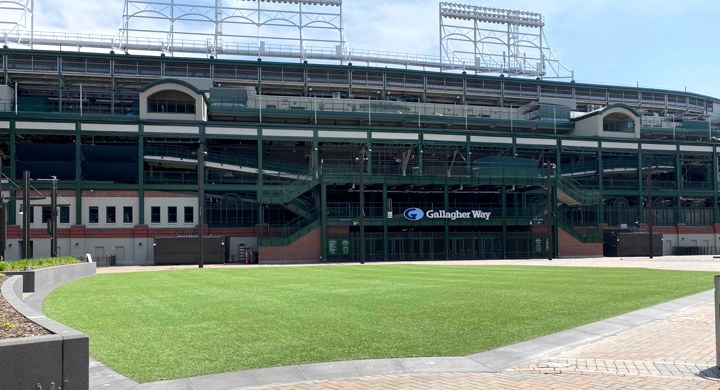 The Chicago Blackhawks have done almost nothing right lately – on or off the ice – but one thing I have appreciated is the uncharacteristic transparency in their search for a new General Manager. Don’t get me wrong, it’s the bare minimum expected of a professional sports team in this day and age, but at least they’re doing that much. So far, the Blackhawks have been announcing some of their candidates via social media, and that list already includes interim GM Kyle Davidson, Carolina Assistant GM Eric Tulsky, former Montreal Assistant GM Scott Mellanby, and St. Louis VP of Hockey Operations Peter Chiarelli.

The team is still hoping to get a decision finalized before the NHL Trade Deadline on March 21, and Davidson appears to be the front-runner for now. But evidently, we’re in for some twists and turns before then. For example, didn’t we hear something about “interviewing candidates both inside and outside of hockey,” from Danny Wirtz when the search was first announced a few weeks back? Why, yes. Yes, we did. And, reportedly, yes they are.

Take a listen to what Jeff Marek had to say on Monday’s edition of Morning Skate (around the 7:30 am CT mark if you’re looking for it yourself):

There’s another name … Elliotte [Friedman] found out that the name Jeff Greenberg is a name of interest for the Chicago Blackhawks.

Jeff Greenberg is an Assistant General Manager with the Chicago Cubs of Major League Baseball. He is the son of Chuck Greenberg – Chuck is a long-time friend of Mario Lemieux, has had a flirtation with trying to buy a couple of NHL teams, most notably the Carolina Hurricanes before Tom Dundon bought the team and the Dallas Stars before Tom Gaglardi ended up buying the team.

So Jeff Greenberg sounds like he’s on the radar, on the map. A lot of people are being really quiet about this, both on the Blackhawks and the MLB/Chicago Cubs level. So I would suspect there is something to it. We’ll see. If they’re announcing candidates that they’ve interviewed that could be one of the names that pops up.

Elliotte Friedman does, in fact, mention Greenberg as someone who is “part of [the Blackhawks] list” for a new GM, along with everyone else listed above, on his 32 Thoughts podcast with Marek (18:30 mark).

Well, wow. It’s not entirely uncommon for teams to flirt with the idea of maybe, kinda, thinking about one-time possibly beginning to consider hiring someone from another sport, but rarely does it reach even this stage of the conversation. And for what it’s worth, Greenberg is a legitimate MLB executive, one of only three Assistant GMs with the Cubs, whose been climbing the ladder for years. He started out with the Pirates, but made brief stops with the Diamondbacks and league office before landing in Chicago. As for his time here, Greenberg joined the Cubs organization all the way back in 2012 as an assistant to the GM. He was then promoted to director of baseball operations (2018) and director of pro scouting (2019), before landing in his current, and most significant, role as Assistant GM (2021).

Point there being, despite what I suspect to be a lack of name recognition from hockey-only or non-Cubs fans, I can tell you first-hand, that this guy is the real deal. At least, in the world of baseball. He would be a real loss for the Cubs and, potentially, an intriguing hire for the Blackhawks. But that’s where the next part of our conversation begins. How did he get on a short-list in the first place?

Here are just some of the connections to consider:

•   Jeff’s dad, Chuck Greenberg, is a hockey guy who’s tried to buy two teams in the past (h/t Jeff Marek for that one)

•   Cubs President of Baseball Operations Jed Hoyer reportedly consulted with the Blackhawks on this search for a new GM.

•   The Hawks President of Business Ops, Jamie Faulkner, is married to the Cubs VP of Sales and Marketing, Colin Faulkner.

And, at a superficial level, there’s likely much more than that.

But what may be even more meaningful is the presence of sports consultant Mike Forde, whom the Blackhawks hired to help with their search back in December. Here’s Jeff Marek again on Morning Skate: “When you look at it, Scott, it’s a Mike-Forde-type list….One of the things he likes to talk about is looking at people in different sports to compliment what you’re doing in your sport. And so Greenberg does make some sense with the Cubs organization.”

Well, okay then. The Blackhawks hired a guy who likes to hire sports executives across landscapes, they said they’d consider a non-hockey executive for the role, Greenberg is a Chicago executive with multiple personal and professional ties to the Blackhawks and hockey, and Greenberg is an up-and-coming organizational leader for the Cubs. In other words, this twist may have been hiding in plain sight.

But beyond that, unfortunately, it’s pretty difficult to tell you how to feel about a candidate like this. I can tell you with some confidence that I believe in Greenberg as a baseball executive, but I have no insight into his hockey chops. And ultimately, I wouldn’t be surprised if this was little more than a token display of thinking outside the box for the Blackhawks, who need to seem progressive right now more than ever. And while there’s an argument to be made about that type of thinking being useful, that doesn’t necessarily mean Greenberg, in particular, is the right guy for the job.

As of now, the Blackhawks haven’t identified Greenberg as a candidate for the gig, but perhaps it’s only a matter of time.

UPDATE: Indeed, it was only a matter of time. The Blackhawks have made the announcement, themselves on Twitter.

Today, we interviewed Jeff Greenberg for our GM position.

Here’s the statement from the team:

The Blackhawks have completed an interview with Jeff Greenberg for the General Manager position, the team announced on Monday.

Greenberg currently serves as the Assistant General Manager for the Chicago Cubs.

Before working with the Cubs, Greenberg interned for the Pittsburgh Pirates, Arizona Diamondbacks and Major League Baseball’s Labor Relations Department. He is a graduate of Columbia Law School and the University of Pennsylvania.