Chris Peters: The Blackhawks Could Find Good Value in the Second Round Skip to content 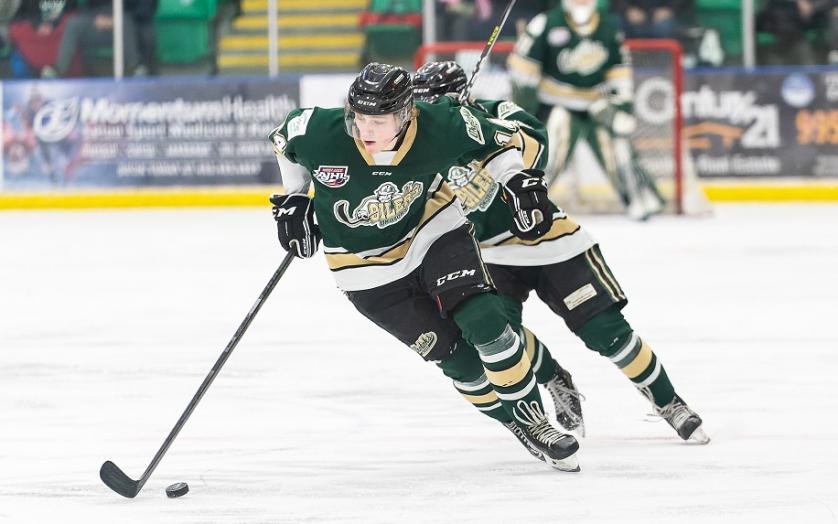 This is a terribly quiet time of year for teams that aren’t still playing in the playoffs, and in the case of the Blackhawks we’re looking forward — far forward. The NHL Draft is in early July and Chicago doesn’t own a pick until the second round (for now).

When the Draft Lottery took place, we discussed whether or not the Hawks wanted to win a top-two pick this year or keep their first rounder for 2023, a draft that is already being hyped. We now know Chicago didn’t win the lottery and their first-round pick (No. 6 overall) has been transferred to Columbus to complete the Seth Jones trade.

So Chicago is on the clock early on the second day of the 2022 NHL Draft, with pick No. 38 being their first selection (again, for now).

I reached out to one of the brightest minds in the talent evaluation game, Chris Peters, for his thoughts on a few players Chicago might be able to consider when they’re finally ready to call a name.

If you aren’t familiar with Peters work, you should be. He produces the Hockey Sense newsletter on Substack and has a finger on the pulse of the college and development programs better than anyone out there. You can also follow him on Twitter at @chrismpeters.

First, what does Peters think about Chicago waiting until 38 overall to make their first pick? It isn’t necessarily a bad thing.

“The first thing I think you have to know about the early second round this year is that there’s a pretty wide range of players that are in the tier that you’d expect to be available. The range is so big that it’s next to impossible to understand who will be available at 38. It’s a good spot to be in because I think there’s enough value in the 20-40 range where you might grab a player that ends up turning into a first-round caliber talent down the line. That’s relative to the class, though, as I don’t think this group is all that strong. It’s not a bad year to not have a first, is what I’m trying to say.”

I asked Peters if there were four or five names that might be good value for the Blackhawks when they’re on the clock, and he was kind enough to share a few for Hawks fans to keep an eye on in the coming weeks. Here’s what Peters had to say about a few intriguing names. (Note: we’re providing the ranking for each player from NHL Central Scouting’s final prospects ratings.)

Peters’ Analysis: “I’ve got time for him. His skating is not amazing, which is why I think he slips, but he led the BCHL in scoring and is going to Denver, where they’ve developed a lot of players quite well. He should be available in this range and it’s never a bad thing to bet on some skill if it’s available to you. He’s probably the most likely of the guys I listed to be available at 38. He’s a proven scorer.”

Peters’ Analysis: “The way he’s trending, there’s a good chance he won’t still be on the board at 38, but he might be. He’s a big winger who is scoring at a high clip in the WHL playoffs and has had a huge hand in Seattle reaching the conference finals. Good skater for his size, late bloomer a bit. Really came into his own this year, has some power to him and really solid scoring ability. I think he’s a good fit because he might not be that far away. His development has jumped big time in the last year and he’s a big-time late riser in this draft season.”

Peters’ Analysis: “A playmaking center, Östlund was a big part of Sweden’s win at the World U18s. He played a ton, has enough defensively to get by. I think the big concern is that his skating is only OK for a player of his size and he needs to get stronger. But, I think there are teams that would pick him in the first if he was in the right spot. But he’s polarizing enough where he might slip and I like the idea of a center there. Centers are hard to find and I think Östlund has a real chance to be a good one down the line. He just needs more time to round out his game.”

Peters’ Analysis: “Another guy who might be available is Rinzel. He is a big, raw defenseman who doesn’t defend all that well yet, but he’s got a ton of tools. Right shot, 6-foot-4, really good skater. Hockey sense needs to come along more, but I think a full year in junior before going to Minnesota should help him develop at the right pace. I think some teams are eyeing him as a late first, but if he slips, there’s so much upside there. He’s a fit because you can never have enough right-shot defensemen in your system and he’s got size they need, too. Plus, there could be a real diamond in the rough here.”

Peters’ Analysis: “I have him in the first, but I don’t know if that’s widely held. He’s a really good skater and true two-way defenseman who is better defensively than he is offensively at the moment but has some real skill bubbling under the surface. I like the player a lot. Good character, good mobility and two-way capabilities. Steady defensemen who don’t get you super excited about any one thing. Might not be a sexy pick, but this is a guy you can win with.”