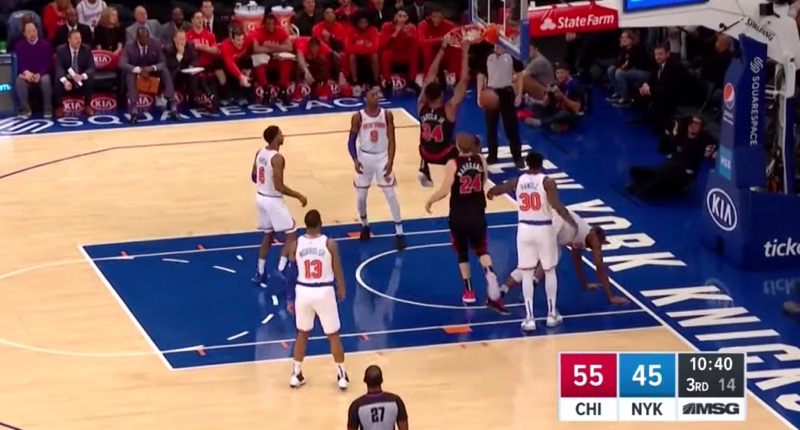 Sift through all those frustrating new memories of Lauri Markkanen missing another three, Luke Kornet getting owned by Bobby Portis, and Zach LaVine not passing the ball, because somewhere in there … deep down … is a Wendell Carter Jr. dunk. Find it? Good, let’s focus on that.

The only real positive takeaway from the Bulls loss to the Knicks on Monday night came via Chicago’s No. 7-overall draft pick (no, not that one … or that one).

Carter Jr. had one of the best performances of his young career against a Knicks squad loaded with big men. Indeed, he stood out among Mitchell Robinson (No. 99) and Julius Randle (No. 71), two NBA bigs who were apparently good enough to land on Bleacher Report’s list of Top-100 Players in the NBA, a list Carter Jr. didn’t make.

And, quickly, that isn’t to say either of those players don’t deserve a spot (quite frankly, I like both quite a bit), but Carter Jr. is a man on a mission after appearing in only 44 games last season, and it started last night.

Trying to prove yourself as one of the best up-and-coming NBA players becomes a bit easier when you drop 20 points, 10 rebounds, and three blocks at Madison Square Garden. This was the first game of Carter Jr.’s career with 20 points and double-digit rebounds.

Carter Jr.’s physicality was a breath of fresh air. He had some ridiculous rebounds over Robinson and Randle, and also expressed some solid awareness on the offensive end of the court. He posted up defenders efficiently, took a smart mid-range jumper, and caught Robinson sleeping for an easy bucket in transition.

And when he wasn’t scoring, he managed to help the team stay in the game. Carter Jr. assisted on Zach LaVine’s go-ahead three around the 4:00 mark, and he also ripped the ball away from Randle on the Bulls’ next possession to help set up Lauri Markkanen’s three-ball.

Like all player’s on the Bulls, his consistency is going to be the biggest thing to watch going forward. With all the talk about LaVine and Markkanen, it’s easy to forget how big of an impact Carter Jr. looked like he could have on the Bulls last season. With the team battling some experienced big man in the coming days (Tristian Thompson/Kevin Love, Andre Drummond, and Myles Turner), Monday’s performance could act as a momentum-builder for the 20-year-old. Plus, if the shots aren’t falling behind the arc, maybe head coach Jim Boylen realized he can rely on Carter Jr. a bit more than anticipated.

I’m sure the Bulls are hoping he can keep this up.