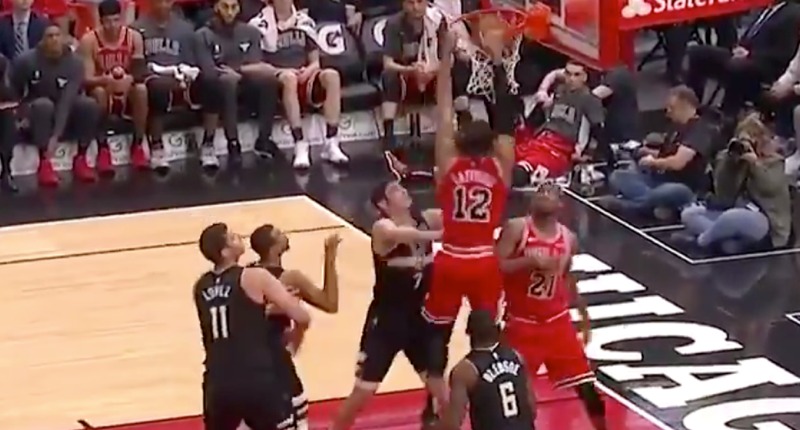 Once a prisoner of the Jim Boylen regime, Daniel Gafford finally escaped.

“I’m out,” Gafford told The Athletic’s Darnell Mayberry. “I’m out there and I’m doing my thing. I broke out.”

The Bulls 2019 second-round draft pick got his first real taste of NBA minutes last night against the Milwaukee Bucks, and to say he took advantage of the opportunity might be an understatement.

Gafford dropped 21 points (10-12 from the field), while pulling down five rebounds and recording two blocks.

Feast your eyes on the madness:

I’m not sure if it has to do with his previous performances with the Windy City Bulls, but from the moment Gafford stepped on the court, he was on fire. The rookie dropped eight points in his first 10 minutes of action, almost instantly making every Bulls’ fan scream: Where the heck has this guy been!?

Head coach Jim Boylen has made his fair share of foolish decisions to start this season, but I’m not sure anything or anyone has made him look sillier than Gafford. The rim running big fit almost effortlessly into the Bulls offensive attack, giving the team an inside presence they’ve greatly lacked all season.

Indeed, the problem hasn’t been getting to the rim, it’s been finishing at anything close to an efficient rate.

For the narrative that the Bulls only take threes:
The Bulls are 2nd in the NBA in FGA at the rim (5-ft or less). They are dead last in FG% at that distance.

Gafford, as many of us imagined, looks like he can help solve this problem.

Rarely does a rookie step on the court and look as seasoned as Gafford did last night (against a team like the Bucks, no less). Worries of reckless basketball or sloppy fouls gradually subsided as Gafford’s role was well defined.

NBC Sports Chicago’s Rob Schaefer wrote about Gafford’s success with the bench lineup that included Coby White, Kris Dunn, Ryan Arcidiacono, and Thaddeus Young. The chemistry was immediate: “I didn’t really have to say anything, they already knew what my plan was … Just go get anything off the rim,” Gafford said.

And he did exactly that. Gafford totaled six dunks on the night, matching the highest single-game total for any player in the NBA this season. Even more impressive, he did this against a Bucks team that has Irsan Ilyasova, Brook Lopez, and Giannis Antetokounmpo underneath the basket.

Gosh, I love this man.

You can check out his full interview here:

“The main thing was to be available, to be ready to get on the floor and do everything I could do to help the team.” 💪

Hear what Daniel Gafford, who scored 21 points against the Bucks, said Inside the Locker Room: pic.twitter.com/JWk1JOCVjs

By the end of the night, it only took one game for Gafford to plead his case to be in the Bulls rotation.