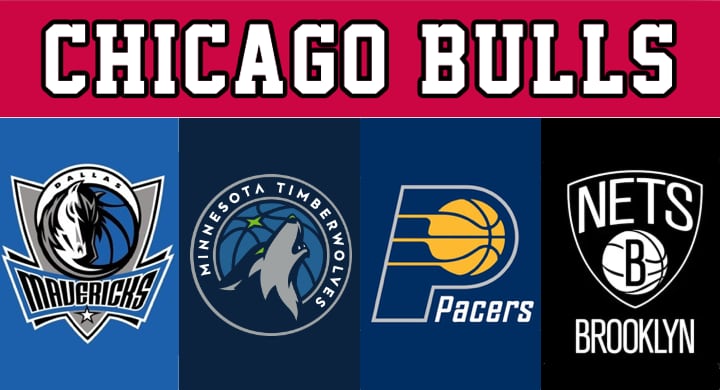 Time to get healthy!

Additional Roster Notes: The Bulls’ expected lineup for this week is a bit complicated. Chances are we’ll see things change quite a bit over the next four games, as several Bulls players try to work their way back from injury. Lauri Markkanen is still considered OUT with a pelvis injury, but on Monday he joined the Windy City Bulls for practice, which could mean he’s inching toward a return. Meanwhile, Otto Porter is set to play for the first time since early November. Woohoo!

Otto Porter Jr. says he will ply tonight against Dallas. His first game since early November.

Bulls: Guess who’s back!? Back again!? Wendell Carter Jr. returned to the lineup against the New York Knicks this weekend. Unfortunately, the big man struggled against the Knicks seven-footer, Mitchell Robinson, and scored only six points with nine rebounds. As one of the Bulls’ most important defenders, Carter Jr. will be a vital piece to this team gaining any momentum heading into next season. Before suffering an ankle injury on January 6th, Carter Jr. was putting together a solid breakout campaign. He was averaging a double-double and was one of the most efficient players on the court. I know it can take some time to get back into a groove, but the sooner he can tap into that early-season magic, the more optimistic we can all be about his status heading into the offseason. The matchups this week should allow for some formidable competition without being over-the-top challenging.

Mavericks: With the status of Luka Doncic and Kristaps Prozingis a bit up in the air for this game, I’m going to go for a wild card. Over the last two games, Seth Curry has basically been his brother. He scored 37 points against the Miami Heat last week before dropping 27 points against the Timberwolves this weekend. A microwave scorer, if Curry gets going, the Bulls are going to have a real problem trying to slow him down. Without Dunn in the lineup, the Bulls perimeter defense has certainly taken a hit, and if anyone can take advantage of this opportunity, it’s Curry.

Timberwolves: To be frank, the Timberwolves stink (but so do the Bulls). Nobody on the team is really riding a hot streak right now, and with Karl-Anthony Towns out, all eyes should turn to D’Angelo Russell. The Bulls were able to hold him to only seven points the first time they played him this season (when he was with Golden State), but that was in large part thanks to a healthy Dunn. Russell always has the green light, and I’m sure he’ll try to feast this time around against the less-than-stellar Bulls.

Pacers: Victor Oladipo’s first game this season was against the Bulls, and while he didn’t have a crazy performance, he made one heck of a clutch shot. The All-Star guard has struggled to get fully back into the groove with his new team, but he’s picked up the pace over his last two games. He scored 15 and 19 points respectively in his last two outings, helping Indiana pick up two victories. With the Pacers running full steam ahead toward the playoffs, I’m sure this team will do all it can to keep Oladipo cooking. A good way to do that? Let him go crazy against the Bulls!

Nets: No Kyrie Irving, no problem for Spencer Dinwiddie. A borderline All-Star candidate when Irving is out of the lineup, Dinwiddie has already helped lead the Nets to two victories over the Bulls this season. Remember how Chicago decided to just give up on him? Yeah, that sucks.