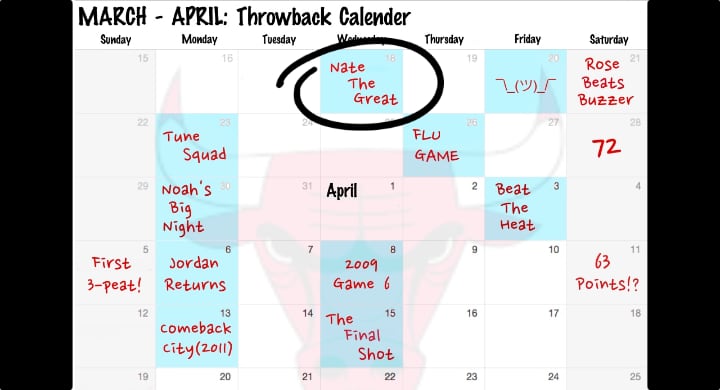 And lurking on the bench to destroy all the Nets’ hopes and dream: Nate Robinson

Look at all these naive punks not knowing that Nate the Great is literally about to destroy them.

Everything about this game was completely absurd. Nate Robinson continued to make crazy bucket after crazy bucket, especially in the 4th quarter when he literally scored 12-straight points under two minutes. Yup, with 2:53 left in the game the Bulls found themselves down 109-95, Nate Robinson then chucked up a three-point shot, and a legendary performance officially started.

Once the clock hit 55.4, the Bulls tied things up at 109 thanks to a Robinson assist on the game-tying basket by Carlos Boozer. Anyway, despite the 4th quarter being one of the most exhilarating moments at the United Center in recent history, the best moment from Robinson came at the end of the first overtime.

With the final second running down the clock, and Robinson dribbling at center court, he took off toward the basket only to leave his feet basically behind the three-point line and knock down a running, one-handed, freakin awkward as heck floater with 1.7 seconds remaining. It. Was. In-cred-i-BULL.

Also, an under-appreciated, super-duper impressive moment from the game: Robinson’s defense on (former Bull) C.J. Watson with 1:11 to go in the 4th quarter that ultimately forced a five-second call against the Nets. And thanks to that turnover, Boozer could score that game-tying basket.

I know I’m on the high of just reliving this madness, but overall, this is seriously one of the most clutch performances I’ve ever seen from a player.

Robinson finished the game with 34 points and averaged 17 points and 3.5 assists per game over the course of the seven-game series. Not to mention, in the Bulls first game of round two against the Miami Heat, Robinson scored 27 points in a Game 1 victory. Wild.

Ultimately, the Bulls didn’t have enough firepower to survive much longer. They lost four-straight games to the Heat, and Robinson’s career in Chicago came to a quick end. However, the five-foot-nine point guard only needed one season to implement himself as a Bulls legend. He played all 82 games of the regular season (a career-high) and averaged 13.1 points with 4.4 assists. The guy shot over 40 percent from the field and behind the arc in one what otherwise should have been a forgettable season for the Bulls with no Derrick Rose.

It’s not normal for a player to build such a connection with a team in only one season, but Nate Robinson isn’t a normal player. Thanks to an electrifying and extremely memorable playoff run (and, most importantly, Game 4), Robinson will always have fans at the United Center.