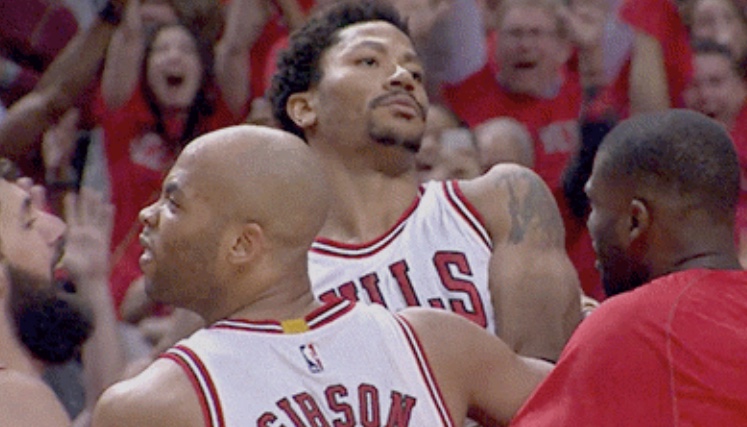 Cleveland Cavaliers at Chicago Bulls – Game 3 of the 2015 Eastern Conference Semifinals (May 8, 2015)

Aaron Brooks was on the bench and had 2pts on 1-6 shooting, which bums me out because I had an unnecessary love for Aaron Brooks.

Something that will always be a weird fact: Iman Shumpert and Timofey Mozgov started for a Finals team.

We weren’t watching prime Derrick Rose. Instead, we were waiting for him to return. The Bulls superstar played only 49 games in the three seasons prior to the 2014-15 campaign. People weren’t quite sure what Rose Chicago would see in the future, but a moment like this gave such a confident feeling of hope. He played only five of the last 25 games of the regular season, averaging only 11.6 points per game in those contests. However, when the playoffs started, he got a pep back in his step.

No, he wasn’t perfect by any means, but he provided flashes of dominance on a heightened stage. During this Game 3 against the Finals-bound Cavaliers, Rose dropped 30 points with 7 assists and 7 rebounds. He looked confident, cool, and like a true competitor. On his home court, in his home town, against the best player in the league – Rose wanted to let the league know he still had the fire-power in him to fight with the big boys.

He talked about it during the postgame, but he did what any big-time player is built to do, he scratched the original play call and simply took matters into his own hands. He raced past Iman Shumpert, received the inbound pass from Dunleavy, created separation, and called the bank as the buzzer sounded.

The United Center went absolutely NUTS. A sea of red waved uncontrollably throughout the arena. Whether it was the truth or not, at that moment, it felt like Derrick Rose was back to take the Chicago Bulls to the promised land.

I think it’s safe to say, Chicago hasn’t had a basketball moment like that since … and probably will not for quite some time. Until this organization makes some serious change, this will be one of the last great moments Bulls fans have to cling to.

That shot was arguably Rose’s last truly great moment in a Chicago Bulls uniform. The Bulls didn’t even win that series, but that moment goes down for many younger Bulls fans as their favorite of all-time. And, in general, I think it plays a large role in Rose’s legacy. Whenever running highlight packages of his career, that shot will always be front and center. After an ACL tear, an entire missed season, and a torn meniscus, Rose still came out to bring his hometown fans to their feet.

While his injuries will always be part of his journey, Chicago fans will remember him for moments like these. Where despite all his trouble and the numerous setbacks, he still did his best to show up time and again. And isn’t that what being a Chicagoan is all about?

Look at that man, he’s a straight-faced assassin!

Marcus Stroman Has Been Cleared to Rejoin the Cubs, Could Start Soon