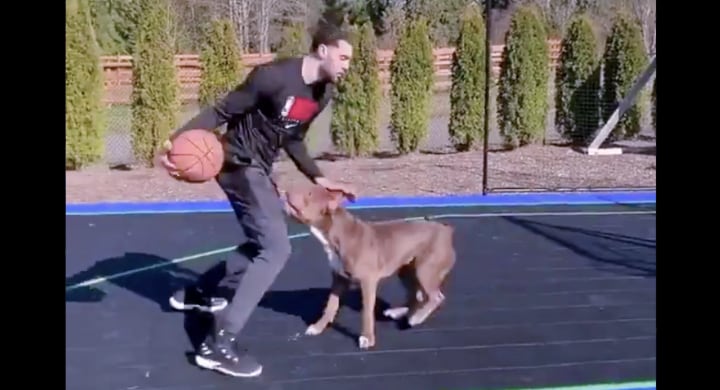 Zach LaVine is delivering the basketball content we all need.

On Friday afternoon, we got a delightful video of LaVine hitting the court with his doggo, Grizzly.

WHAT A GOOD BOY.

I have to admit, while LaVine did kind of expose him with a behind-the-back dribble move and a euro step at the rim for the finish, Grizzly put up a solid defensive effort. I mean recording that steals midway through the game was pretty impressive, and he displayed some quick paw-work, as well. But considering, you know, he doesn’t have hands, it was hard for him to maintain possession.

And I don’t know about you, but I’d be down to watch hour-long live streams of LaVine vs. Grizzly over the next several weeks. To be honest, I might even throw my money at it if this was a pay-per-view event.

Anyway, I was assuming LaVine won the game since he was the only one capable of scoring the basketball, but BOY was I wrong.

Oh snap, just kidding! We have a winner! pic.twitter.com/jSDpFzOFO4

Everyone knows the No. 1 rule from basketball creator James Naismith – thee who destroys the basketball is truly victorious (don’t fact check that).

Also, I feel like this is a good time to tell you that LaVine’s dog Grizzly happens to have his own Instagram (yes, LaVine is that kind of dog owner … who woulda thunk it?). You can go check out all the doggy fun here!

Hopefully, over the next few weeks, we get more of this matchup … I’ll take whatever I can get!