"Get the Ball to Michael, Everybody Get the F*** Out of the Way" and Other Bulls Bullets Skip to content 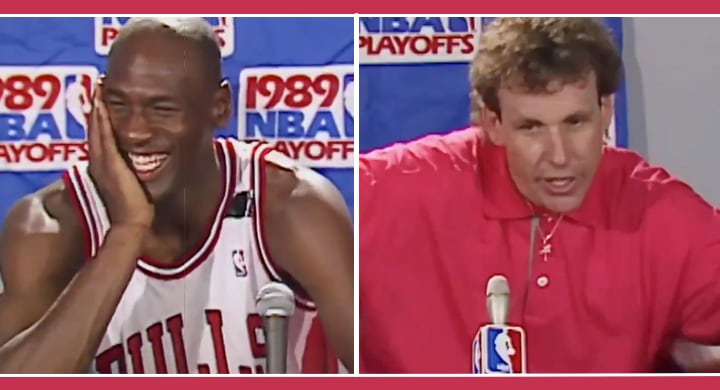 Just saying, when it’s all gloomy outside, it makes this quarantine thing so much worse. Come on, Mother Nature, help a brother out (Michael: Have you been outside yet? It’s like almost 70 degrees!).

Arturas Karnisovas turns 49 today. With his GM in place in Marc Eversley, he’ll continue process of getting to know roster, coaching staff, medical staff, front office holdovers. With no set NBA calendar, time remains on his side before next decisions.

•   Second things second (that’s a phrase, right?) – THE BULLS HAVE A NEW GENERAL MANAGER! Last night, ESPN’s Adrian Wojnarowski announced the Bulls would hire 76ers senior vice president of player personnel Marc Eversley as their next general manager. To learn more about who he is and what his credentials look like, make sure to check out our post from earlier today.

•   To be clear, the official announcement from the Chicago Bulls hasn’t yet been made, but neither has the hiring of JJ Polk or Pat Connelly. With everyone stuck at home and the league on hiatus, there isn’t necessarily a reason to hold a press conference right away. I think it might be a while before we hear from any assistant GM or personnel-related hires, but maybe we’ll at least get another teleconference soon to introduce Eversley … he’s kind of a big deal now. Otherwise, it’s time to keep cruising. Karnisovas has his right-hand-man, and the two can begin to carve out the rest of this front office. For more on where things currently stand, check out K.C. Johnson’s interview this morning on 670 The Score.

•   I’ll be honest, I didn’t belt “LET’S GOOOOO!” from the rooftops when I saw Eversley name. A good chunk of me was hoping for Michael Finley, but the more I focus my efforts on Eversley, the more I get the hire. The track record is there, and he’s supposed to be quite the people person. Karnisovas wanted someone who could connect with players and help reinvent this organization’s reputation. The vibe I’m getting is that while Eversley may not be a guy we know, he’s a guy the players know. And for any of the players out there who aren’t familiar, he’s an easy guy to like. A likable front office face? That’s very new.

•   Last night’s episode of The Last Dance had a boat-load – NAY – a yacht-load of amazing quotes. Let’s re-visit.

•   Michael Jordan hates the Pistons more than you hate anything:

"Get the ball to Michael, everyone get the f*** out of the way" pic.twitter.com/Zo2BAIrjPp

Line of the night pic.twitter.com/at3MdLXoWi

•   Never did I ever expect to hear all those words spoken on ESPN.

•   The Last Dance also spent a ton of time on Dennis Rodman over the last two episodes. While most of it had to do with controlling his larger than life personality, we also got a great look into his basketball mind. He may not make the best life decisions, but when it comes to basketball, the dude knows what he’s talking about. I mean, when Jordan is praising your basketball IQ, you know you’re something special.

Dennis Rodman showing how much he understood and studied timing of rebounding was my favorite part. #TheLastDance pic.twitter.com/RuSoBuAT7J

•   And while we’re on the Rodman topic, you definitely shouldn’t read this LA Times article. Nothing crazy is in it at all, and Carmen Electra definitely doesn’t talk about doing some NSFW thing in Rodman’s place of work. Psssh, terrible article. Don’t read it *wink wink.*

•   At the bottom of the scouting report is says: “Suck it up and take a damn punch. – Michael Jordan”

Wow! #TheLastDance has me digging deep into the archives. I just unearthed the detailed scouting reports that helped us battle the #BadBoys. pic.twitter.com/6ZPCN5ik43

•   NBC Sports Chicago is releasing excerpts from Jerry Krause’s unpublished memoir. The most recent edition includes the late GM’s thoughts on Dennis Rodman: “If you’re me, you’d say that he was a great team player, one of the most intelligent basketball players ever, a 6-foot-8-inch player with the ability to defend anybody from 6-2 guards to 7-2 centers. He was a player who in three years for us never hurt anybody but himself. He was a kind, giving person, a human being who learned what it took to make money and took advantage of it—-which last time I looked was called the American way.”

Jerry Krause had a lot of love for Dennis Rodman.

•   Wait, why did Phil Jackson talk to Jim Boylen?

•   I can’t wait for the Toni Kukoc episode. A whole new generation is going to see just how good this guy was. Not to mention, why he’d fit perfectly in today’s NBA.

Kukoc talked at great length to ESPN on all things "Last Dance," Dream Team, his relationship with Scottie and Michael, more. And, yes, he will be featured in the documentary soon. https://t.co/8uVLbnu6EK