Teaser for the Final Episodes, Investigating Bulls Aliases, Still Crushing on Gafford, and Other Bulls Bullets Skip to content 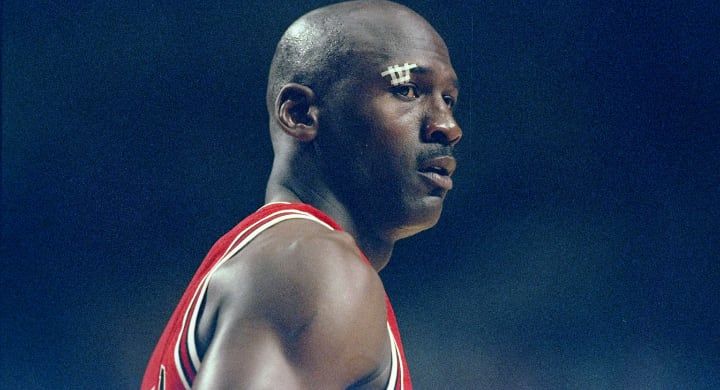 Have you ever done a puzzle that has no image to work off of?

Well, it’s challenging. I need MJ to come in here and scream some profanities in my face so I can get the motivation to finish it.

•   Shoutout to NBC Sports Chicago’s Rob Schaefer for doing some extremely necessary investigative reporting. After former Bull Rusty LaRue (which has always been an A+ name that sounds like it belongs to a person straight out of the Wild West – *begins cliche western accent* Oh, that’s Rusty LaRue of the Golden Spittoon Saloon) tweeted out an image of the team’s old hotel rooming list. The list included a bunch of random names, one’s that were clearly alias for some of the team’s top players. With a good deep dive, Schaefer was able to take an educated guess on what name belonged to what player. For example, Jordan ran with Oscar Miles, Steve Kerr was Austin Powers, and Ron Harper was Peter Parker … give his article a read.

•   Of course, I now have to ask: What would your sports alias be? Would you roll with a character name or make something up completely on your own? I’m tempted to go with the former but not pick something so obvious. Maybe a Jeff Winger from the show Community or perhaps Riley Poole from National Treasure. I mean, come on, those are two pretty freakin’ solid aliases. Also, you know what? Screw it, I don’t have to be famous to use an alias when I check-in at a hotel. In fact, it would be kind of hilarious to tell the front desk person I want my room name changed when I’m clearer not famous. They’d either think someone was out to get me or I’m incredibly full of myself (both might be true).

•   Neil Funk went on the Bulls Talk Podcast to talk about one heck of a broadcasting career. I swear, he better get one last real game with fans in attendance. We need to send Funk out with the standing ovation he deserves. As Stacey King would say, give him the “hot sauce.”

•   Yesterday, the Bulls somehow made a not-so-surprising move very surprising.

Bulls Will Reportedly Not Retain Director of Player Development, but Whose Decision Was It Really?https://t.co/SjIyYo8M8a

•   I guess Jim Boylen is still allowed input? Truthfully, the decision to let Respert go was probably not too complicated, but it does seem a bit tone-deaf for these new hires to allow “Jim Boylen made the decision” to be the message sent out to fans. Ugh. At the end of the day, I expect an entirely new coaching staff in the Advocate Center at the start of the 2020-21 season, so none of this really matters. But I’ve still been a tad frustrated with how this Boylen situation has been handled/reported.

•   ESPN’s Zach Lowe wrote a great piece on the impact Pippen had on his fellow teammates. I know the recent news about his “firing” as a team ambassador added another sour note to his Bulls story, but no matter what happens, there will always been an undeniable appreciation between Pippen and the players/fans of this franchise. Great read.

•   Reason why you should absolutely love Daniel Gafford like I do: “I’m just that guy that’s a rookie, that’s not going to take no BS from nobody. Everybody has seen the examples from when we played the Pistons and me and Andre Drummond had an outing. But you know I’m that guy that’s not going to take anything from nobody and let you just push me around like I’m just a little kid. I’m always going to come back with some type of fire no matter what. Whether I block your shot or I score on you so believe that.” Now can you see why I picked him to be the best teammate for Jordan on this current Bulls roster? Check out more from his interview with Pig Trail Nation here:

•   Wait, why does Luc Longley look like he owns a start-up company in Silicon Valley?