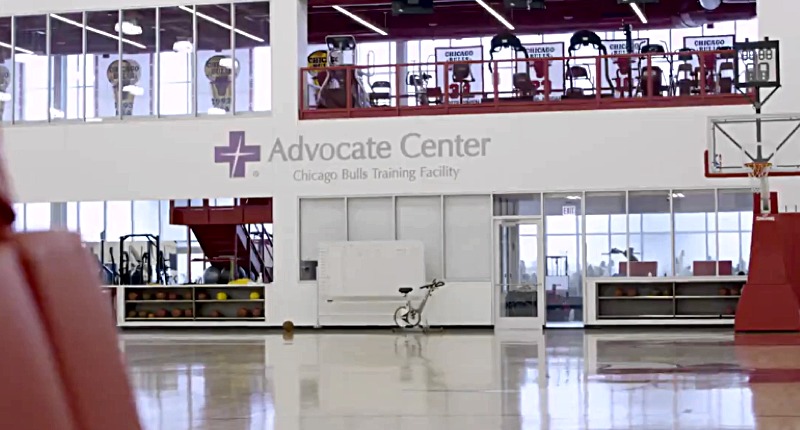 ARE YOU READY FOR SOME SOCIALLY DISTANCED BASKETBALLLLLL!!???

According to NBC Sports Chicago’s K.C. Johnson, Chicago Bulls players are heading back to the Advocate Center.

Lauri Markkanen, who has remained in town, has been going to Advocate Center for awhile. His pelvic situation, which he returned from before league hiatus, places him under NBA-sanctioned guidelines for treatment at team facility.

While Markkanen has been in and out of the facility for rehab purposes on his pelvis, David Kaplan is reporting that two other Bulls players also entered the building this morning:

Just was told that Lauri Markkanen and two other Bulls players just walked into the now reopened Advocate Center. We will discuss this and a whole lot more on @espn1000.

Practices will not begin until June 3rd (the same date the city of Chicago is scheduled to officially begin Phase 3 of the reopening process), and players must still adhere to the NBA’s strict facility guidelines. So for the time being, these guidelines allow only four players to be in the facility at once and prohibit any group activity. Players can work with a single coach/trainer (head coaches are not allowed … which is good news for the Bulls) at a respectable distance and must be spaced 12 feet apart from teammates while in the gym.

The Bulls will be the 24th team in the NBA to open up its facility, which coincidentally is the same as their league standing.

According to the latest in Chicago as reported by @KCJHoop, Friday is the Bulls' target to open their practice facility and leave the NBA with just six locked gyms:

With the team starting to reconvene for the first time since they held a meeting on March 16th, Johnson also reports that new front office leaders Arturas Karnisovas and Marc Eversley will finally make their way to the Chicagoland area. Up until this point, all business has been conducted virtually, so this feels like a pretty big step forward in the Bulls new era.

Speaking of which, both Karnisovas and Eversley have remained adamant about following a strict and traditional evaluation process for most of the organization’s personnel. While some names have been let go (including head trainer Jeff Tanaka and player development coach Shawn Respert), we may begin to see a consistent flow of changes made now. Not to mention, these two will soon be able to speak with head coach Jim Boylen in person, and possibly see firsthand the way he leads this team. Possibly then, finally, we’ll see a decision made on his future. I’m still pretty darn confident he’ll be shown the door, but they were waiting to at least give him the respect of doing it in person. It’s kind of just an unwritten rule, you don’t break-up over the phone.

Anyway, even if the Bulls don’t play another game this season (which is beginning to feel more and more likely), the fact they can return to some kind of normalcy is refreshing. And the more normal things start to feel in the basketball world … hopefully, the more normal our lives will start to feel.