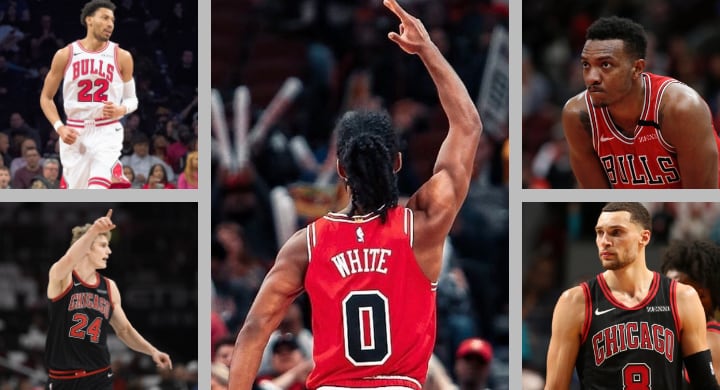 I moved into my new place over two weeks ago, and I told myself once we were here I’d finally order a new desk. Let’s just say, I have yet to do that and my couch is very comfortable (Michael: It’s a death trap, that I still haven’t gotten out of).

•   The pandemic is over, and you’re hanging out in your favorite bar with your favorite pals. Laughs are flying, drinks are tasty, and life is going great … for the most part. Despite all of these good times, an emptiness sits inside of you – one that can only be filled by the beautiful man/woman across the bar. This feels like fate. You have to go talk to this person, but there’s one big problem: You’re kind of a loser. Hey, don’t take it from me. [Insert your friend’s name here] told [insert another one of your friend’s names here] who told me. If you go over there alone, you’re going to make a fool of yourself. But, fortunately, you have a special lifeline that allows you to contact ONE current Chicago Bulls player to be your wingman. Who do you pick?

•   We have to take a lot into consideration. We need someone who is charismatic, but not too charming. We need someone who can steal the show, but then put the spotlight on you. Zach LaVine is too cool. Lauri Markkanen is too quiet. Coby White is too young. Adam Mokoka has too awesome of a name. Thaddeus Young might tell too many dad jokes. Hm. Wendell Carter Jr. could be a good choice, but I just have a feeling he’ll draw too much attention toward himself. I mean, have you seen that smile? Crazy enough, I think I’m going with Ryan Arcidiacono. The guy seems to be pretty easy to talk to, and if his wingman game is anything like his on-court game, he simply knows how to fill his role. Arcidiacono will come in, hit a three, and dish out the clean assist before leaving you with your new life partner. Done and done.

•   The Athletic’s Sam Vecenie put together a new mock draft, and he has the Bulls selecting Florida State’s Devin Vassell with the No. 9 pick in the draft (he ran a random draft lottery simulation to come up with that slot). This is not the first time I’ve seen Vassell thrown into the Bulls conversation. I wouldn’t LOVE the pick, but I wouldn’t hate it. In my opinion, Vassell has the makings of a solid NBA starter and not a whole lot more. As the draft nears and we start breaking down prospects, I’ll be sure to dig a little deeper into him. For now, here are some highlights:

•   Meanwhile, Sam Smith wrote about what each of the top-prospects could mean for the Bulls.

•   According to Steve Kaminski of mlive.com, Jim Boylen will attend a high school basketball camp later today in Grand Rapids, Michigan (his hometown). The head coach will reportedly bring several staff members and players, which has me quite interested. I don’t think it’s crazy to believe that whoever he drags along is still somewhat on his side, and for that reason, this will be something to keep an eye on.

Per league memo to teams obtained by ESPN, the NBA is addressing concerns about players who have recovered from COVID and continue to test positive. Teams have been concerned about false positive tests possibly sidelining healthy players.

•   The Bulls played the 4th-most games in clutch situations last season … and they basically blew all of them. Finishing games is just one of many things this team has to work on this offseason.

The Bulls Were Actually in a Lot of Close Games This Year, They Just Never Learned How to Closehttps://t.co/WuohsLbUEU

•   Zach LaVine practiced social distancing before it was cool!

It's not hard, folks. Learn from Zach LaVine. pic.twitter.com/lKLVXQD8RQ

•   Happy birthday, Luke! Thanks for being a massive human being who can hit 3’s surprisingly well.