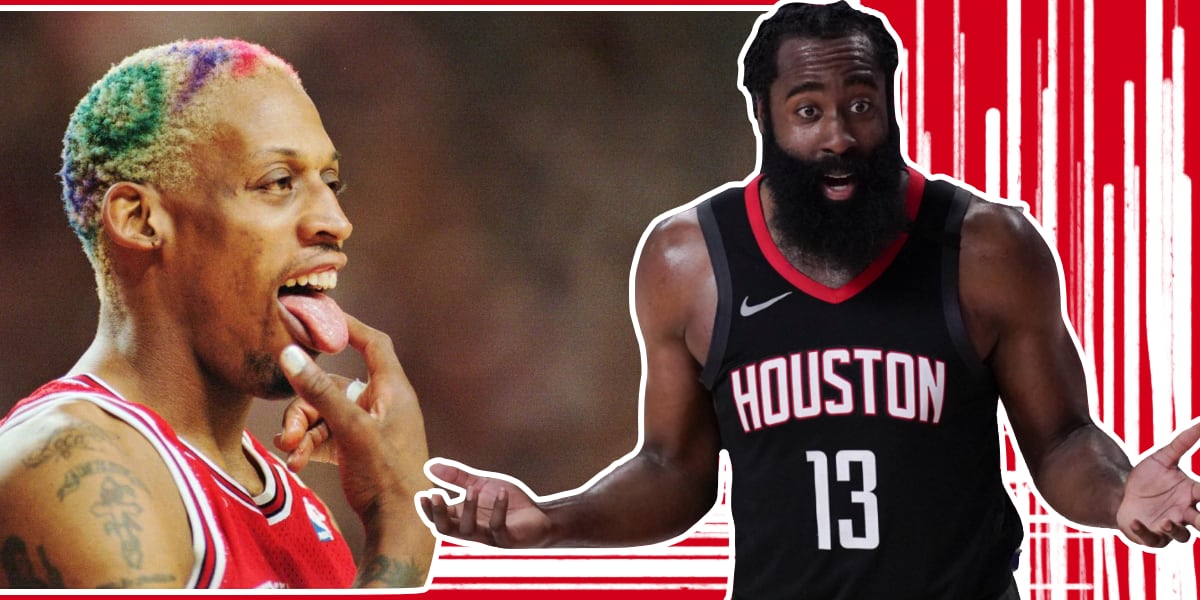 Let’s get one thing straight, there will never be another Dennis Rodman.

On and off the court, the NBA Hall of Famer was truly one of a kind. He finished his career as one of the league’s greatest rebounders and most iconic personalities. And while his true talent shined on the court, it’s just a simple fact that no one in basketball history has ever been able to party quite like The Worm. Whether it be his quick trip to Vegas in the middle of the 1997 NBA Finals or his party bender in the middle of the 1998 season (which was revisited recently in The Last Dance), Rodman managed two lifestyles in a way that no one will ever be able to replicate. Yes, not even you, James Harden.

The Houston Rockets superstar is one of the best offensive players of the past decade. He is a former-MVP and one of the most gifted shot creators we have ever seen. He is also no Dennis Rodman – no matter how hard he might try to be.

ESPN’s Tim MacMahon has been all over the recent Harden drama, which has included a trade demand and a late-training camp arrival. Now, MacMahon published a more comprehensive review of Harden’s relationship with the Rockets organization, and his report certainly makes it sound like Harden is trying to do his best Rodman impression.

If the Rockets had two or three days between games, it was a good bet Harden would call for an off day and charter a private jet to party in Las Vegas or another city. He always gets an excused absence from the first practice after the All-Star break for the same reason.

“If they have multiple days off, everybody knows: James is going to fly somewhere else and party,” a member of last season’s coaching staff said. “But he’s going to come back and have a 50-point triple-double, so they’re OK with it.”

He hasn’t made another teammates come and track him down yet? Weak sauce.

I love a party hooper as much as the next guy, but unless he is trying to mimic Spurs-era Rodman and not Bulls-era Rodman, Harden is doing it all wrong. The Rockets franchise may not be the most stable right now, but they’ve at least tried to give Harden what he has wanted in the past. From trading for Chris Paul to Russell Westbrook, this is an organization that has tried to keep its superstar happy. How has he recently repaid them? Barely talking to their new head coach (who is reportedly one of the nicest guys in the NBA), showing up to training camp late, being seen during a pandemic at a club without a mask, and demanding they trade him.

Again, all things considered, that is pretty Rodmanesk if we compare it to the time in San Antonio. But the partying-and-playing side of things is only fun when you can counter-balance it with some of that wacky Rodman charm. Harden doesn’t have that. At least, not yet.

Another thing Harden doesn’t have: rings. In fact, that’s the main reason Harden’s Rodman impression instantly falls flat. He may be able to take the court shortly after a night in Vegas and drop 50, but can he do it in the NBA Finals? Can he talk the talk and walk the walk his way to a championship? Look, I know Rodman played with some of the best talent to touch a basketball, but Harden is also the more gifted of the two players. What was so special about Rodman was the way he could lose his mind off the court and use his mind on the court. Until Harden can crack more than a single Western Conference Finals, the behind the scenes antics will only feel like something that damages his legacy, not adds to it.

Check out ESPN’s full story on Harden below:

“Whatever James wants” has been the Rockets’ philosophy since James Harden arrived in Houston. That changed when he wanted to leave. Ex-Rocket assistant: “Now they have to live with the fallout.” https://t.co/ymTogDUPic