Beating the Knicks Feels Good, LaVine Needs to Win, Return of the Mid-Range, and Other Bulls Bullets Skip to content 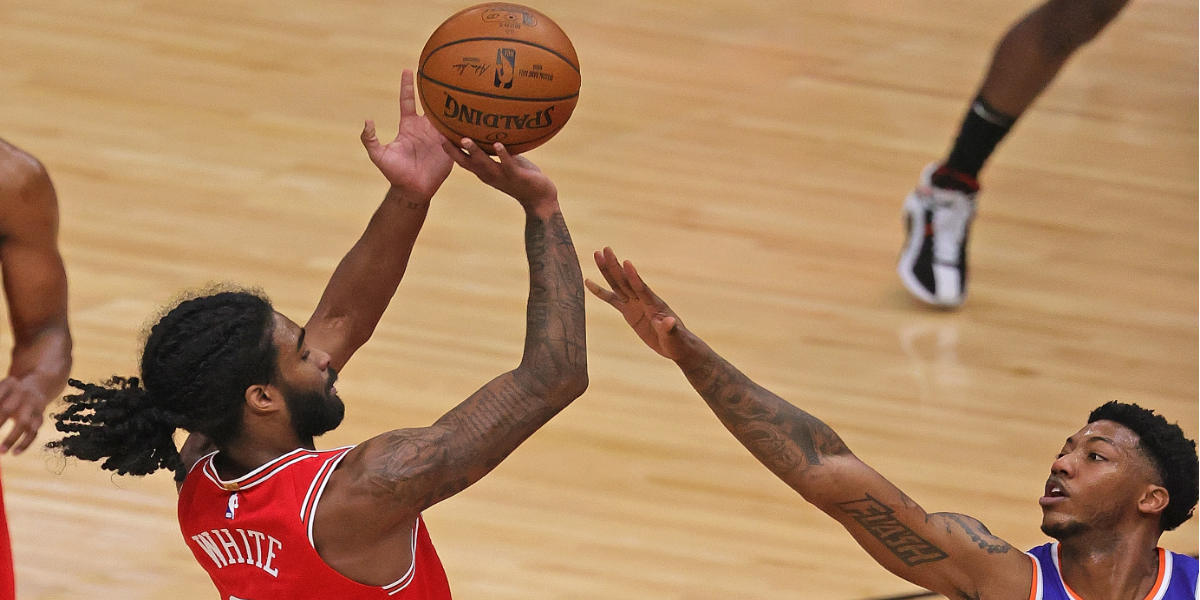 Should I finally buy the pair of Jordans I’ve had open in a tab for the past three weeks? Someone just say yes so I do it (Michael: Hell ya).

•   Beating the Knicks will never not feel lovely, especially when that beating results in a jump ahead of them in the Eastern Conference standings. The Bulls now sit 9th, right behind the Charlotte Hornets. Of course, as we sit only 19 games into the season, all of this is subject to change at basically a moments notice, but the Bulls do have a chance to create some kind of cushion for themselves this week with another matchup against New York on Wednesday before two matchups with the 12th-place Magic this weekend.

Started the month with a W 🙌@ConstellationEG Game Recap: pic.twitter.com/HodbJQ0Cp7

•   As we discussed in our weekly preview, these matchups against some fellow Eastern Conference bottom-feeders could be vital in Zach LaVine’s All-Star push. The Athletic released their picks to crack the All-Star roster this season, and receiving nothing more than an honorable mention was the 25-year-old. Their reasoning? The Bulls record. They lumped LaVine in with Nikola Vucevic and Jerami Grant as someone who will be deemed not worthy of an All-Star selection due to the Bulls’ underwhelming win-loss column. In other words, the same crap that has held LaVine back from receiving the accolade in years past.

•   The Bulls sit at 8-11 right now, and with a stretch of “winnable” (a loose term for this Bulls team) games ahead, there is a chance for LaVine to make it a bit harder for people to make the win percentage case. Chicago is only 1.5 games behind the 6th-place Atlanta Hawks who sit at 10-10. Again, we have a lot of games to be played before All-Star selections are made, but there is a chance for this Bulls team to make up some ground in the win column with easily the hardest stretch of their first-half schedule behind them.

Looks Like We Could Get a 2021 NBA All-Star Game After Allhttps://t.co/kixM7YORcp

•   The mid-range game is back (well … kinda). Head coach Billy Donovan has given his players plenty of offensive freedom this season, and that has come with a hefty increase in mid-range J’s. More specifically, the Bulls have already taken over half as many mid-range shots this season as they did in 2019-20. They have hoisted up 91 attempts compared to just 173 under the head coach that shall not be named. I don’t know about you, but I LOVE to see this. In fact, I remember writing last season about how bonkers I thought it was that the coaching staff appeared to scare these players away from putting that shot up (*does a quick BN search* Ah, yes, here it is). The analytics say what they say, but numbers can’t necessarily take into account a player’s comfort or individual skill. Players like Coby White, Zach LaVine, and Otto Porter have always been solid mid-range shooters, and instructing any player who has that in their bag of trick to shy away from it feels counterproductive. Sure, it might not be a high-percentage shot for some, but it can be for others. I’m glad Donovan recognizes that.

Any extra juice in beating Thibodeau after he traded you?

LaVine: "Me and Thibs are cool, man. Playing against old coaches, I'm just going out there to win. It's not a grudge thing for me. I think my grudge game was the first time we played against them with the Timberwolves."

•   Watch out for the Chicago Sky this year, folks.

You have NO idea what this means to me. I have always been a fan of the bulls and now to be in the same city just means more. THANK YOU https://t.co/5AWt28BoWH