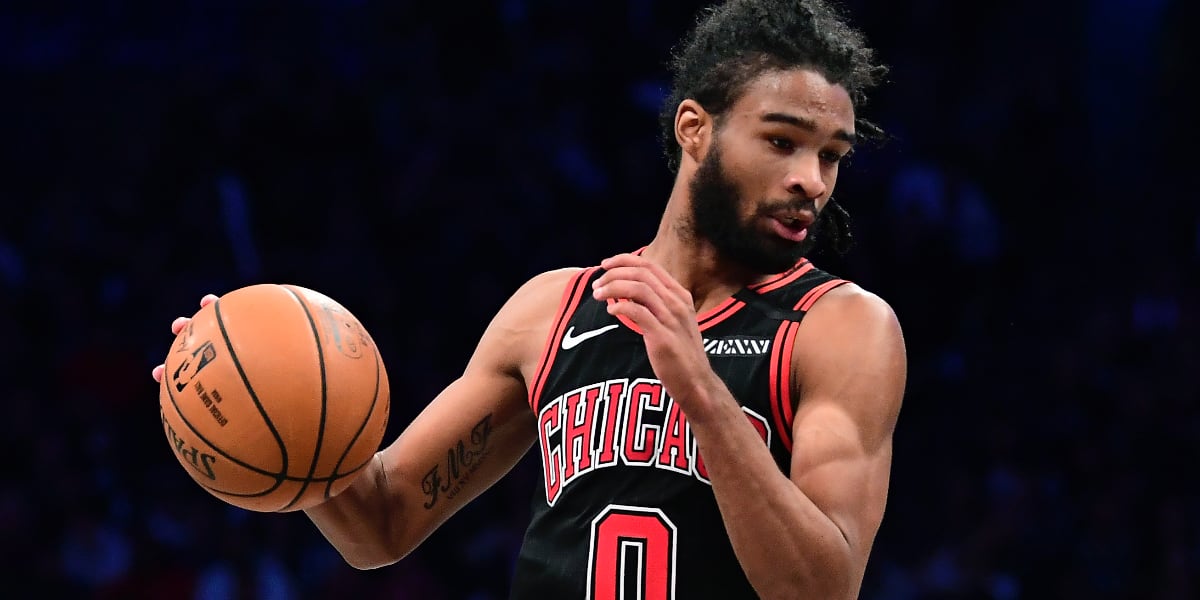 Coby White has averaged 15.5 points, 5.4 assists, and 4.7 rebounds per game so far this season, and (if we’re being honest) he hasn’t looked too good doing so. His field goal percentage continues to teeter on the 40 percent mark, and his assist percentage sits at an underwhelming 22.8 percent, which only ranks in the NBA’s 27th percentile, per Cleaning the Glass. Combine the stats with a simple eye-test, and it’s hard to argue against any of the concerns surrounding White’s future at the position. But that won’t stop me … or Billy Donovan!

The Bulls head coach came to his second-year player’s defense before Wednesday’s game against the Pelicans (emphasis mine).

“He knows there’s things he’s gotta figure out, he’s 20 years old. And I would just say this: Coby starting the game has nothing to do with us winning or losing. Whether he’s coming off the bench or he’s starting, we still need him to continue to develop and get better. And he has been committed to doing that. There are things that he is having to learn, that he’s been very, very open and honest about …

Now, I feel like my job as a coach is to continue to work with him, to show belief in him, and to help him make the steps that he needs to make for improvement.”

Does that sound like a man who has even thought about benching his point guard? Yeah, not at all.

White is the Bulls starter. It’s what fans screamed for last year, and it’s what the front office decided to roll with when they chose not to sign or draft a more traditional point guard this offseason. I get the concerns surrounding White’s early returns, but I also can’t help but think White has just overthought his role thus far, and it seems like Donovan might agree.

“He’s just telling me stay aggressive, stay confident,” Coby White said about his head coach after Wednesday’s game (h/t NBC Sports Chicago). “Like in the Orlando game, he told me he doesn’t care how many shots I miss, take my open ones, drive the ball, create, keep being aggressive. So he’s just instilled me with confidence. We have a lot of talks, watch a lot of film. He’s been great about it. He’s lenient with me, but he’s also really, really tough on me at the same time. That’s nothing more that I can ask for from a coach from my standpoint.”

While the team needs him to improve as a playmaker (as well as in a number of other areas … duh, he’s only 20), they also need him to do what he does best – score. Could he focus on that more in the second unit? Possibly, but there is also a reason the team’s top basketball minds want to see him in the starting lineup, and we saw at least part of that reason in the team’s blowout victory over the Pelicans.

White dominated with 30 points and 7 assists alongside Zach LaVine. The two combined for 76 points and 17 made 3-pointers. When both are on a roll, there is no doubt that the Bulls see the floor open up and their offense at its best (the team has 35 assists for the first time since 2017). And I think it’s very important that White was able to pair his second-highest scoring performance of the season with his 4th-highest assist total of the season. The Bulls got him going early, built his confidence, opened things up, and got overall better production out of the role they want him to play.

I know a traditional ball distributor feels like a necessity, and I’m not necessarily saying that it isn’t, but I do understand why the Bulls are still interested in filling the point guard spot with White. He is another strong bucket-getter who can create a deadly duo alongside LaVine on any given night, and the ability to experiment with that for more than 25 games is hard to pass up.

What the Bulls need to do now, though, is to encourage White to keep hunting shots. Before last night’s game, White was taking his fewest field goal attempts of any quarter in the opening frame this month. He has looked increasingly reluctant to take his shots as he attempts to facilitate. I’m glad he’s trying to play the traditional point guard role, but I think he and the Bulls just need to accept that isn’t who he is.

In my opinion, White can play point guard for the Bulls (for now), but he just has to think less like a point guard and more like Coby White. The more he lets the game come to him, the more he can help his teammates.