For the first time since 2016, the Chicago Bulls have won a basketball game in Indianapolis.

Seven players scored in double figures to help the Bulls snap their 10-game losing streak to the Pacers, and the entire squad absolutely dominated on the glass. The Bulls out-rebounded the Pacers 60-47, including a 13-8 advantage on the offensive glass that led to 25 second-chance points (their most since January of 2017).

The return of Wendell Carter Jr. certainly helped the Bulls pull off this impressive performance, as the third-year big man didn’t look like he missed a beat in his first game since January 22nd. He just missed out on his 4th double-double of the season with 11 points and 9 rebounds in 21 minutes of action.

Of course, the final shoutout of the evening has to go to no other than Zach LaVine. The should-be All-Star dropped 30 points for the 12th time this season, a feat only Bradley Beal, Damian Lillard, and Stephen Curry have accomplished thus far (h/t Jeff Mangurten). He scored 14 of his points in the 4th quarter and overtime, including this insane go-ahead 3-pointer with 28.4 seconds remaining.

We’ll talk more about what made this win happen in bullets tomorrow (*ahem* Bulls got pretty lucky with Pacers missing basically every single layup they took). For now, let’s enjoy the W and watch The Bachelor. Great win! 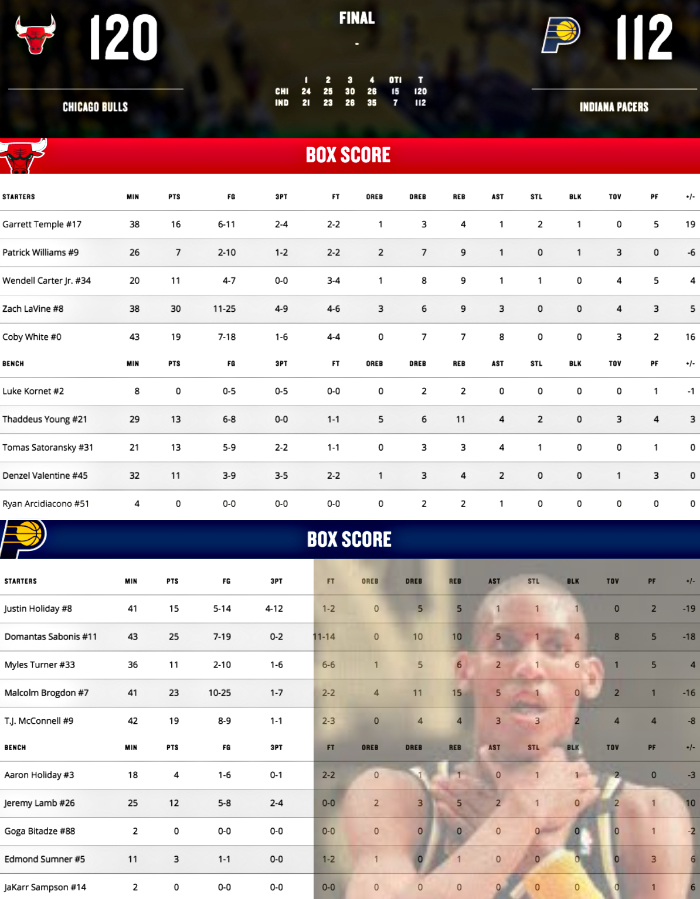