I guess that was better? I don’t know.

The Chicago Bulls managed to hang around with the Miami Heat for a bulk of the game, but they struggled to close the gap against an Eastern Conference playoff team in an all-too-familiar fashion. Despite ramping up the physicality and outrebounding the Heat 49-41, the Bulls still lost the points in the paint battle 46-36 and finished with 16 turnovers in their 101-90 loss.

It was yet another game where Chicago failed to take advantage of a depleted opponent. The Heat were missing their second-best player and top interior-defender, Bam Adebayo, and the Bulls still shot a ghastly 38 percent in the paint (16-36 at the rim). Despite that atrocious shooting clip, though, the Bulls had a legitimate shot to steal the game in the 4th quarter, but Goran Dragic had different plans. The 34-year-old scored 20 of his 25 points off the bench in the 4th quarter in what could have been his long-awaited revenge on the Bulls for Derrick Rose turning him into a poster.

Anyway, I’m just not sure what to think of this team right now, especially with the schedule staying at this level of difficulty for the foreseeable future. This just isn’t the same Bulls squad we saw before the All-Star break, and with so little practice time to finetune the errors, I’m not sure when we will see that team again. Kinda worried. 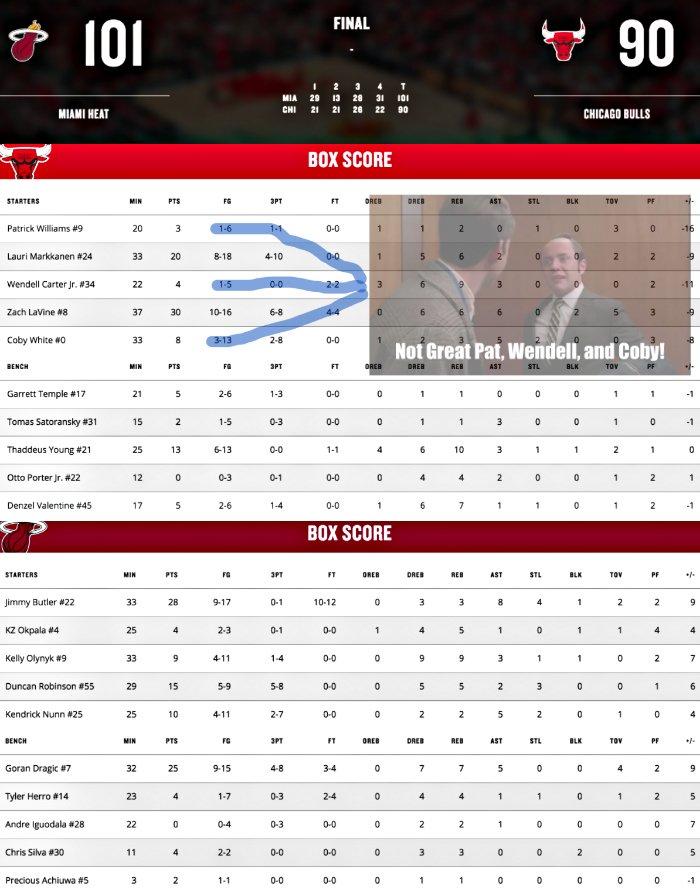