Pro tip: Go into every game thinking the Bulls will lose, and your night will be automatically better!

From here on out, we have no reason to think this team will be able to accomplish anything significant. Zach LaVine is out for an indefinite period of time, and the squad was already on a dysfunctional four-game losing streak (now five … woohoo!) Also, the Raptors and Wizards both won their games to tie the Bulls for the 10th seed, which means this loss could very well mark the end of Chicago’s play-in dreams.

So, instead, all we should do over the next couple of weeks is try to walk away with some things to build on. If the Bulls somehow stumble their way into some wins … great! If not, then we can look at things like Coby White’s bounce-back performance tonight as a positive. The Bulls guard finished with 27 points on an efficient 8-17 shooting performance. He also dished out 7 assists, grabbed five rebounds, and got to the line for seven free-throw attempts. Oh, and best of all, he had only one turnover! While the Bulls may have walked away with the L, it was a performance that reminded all of us of his intriguing upside. His fit in Chicago alongside LaVine might be a tad odd, but there is no question he is a bucket-getting talent that is worth not giving up on at only 21-years-old.

Another silver lining, the Bulls actually came out looking like they had something to play for. Everything may have slipped away in the 3rd quarter (it was when we all sat there thinking, “yup, it’d be real nice to have LaVine right now), but at least they seemed to have an edge to them that has been lacking since their win over the Pacers. The question now is whether or not they can keep that edge in a battle with the Cleveland Cavaliers tomorrow night. 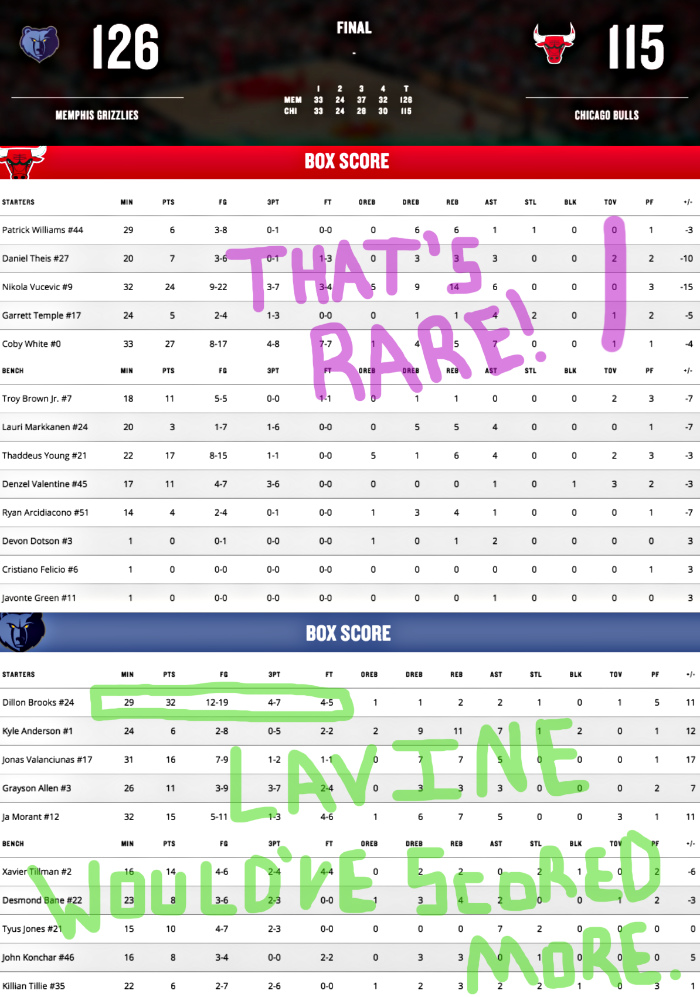