Losing to the Knicks hurts.

Losing to the Knicks who have Tom Thibodeau as head coach and Derrick Rose and Taj Gibson on the roster hurts more.

Losing to the Knicks who have Tom Thibodeau as head coach and Derrick Rose and Taj Gibson on the roster in the midst of a final 11 game fight for the play-in tournament with no Zach LaVine … hurts the most.

I’ll give credit where credit is due. After an unsurprisingly rocky first quarter, the Bulls were able to battle back and match the physicality of the Knicks’ 4th-ranked defense. By the roughy the 7:20 mark in the 3rd quarter, the Bulls had their first lead of the night thanks to a Tomas Satoransky layup on the Nikola Vucevic assist. The game quickly turned into a back-and-forth affair, with the quarter ending at a score of 76-75 in favor of the Knicks. Then, the exact opposite of what happened on Monday night unraveled.

Instead of the Bulls coming through in the clutch, they crumbled under Immanuel Quickley and Julius Randle. Chicago was outscored 37-19 in the final frame, ultimately going on to lose 113-94.

As I said, I give the Bulls credit. New York is one of the hottest teams in the league right now and has won 10 of its last 11 games. The Bulls hung around for as long as they could, and I can’t necessarily fault them for simply being outmatched. The roster isn’t built to withstand the kind of aggressive play this Knicks team brings to the court, especially after two similarly tough matchups with the Miami Heat. Not to mention, this team also isn’t built to withstand poor officiating (not many teams are).

I hate to be that guy, but there is no question the refs played a role in the Bulls’ demise. Billy Donovan, Nikola Vucevic, and Daniel Theis all drew technicals for a reason. I’m not saying this game would not have had the same outcome if it weren’t for them, but I do think we could have seen a much tighter finish.

The Bulls now sit at 26-36 with 10 games remaining and (thanks to the Wizards crushing the Lakers tonight) now 2.0 games back of the 10th seed. Next up is the Bucks and Hawks. Oh, and there is still no timetable for a Zach LaVine return. Isn’t life great? 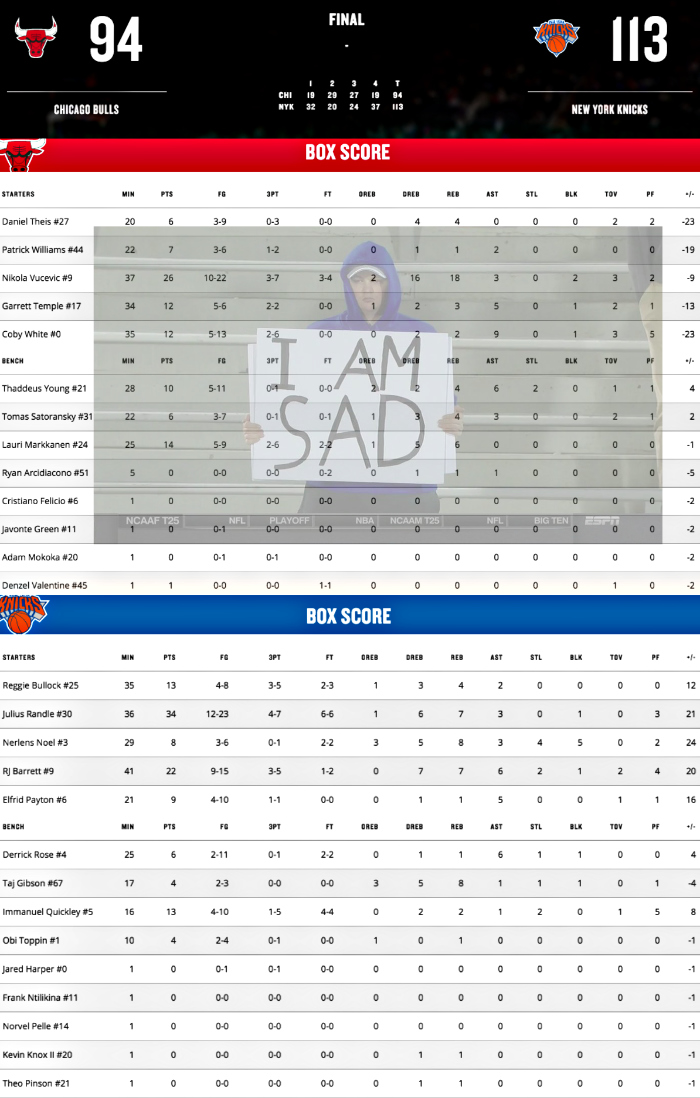