Been There, Done That: Things Seem to Be Pretty Rough Behind the Scenes for the Indiana Pacers Skip to content 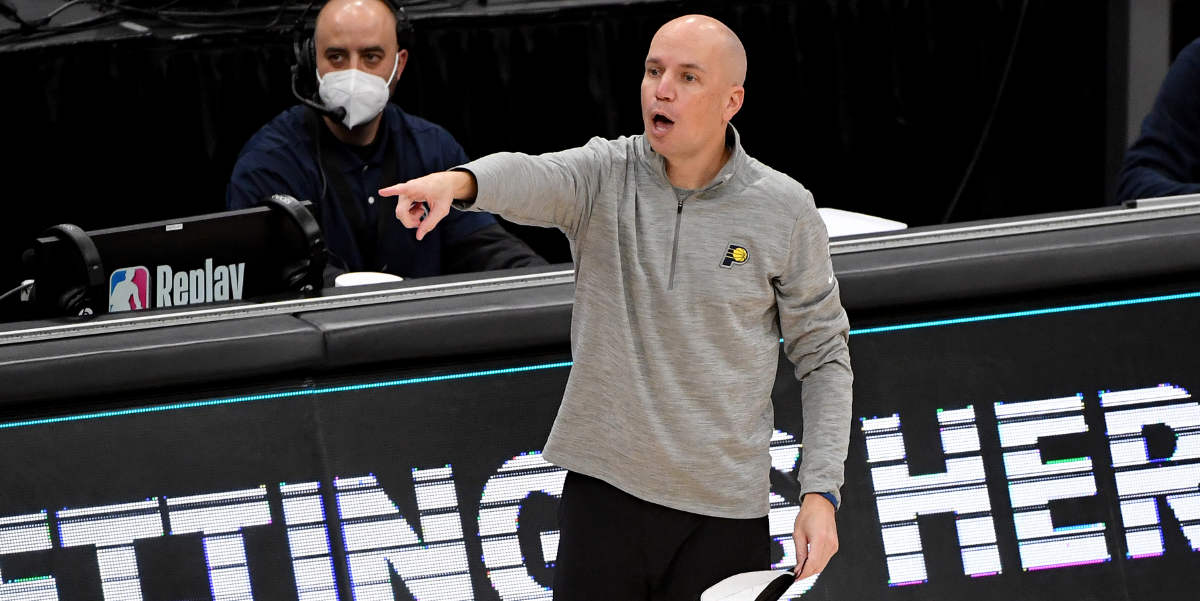 Considering the Indiana Pacers have a better record than the Chicago Bulls, we probably shouldn’t be one to talk … but – damn – if it isn’t nice to NOT be the organization having a very public meltdown for once!

ESPN’s Adrian Wojnarowski reported on Tuesday that Pacers first-year head coach Nate Bjorkgren has found himself in some hot water. Bjorkgren’s communication on and off the court has been questionable, and he reportedly has work to do to strengthen his relationship with several players on the roster. The Athletic also added to the conversation, reporting that Bjorkgren’s “abrasive style” has caught players and coaches off guard.

While he is indeed far more invested when it comes to coaching in accordance with modern-day NBA thinking, Bjorkgren’s abrasive style has come as a surprise — in interactions with players and his own coaching staff members — and led to the kind of frustration that has caused significant concern. It hasn’t been reserved merely for the players, either, as several sources cited instances where Bjorkgren’s personality and tendency to be controlling with assistant coaches and other staff members caused unnecessary tension.

Hm, where have I heard something similar before [gives the stink eye to Jim Boylen]?

The Pacers have lost four of their last five games, including last night’s 104-93 loss to the 29-37 Sacramento Kings where this locker room turmoil came to a head.

In the middle of the third quarter, assistant coach Greg Foster apparently got on Pacers big man Goga Bitadze for not protecting the rim better. Then, after Bitadze went down the court and splashed a three, he chirped over at Foster to “sit the f— down,” which didn’t go over too well when a timeout was called.

Goga Bitadze drills a three and tells his assistant coach Greg Foster to “sit the f*** down”. Foster took exception to that. pic.twitter.com/AYbaBmsfzF

The altercation led to the Indiana Pacers organization suspending Foster for a game, which he is likely to serve tonight, and fining Bitadze an undisclosed amount of money.

Pacers are suspending assistant Greg Foster for one game and fining Goga Bitadze for exchange on court Wednesday, sources tell ESPN. Foster and Bitadze have had a strong working relationship this season and that’s expected to continue, but emotions are running high in Indiana.

This one instance may not have included head coach Bjorkgren, but I think it goes to show just how toxic of environment he is running behind the scenes. And if Bulls fans have learned anything in recent years, it is hard to reverse a bad first impression.

Anyway, it will be interesting to follow where this goes over the next couple of weeks. The Pacers sit 9th in the Eastern Conference are bound for a play-in tournament berth. However, whether or not they can hold their ground over the next seven games is up for debate. After the Hawks on Thursday, the Pacers will finish out the regular season against the Wizards, Cavaliers, 76ers, Bucks, Lakers, and Raptors. With the way they have been playing, that schedule may not be kind, but that also could be the least of their worries right now.