Thanks for Nothing (Again) Cavs, Looking Forward to the Offseason, LaVine Out, and Other Bulls Bullets Skip to content 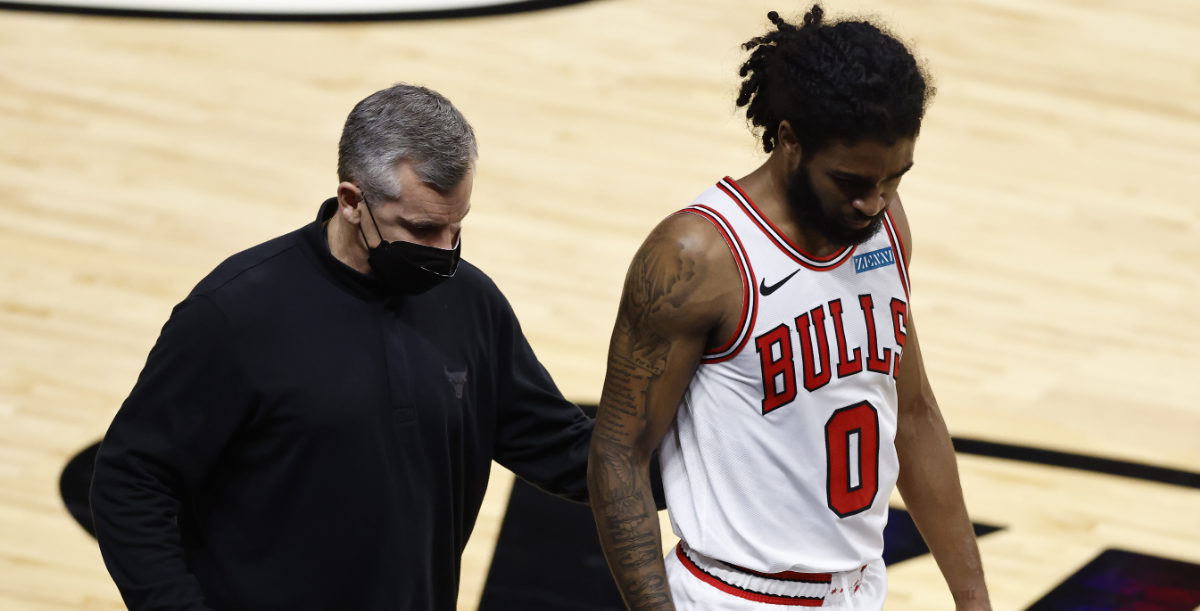 The day has come.

With a Washington Wizards victory over the Cleveland Cavaliers, the Chicago Bulls will officially miss the playoffs for the 4th-straight season.

The Chicago Bulls Have Officially Been Eliminated From the Playoffshttps://t.co/QK28s1RvIe

•   The odds were just never in the Bulls’ favor as catastrophic losses to teams like the Orlando Magic and Cleveland Cavaliers started to stack up in April. Then, the team not only struggled to mesh all their new pieces after the trade deadline, but Zach LaVine couldn’t stay healthy. Right after the first-time All-Star looked rejuvenated from an ankle injury, he was put into the NBA’s Health & Safety Protocols, and that was basically all she wrote in Chicago There is no question this is frustrating. It’s is the longest postseason drought since the early 2000s, and it sucks. Plain and simple.

•   At the same time, I would be lying if I told you I didn’t let out a tiny sigh of relief when seeing the Wizards’ score. Whether they stole the 10th seed or not, the second half of this Bulls season proved to us this team is still not ready for a bigger stage. The organization has taken encouraging steps forward this season, especially internally where the culture appears to be much improved, but the fact of the matter is this roster is still broken. This front office knows that too, and it is why we saw the roster turnover begin at the trade deadline. Arturas Karnisovas and Marc Eversley were also open about the fact this season would be one of evaluation. With that in mind, I have to assume this outcome was anticipated in some capacity.

•  Big decisions were always going to be made based on what happened in this first season under the new regime. Now, it’s time to make those big decisions, which is exactly why I let out my sigh of relief last night. The trade deadline – albeit not as immediately impactful as we all hoped – was a much-welcomed breath of fresh air. This team needs new faces and a new image, and it’s exciting to know that process will continue over the coming months. After all, Karnisovas didn’t say “we’re not done” on March 25th for no reason. We are going to see some movement inside the Advocate Center, and that could very easily be more fun to follow than this up-and-down season.

Bulls fans in our mentions realizing they lost to us twice pic.twitter.com/09HFnsIvK7

•   The Cavs don’t owe the Bulls anything, so I guess they can troll if they want. On the other hand, it’s a tough look to play your “making fun of another team” card when you’re nearly 10 games below that team in the standings. Not to mention, the Cavs are literally using a meme from an iconic game where Derrick Rose beat them on a nasty buzzer-beater. I guess that is kind of their point? I don’t know, it still misses the mark a bit, in my opinion. Final Verdict: Six out of ten on the “Good Burn Scale.”

•   So how should the Bulls approach these last two games? I had some thoughts …

Things we should see over these last two games:

•   Seriously, though, the Bulls have very little reason to (1) try to win and (2) play their starters normal minutes. I do think any game can be important for guys like Zach LaVine, Nikola Vucevic, Patrick Williams, and Coby White to build their chemistry. However, I also think there is no point in risking injury or lottery odds to get that done. The Bulls are one game ahead of both the Kings and Pelicans for having a 26.3 percent shot at a top-4 pick. Win and let either of those teams catch up, and the Bulls could see their chances drop to 17.3 percent.

•   Speaking of which, as I’m typing these bullets, this news drops …

Sato has a sprained ankle. Donovan said LaVine has been battling some minor knee tendinitis and team is being extra cautious.

•   Fortunately, a loss shouldn’t be hard to come by this afternoon since the Nets are going beast mode.

Nets coach Steve Nash says he expects Kevin Durant, James Harden and Kyrie Irving to all play Saturday against Chicago … which would be just their eighth game together this season.

•   Billy Donovan planned to talk to Patrick Williams about being more aggressive, so let’s see if there is immediate payoff tonight in a game where there is little reason for him not to see a bigger workload.

•   One of the best defensive players in NBA history is finally going to get his recognition. According to ESPN’s Marc J. Spears, Ben Wallace will be inducted into the Hall of Fame as a member of the 2021 class. Wallace is best known for his time in Detroit, but he did spend one full season with the Bulls in 2006-07 where he averaged 6.4 points, 2.4 assists, 2.0 blocks, 1,4 steals, and 10.7 rebounds per game. Chicago traded him the following season to Cleveland.

Ex-Detroit Pistons and HBCU Virginia Union star Ben Wallace will be inducted into the Class of 2021 for the Naismith Memorial Basketball Hall of Fame, a source told @TheUndefeated. The 2004 NBA champion was a four-time NBA Defensive Player of the Year and a four-time All-Star. pic.twitter.com/GDcM1YWMbA

Chicago Hoops Already Got Some Serious Love During Hall of Fame Enshrinement Weekendhttps://t.co/z8FVNFlHui