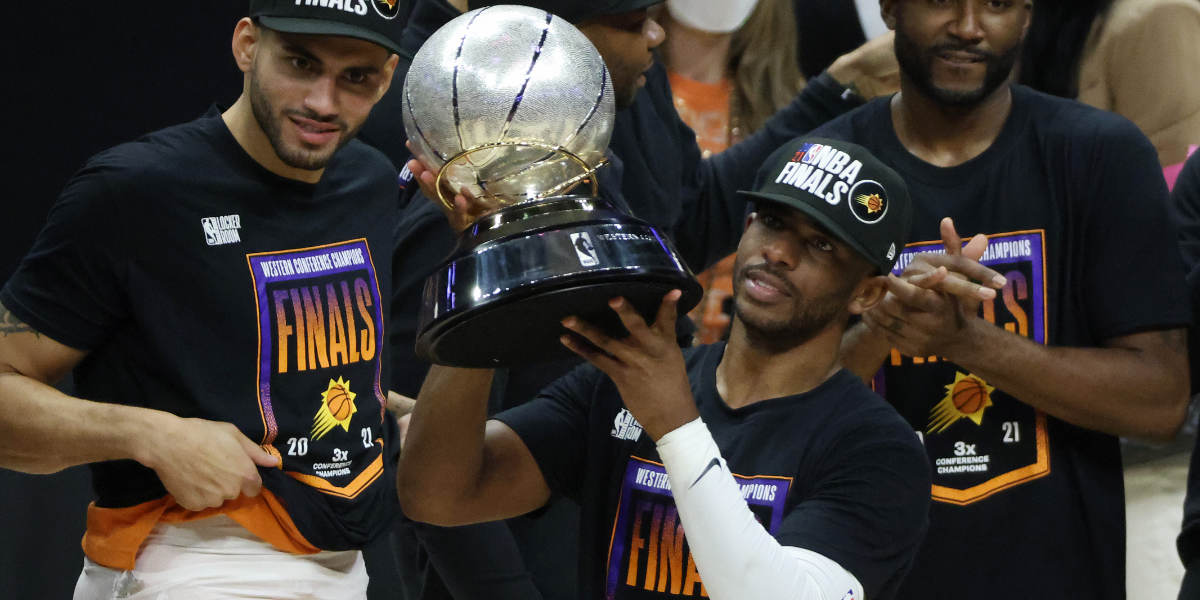 Just saying: The amount of objects in our apartment that my girlfriend has managed to spill her drink on is truly impressive. The coffee all over the couch this morning may have been her best performance yet. Elite stuff. 10/10.

•   Last night was a legacy game for Chris Paul. At 36-years-old, in his 16th season in the league, one of the game’s greatest point guards of all time finally got over the hump. And not only did he do it against his former team, but he did it behind a career-high-tying 41-point performance.

•   Paul scored 31 points in the second half and 19 points in the 4th quarter. He shot 7-8 from downtown after previously shooting 2-16 in the series. After the Los Angeles Clippers brought the game within a close seven points in the 3rd, Paul scored 14 of the Suns’ next 16 points to effectively seal the deal on a 16-3 Phoenix run. Only 35 players have ever scored 41 points in a Game 6. Only two players have ever scored 41 points in a playoff game while over the age of 36. In other words, what Paul did last night was simply not normal. And no matter the team you cover or the fanbase you belong to, that is a spectacle that every basketball fan alive should appreciate.

•   Oh yeah, Paul also had zero turnovers last night. A feat that was probably most impressive to the Bulls.

It's the 2nd-most in a playoff game by a player at age 36 or older in NBA history. Karl Malone scored 50 in 2000 against the SuperSonics. pic.twitter.com/S8IPZH52zY

•   Interestingly enough, while Paul is one of the oldest players in the league, I think he represents this current era of the NBA quite well. Much unlike what we saw from the Bulls in the 90s, elite players rarely call one city home. Paul has pretty much been the epitome of a nomad throughout his career. From New Orleans to Los Angeles to Houston to OKC to Phoenix, Paul has led five different franchises into the playoffs. His “ring chasing” may not have been as overt as other players over the last decade, but he certainly helped paved the way for player mobility.

•   Going along with that, he also helped create this “love the player, not the team” vibe that hovers over the modern NBA. Paul does not belong to one city. He has built a following as he’s hopped around the league, and we saw the power of that last night as he received a round of applause from almost every direction. I don’t mind that the NBA has gone in this direction. Player mobility keeps things interesting in its own unique way. But, at the same time, I do worry even more about a team like the Chicago Bulls being at the wrong end of that fad.

•   Zach LaVine is headed toward a new contract. While we would all like to assume he stays in Chicago and plays a role in attracting new talent, who is to say the script will not be flipped? Watching another superstar switch teams and end up in the Finals could have an impact on his thought process. Similarly, he will be surrounded by tons of superstars this summer while on Team USA. Players with wins in their back pocket can be quite convincing. I guess what I’m saying is that as annoying as all these bad imaginary LaVine trades are by some NBA analysts and fan bases, they don’t come completely unwarranted. LaVine is not committed to Chicago after next season yet, and if he somehow stayed in Chicago for 9+ years (which could be what a new LaVine contract would likely suggest), he would be an outlier in today’s league.

•   The Bulls could be out one of their top assistants this offseason.