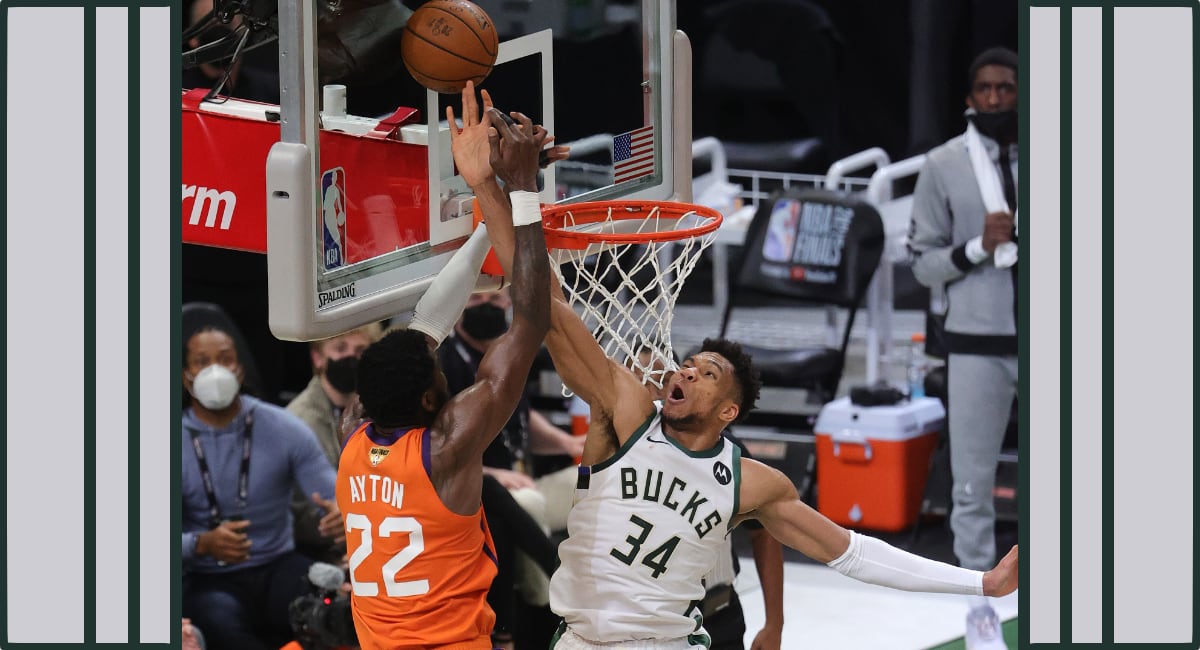 Milliseconds after the 1:14 mark in Game 4 of the NBA Finals, LeBron James appeared on my right shoulder.

“Yup, me!” he screamed while still picking popcorn off his jersey and twisting beer out of his shorts.

Meanwhile, my eyes grew wide, my jaw started to drop, and my arms started to raise. James and Prince turned to each other and then looked up at me: “NO, DON’T DO IT!”

With two simultaneous flicks, I launched both into the depths of my basketball subconscious. This was not the time to think. This was the time to appreciate greatness.

So this is one of the best blocks we’ve ever seen, right? 😱
pic.twitter.com/WKnESV8dNI

•   No matter how many times – or how many ways – you look at Giannis Antetokounmpo’s block on Deandre Ayton, it just becomes that much more impressive. Debates will rage on for years about where that ranks next to Prince’s chase-down swat of Reggie Miller and LeBron James’ stuffing of Andre Iguodala. For now, I would probably place him in front of Prince and slightly behind James. All were remarkable athletic feats, but I do think context helps establish a hierarchy. Prince’s came in a Game 2 of an Eastern Conference Finals. James’ came during a tied Game 7 of the NBA Finals with under two minutes to go. If the Bucks go on to win the series, I do think we could ultimately claim Antetokounmpo’s block as best of the best. But, hey, all three will be remembered forever.

•   By the way, we all know where Antetokounmpo learned to block Ayton, right?

•   What happened between the 2:07 mark and the 27-second mark in the 4th quarter was one of the most clutch sequences I’d ever seen. Middleton took the lead on a smooth mid-range jumper; Antetokounmpo immediately pulled off the stunning block on the other end; Jrue Holiday beat out two Suns players for an offensive board (did not lead to a score but it drained more clock); the Bucks then poked the ball away from Chris Paul, and Middleton converted the fastbreak layup to pull ahead 103-99. As frustrating to watch as this Milwaukee “big-3” can be at times, that was an end-of-game masterpiece.

—Giannis on leaving early in the first quarter in Games 3 and 4 pic.twitter.com/lChrvXy5ZS

•   Props to Booker for doing everything he could.

•   When Patrick Williams is not secretly giving defensive advice to the Greek Freak, he is watching some elite WNBA action. According to Williams’ Instagram story, he was in attendance for last night’s WNBA All-Star Game, which means he also got to watch the Chicago Sky’s Allie Quigley pull off her THIRD 3-point contest victory. Maybe she can give Pat a couple of pointers on his rainbow 3?

"IT'S THE ALLIE QUIGLEY INVITATIONALLL" 😂

•   We got some more troubling news out of Team USA training camp last night. Bradley Beal has entered health and safety protocols only a couple of days after Team USA Select Team members Immanuel Quickley, PJ Washington, and Miles Bridges were also removed due to COVID protocols. FWIW: Beal’s absence should only open the door for more Zach LaVine, but I sure hope he can find his way back on the court soon. The Olympics start in Tokyo on the 23rd.

Wizards star Bradley Beal has entered health and safety protocols at Team USA camp, placing his return to play status up in the air, sources tell me and @joevardon.

•   The headline might as well be, “Bulls Expected to Emerge as Suitors for Every Possible Starting Point Guard.”

•   Another two head coach hires will soon be finalized.

Sources w/ @wojespn: The New Orleans Pelicans and Willie Green are nearing completion on a deal that will make him the team’s next head coach.

The deal is expected to be finalized this week.

Unseld Jr. — the son of Wes Unseld Sr., the Hall of Famer and former Bullet — has been a highly-respected assistant coach since joining the Wizards’ coaching staff in 2005. https://t.co/OBAlIK8xY1