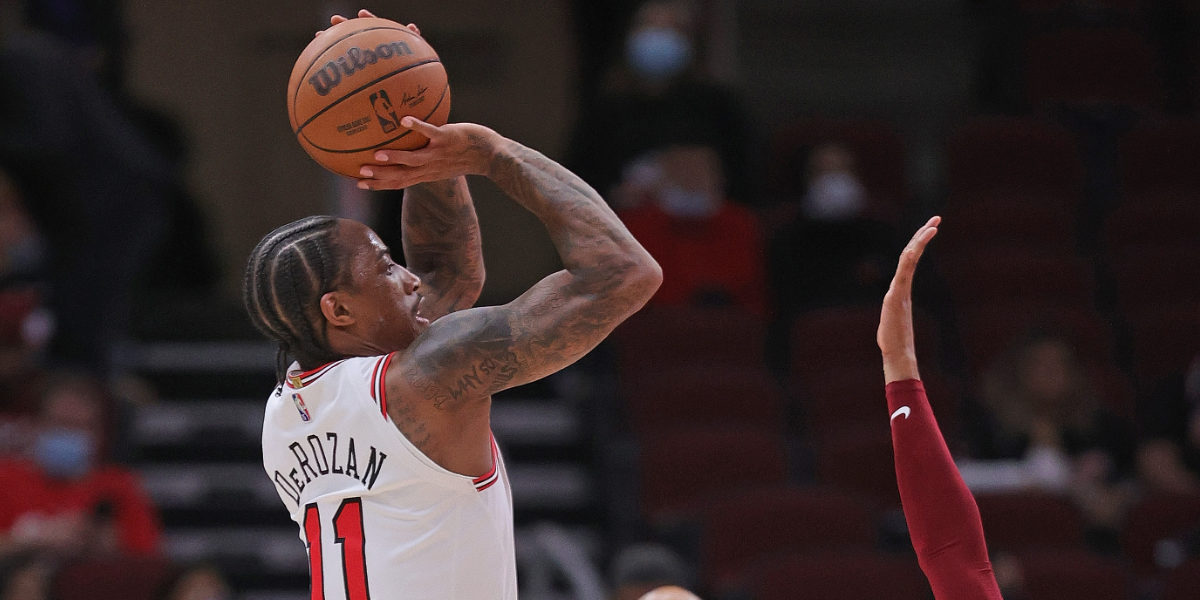 As a four-time All-Star who has an Eastern Conference Finals appearance and eight straight seasons averaging 20+ points per game under his belt, DeMar DeRozan has made his presence felt over his 13 years as a pro. Combine that with his 881 games played – which currently ranks 20th among active NBA players – and I think it’s fair to say the 32-year-old knows this league about as well as anyone.

For the Bulls, DeRozan is a stark contrast from most of the players the organization has rostered in recent years. Then again, this isn’t the same organization. Alongside Chicago’s massive front office overhaul came a massive change in philosophy. Arturas Karnisovas’ brain trust pushed aside a rebuild in favor of establishing an immediate competitive improvement. They locked in on Zach LaVine as the franchise’s young cornerstone and looked to add more experienced talent around him. And you don’t get much more experienced than DeRozan.

Expectations are high in Chicago and skepticism might be ever higher. That combination can become a mental burden for teams, but that’s how DeRozan becomes all the more important. While his aging game and the money he’s owed might be considered part of the Bulls’ “problem,” he can be an even bigger part of the solution.

“I never try to put too much thought on how Vegas or whoever comes up with the odds they come up with,” DeMar DeRozan told Bulls dot com. “Because at the end of the day you don’t know how hard we are working, how bad we want something, how much we are fighting for something. It’s bigger than just somebody’s predictions and how we are approaching it. This is an opportunity of a talented group that has a chip on their shoulders. You kind of run faster when the dog is chasing behind you; that’s the type of mentality we have to have going out there playing this season.”

DeRozan has admired the chase ever since his days in Compton. “Give me the tough route,” he said on the No Studio’N podcast after signing with the Bulls. “Let me make this sh*t look easy.” It’s that embrace of the uphill battle that Chicago has been missing for years. And it’s that experience in the uphill battle that can help steer this Bulls team in the right direction.

Zach LaVine might be Chicago’s star player, but his leadership can only take them so far. He doesn’t know what life looks like in the playoffs. Hell, he doesn’t even know what life looks like during a winning season. The potential for him to learn those things is abundantly clear, but that is why DeRozan has been tagged to help show him the ropes. The willingness to do so on DeRozan’s behalf has been center stage, and it’s likely why he has sounded not at all worried about the potential fit between the two on this heavily offensive-minded team.

“It’s not rocket science. It’s not rocket science at all,” DeRozan said on Media Day. “He has a passion for the game and the love and the appreciation to want to win. And the knowledge and everything that I have gained over my years of being in the league and being in different situations and seeing success and playing with all types of players, I understand what it takes. So, for me, it’s putting in the hard work and understanding each other. Not just me and him, [but] as a team, as a collective.”

The preseason is the preseason, but DeRozan looked like a genius in Tuesday night’s opener. The Bulls’ offense flowed effortlessly as the natural bucket-getter didn’t seem to butt a single head. He worked within the confines of the system and walked out of the game with 13 points, 4 assists, 4 rebounds, and 2 blocks in a well-rounded 25 minutes of action.

Again, it’s only one game, but he backed up his comfortable and confident talk with quite the impressive walk.

“Me being on another team the last three years taught me a lot as a player, as a person, as a man, the maturity,” DeRozan told reporters after the game. “And just understanding the more years you get in this thing you start to realize you really got to enjoy it because it goes by so fast … You just at a point now where you have to enjoy everything that comes with it. At this point in my career and my life, it’s just enjoying it. You only get to do it for so long.

Be it the experience, the hard work, or the sheer joy, DeRozan brings a mix of talent and perspective that every team looking to take the next competitive step needs. I don’t know exactly where the Bulls will go from here, but I do know DeRozan is ready for whatever comes next.