A Different Kind of Challenge, Facing the MVP, Lonzo and Caruso's Defense, and Other Bulls Bullets Skip to content 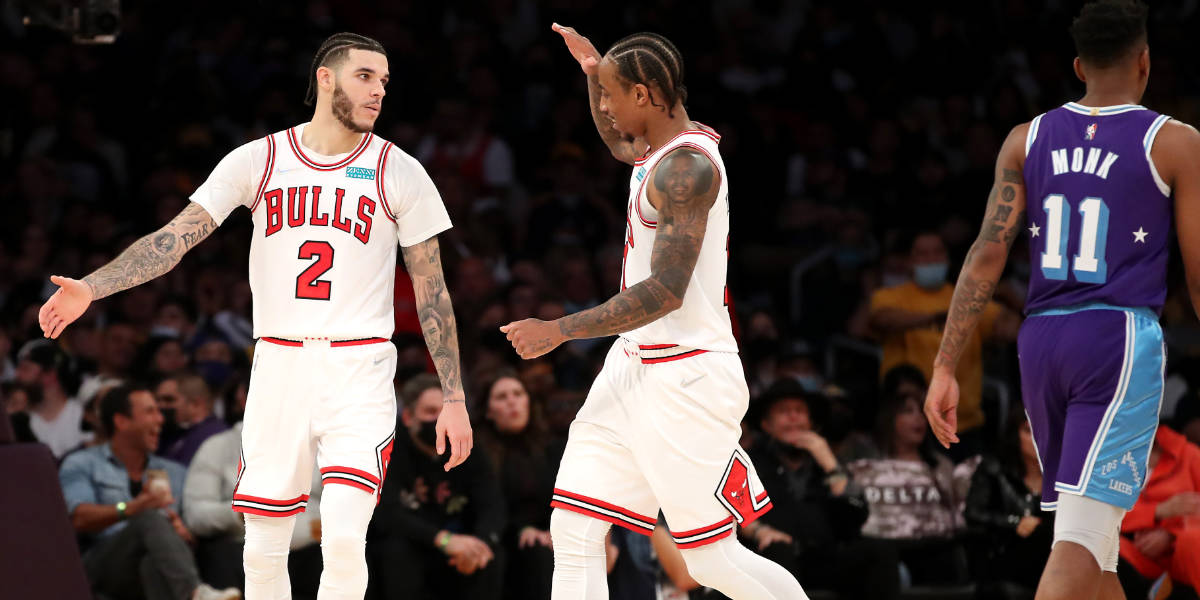 Aside from back-to-back losses to the Philidelphia 76ers, every time this Bulls team has needed to bounce back, they have. After a loss to the Knicks, they took down the undefeated Jazz. After a loss to the Warriors, they shut out both LA teams at the United Center. The Bulls have done a great job of taking each game as its own new challenge. And while I expect them to do so tonight, as well, I still can’t help but feel a tad worried we are about to see the second losing streak of the season.

•   As resilient as this Bulls team has been, they have yet to suffer a loss as bad as they did on Wednesday night. Sure, getting destroyed by the Golden State Warriors hurts, but it’s arguably easier to shake off a blowout than it is a blown 20-point lead.  Combine the ugly loss to Portland with the fact that Chicago now has to cap off a grueling five-game road trip without their All-Star center against the reigning MVP … and tonight feels like one of the tougher challenges of the season.

•   The good news is that I probably still consider this road trip a win even with the team’s 6th loss of the season tonight. No, a 2-3 showing isn’t ideal, but I would have been content with it before the plane took off last week. After all, sweeping the Clippers and Lakers is still something to hang your hat on, especially with Vucevic back on his couch in Chicago. The other good news is that the Bulls get to catch the Nuggets on the backend of a back-to-back. Denver suffered quite the embarrassing loss to an Embiid-less Philly team last night 103-89. While normally playing a vengeful team is a bad thing, I’m not sure if playing a vengeful and tired team is the same thing.

•   Still, how the hell are the Bulls going to control Jokic (who is averaging 24.6pts, 13.6reb, 6.4ast)? I don’t think anyone would have expected Vucevic to be a Jokic-stopper, but at least he would provide a comparable battle on the glass and offer a similar-sized body down low. With that being the case, I have to imagine Tony Bradley would see even more minutes than usual, which only worries me more since the big man has struggled to look aggressive the past few games. The other option, of course, is to just accept that Jokic will do Jokic things. Chicago might be best suited to focus their defensive energy on the supporting cast. Run Will Barton off the 3-point line, tire Aaron Gordon out, and don’t forget about someone like Monte Morris. Jokic will individually beat most teams on most nights, but keep those other guys under control and you could walk away with the game.

•   Another bonus for the Bulls is that the Nuggets depth is a tad questionable. Much like the Bulls second unit, the Nuggets bench averages the 5th-fewest points per game. Likewise, they shoot a pretty dismal 39.5 percent from the floor, which ranks 23rd in the league. In other words, tonight would be a great night for Coby White to find some rhythm! The opportunity will be there for the Bulls to eat up points while Jokic and Co. are off the floor, and the Bulls must take advantage of that opportunity.

•   Alex Caruso and Lonzo Ball have quickly become one of the NBA’s most elite defensive combos. Ball’s size and ability to read passing lanes combined with Caruso’s instincts and ability to break through screens has been pivotal in helping the Bulls achieve the 7th-best defensive rating. When you have guys who can execute this well at the POA and along the perimeter, it allows head coach Billy Donovan to simply ask for effort from the rest of the gang. Anyway, The Ringer’s Kevin O’Connor did an amazing breakdown on what these two bring to the table, and I highly recommend you give it a watch.

•   Well, that’s because it was! The NBA’s last-two-minute report ended up ruling that the above play on DeRozan should have been a shooting foul. If you remember correctly, that means he would have gone to the line with 13 seconds left down 108-107. Without that, the Bulls were forced to foul Larry Nance, who made both FTs, and the hope for Zach LaVine to knock down the game-tying 3 on the next possession. Now, to be fair, Tony Bradley should have also apparently been called for a foul on the hard screen he sent during that ATO. HOWEVER … we may have never even got to this point if DeRozan just got that stinkin’ foul call. UGH. WHATEVER. CURSE YOU REFS!!!

•   You’re damn right DeMar DeRozan is in the mix.

•   I still can’t believe what this dude is doing.

Thursday was Stephen Curry's 3rd career 40-point game with 1 or no free throw attempts, passing his Splash Brother, Klay Thompson for the most in NBA history.

They're the only 2 players in NBA history with multiple such games.

Two of Curry's games have come this November. pic.twitter.com/ZAJZ3DXnPp

•   I bet you can guess like four of these items: “10 Things Dennis Rodman Can’t Live Without”

Ope! It Sounds Like Some Teams Regret Passing on Justin Fieldshttps://t.co/AEcJPFW0a3