Derrick Jones Jr. Has Done Everything the Bulls Have Asked ... and More Skip to content 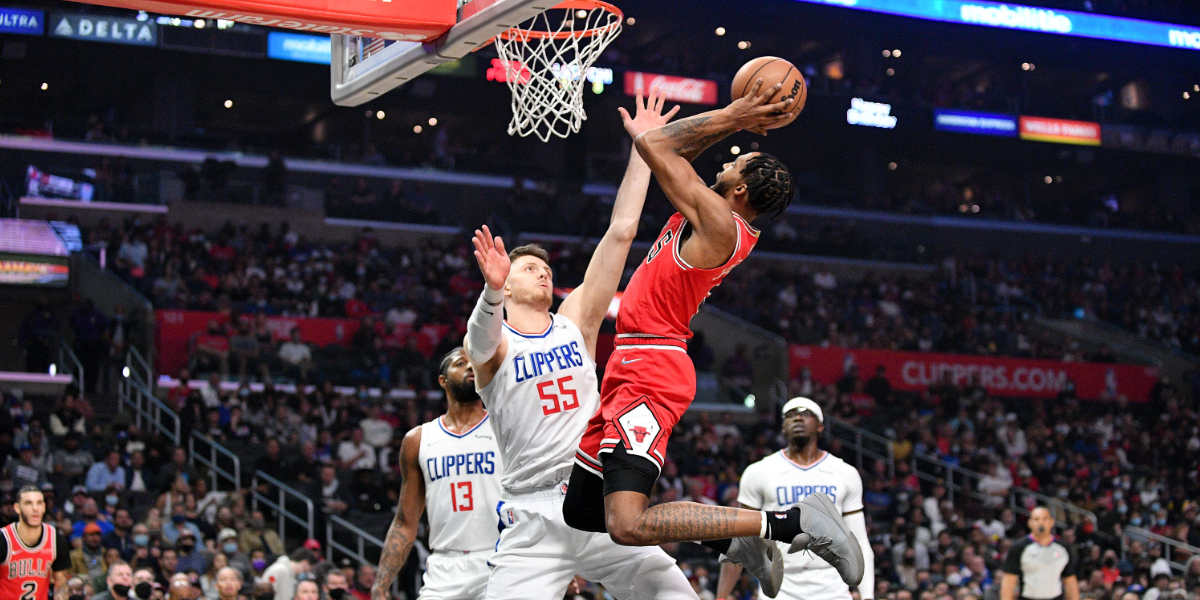 When the Chicago Bulls tipped off their season against the Detroit Pistons on October 20, Derrick Jones Jr. was on the outside looking in.

The athletic forward came to Chicago as part of the three-way trade that sent Lauri Markkanen to Cleveland and Larry Nance Jr. to Portland. While the logistics of the deal came as a surprise, the fact Jones was tied to a first-round pick did not. Jones was one of the first players rumored to be on this front office’s radar once they arrived. However, as a young and athletic forward who played a significant regular-season role on the Finals-bound Miami Heat, others around the league had their interest. The Portland Trail Blazers were ultimately the team to ink Jones to a two-year,$18.9 million contract –  a deal worth the full mid-level exception.

Jones would appear in 53 games for the Blazers, starting 43, but the organization’s willingness to part ways with the 24-year-old made it clear that year one didn’t go as played.

In Chicago, the Bulls had a multi-positional defender and transition threat that seemed to fit what Arturas Karnisovas and Co. were building, which is why it was surprising to see Jones out of the rotation on opening night. Five games then passed by with the same results. And considering the Bulls were off to a 4-0 start, it did not feel like an opportunity was coming for Jones to make an impression. If it isn’t broke, don’t fix it, right?

But … what if it’s dislocated?

Unexpectedly, an opening for Jones appeared. Patrick Williams suffered a dislocated wrist that required surgery in the team’s first matchup with the New York Knicks. Chicago was now down their starting power forward, and with very little size on the depth chart, it was time to give Jones and his seven-foot wingspan a closer look.

Over the next two games, Jones might as well have made head coach Billy Donovan look silly for not playing him sooner. He played a vital role in taking down the NBA’s final undefeated team, the Utah Jazz, with four blocks, three rebounds, and a +18 performance. Jones did nothing but the same in the Bulls’ next battle with the Boston Celtics. Down 19 points, he was a key part of the Bulls’ monstrous comeback, scoring nine points with two blocks and four rebounds. Chicago went on a 36-12 run against Boston during Jones’ final 10:26 on the floor.

No one is claiming Jones is responsible for both of these winning efforts, but he did play the kind of winning basketball needed to pull them off. And he has continued to do just that over the last 11 games, even stepping into a small-ball center role he has never once played in his career.

Let’s stop there for a second. I can’t stress enough how impressive Jones has been at the five so far this season. While his seven-foot wingspan and insane verticality give him advanced rim-protecting capabilities for a player who stands just six-foot-six, it’s still pretty remarkable how good these lineups have been. The five-man unit that features Lonzo Ball, Ayo Dosunmu, Zach LaVine, Javonte Green, and Jones has been a +8.3 thus far, per Cleaning the Glass. Throw Jones at center with Caruso, Dosunmu, DeRozan, and Green instead, and the lineup sits at +18.6. The sample size may not be the highest right now, but those are still encouraging results with two different lineups, especially considering the bulk of these possessions came on the team’s tough five-game road trip.

But, regardless of whether Jones is stationed at the four or five, it’s clear that he’s making quite the positive impact on the Bulls frontcourt. His +9.1 on/off efficiency differential ranks in the league’s 80th percentile and is by far a career-high, per Cleaning the Glass. And if we look closer at the things Jones is doing on the floor, it’s not hard to see why he makes such a positive impact.

We all knew Jones would contribute on the defensive end. The ultra-athletic and lengthy forward is a talented perimeter defender who can also provide excellent help defense. He currently sits second on the team in blocks (12) behind only Lonzo Ball (13), who has appeared in four more games. But where the real surprise has come is Jones’ reliability on the other end of the floor. Donovan has increasingly involved him in pick-and-roll action instead of strictly using him as a lob threat or cutter. Jones’ 1.29 points per possession rank 20th among players who have appeared in 10 or more games, per NBA Stats. No, that isn’t a career-high, but that’s also largely because the frequency in which he is acting as the roll man has skyrocketed.

For example, last season with the Trail Blazers, Jones did average 1.50 PPP out of the PnR, but it also came on just 16 possessions. Jones has already surpassed that total with 17 possessions as the roll man this season. Now, if we go back to his two full seasons in Miami, we do see an uptick in his PnR action and a slight uptick in his PPP (the Heat used him much closer to how the Bulls have). However, even then, Jones only saw 24 possessions and 38 possessions, respectively, which he appears on pace to break this season.

In other words, Jones is currently getting more opportunities than normal to work out of the PnR, which isn’t too promising to see come stapled to a slight decline in his efficiency. But, here, it’s encouraging to know that decline still ranks within the league’s top-20.

Derrick Jones Jr. never played a minute of center in his career before this year. He was found money as a roll man for the Bulls on this road trip. Excellent move by Billy Donovan.

Three big buckets on the roll vs. the Nuggets last night: pic.twitter.com/0ieXsDUXFU

Another area where Jones has thrived so far this season has been on putbacks. Playing closer to the basket, the Bulls have put him in a better position to use his verticality and complete plays. He is currently 8-12 on putback opportunities, which ranks in the league’s 85th percentile, per NBA Stats. Over the past three seasons, he has never found himself outside the 59th percentile.

Combine these two things with Jones’ high-flying abilities in transition, his well-timed cuts to the rim, and his defensive instincts, and the Bulls have a jack of all trades coming off their bench (well, that is if we forget about the iffy jumper). The question now is precisely how his role might change upon Nikola Vucevic’s return. While I don’t expect any decline in minutes, as he will be the primary backup power forward, I predict fewer opportunities at center with Tony Bradley rejoining the bench. Part of me hopes Donovan finds a way to still use these lineups with Jones at the five to get the most out of him. If that’s not in the cards, however, I’d still love to see a little more designed action to get him rolling to the rim for an easy bucket or trip to the free-throw line.

I guess I should say I’d love to see a little more from Jones overall. The guy has so far done everything this team has asked to do with flying colors, and his presence alone has been vital in making this team appear deeper than many initially expected.