Next, Next ... Next Man Up Mentality, Vucevic is Having Fun, DeRozan is Elite, and Other Bulls Bullets Skip to content 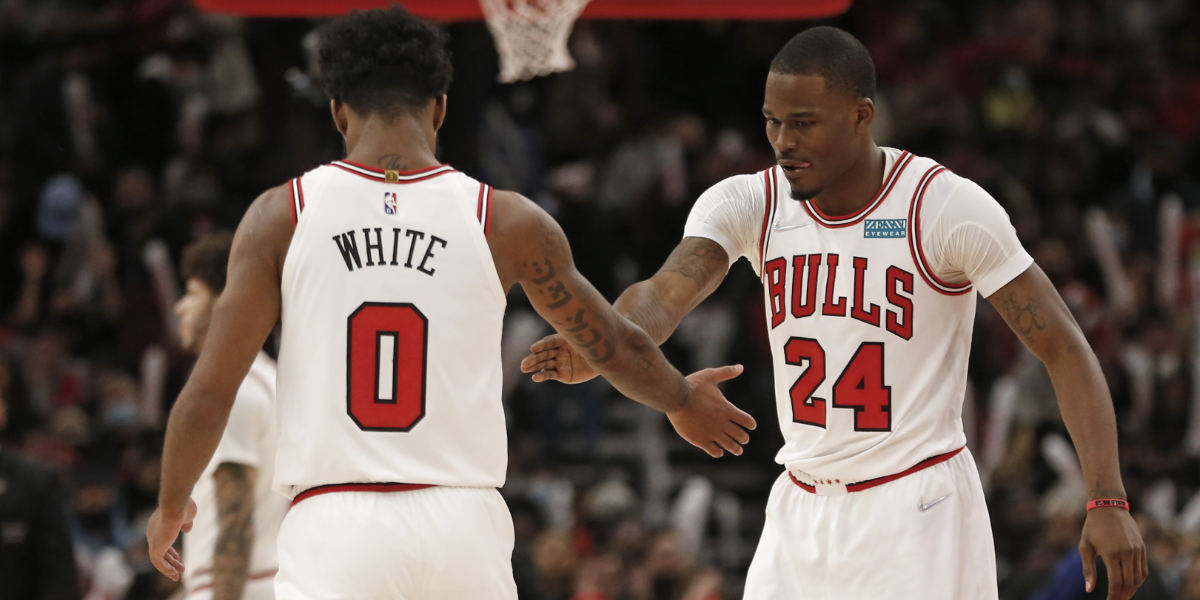 I just want to start today off by saying I hope everyone is staying happy and healthy.

The world is a weird and chaotic place, but I’m hoping your holiday season has been as good as it can be considering the circumstances. Hey, at least the Bulls keep winning, right!?

•   The Chicago Bulls “Big 3” did it again. DeMar DeRozan, Zach LaVine, and Nikola Vucevic combined for 72 of the Bulls’ 113 points against the Indiana Pacers last night. In the last four games this trio has appeared, they have averaged 78.5 points, and the Bulls hold a convincing 4-0 record. While LaVine and DeRozan have carried the largest workload, arguably the main reason for this recent dominance has been the gradual improvement of big man Nikola Vucevic. Initially struggling with one of the worst starts of his NBA career, Vucevic has slowly but surely found his way alongside his two fellow All-Stars. He has averaged 21 points in his last four games with those two in the starting lineup, and he has posted 18.8 points per game with 10.0 rebounds in the team’s last 10 contests.

•   Chicago can’t ask for much more than what Vucevic gave them last night. The big man was a jack of all trades on both ends of the floor, stuffing the stat sheet with 16 points, 15 rebounds, 3 assists, 2 steals, and 2 blocks. He played a role in holding Pacers star Domantas Sabonis to just 14 points on 5-17 shooting, which made for the big man’s 3rd-worst shooting performance of the season. When we consider the help he now has around him (specifically the elite scoring ability of LaVine and DeRozan), the mix of a tertiary scoring role, primary rebounding role, and solid defensive effort is what we want to see from Vucevic on a nightly basis. The fact we know he can provide even more than that in some games is gravy.

•   When you throw a bunch of former No. 1 talents together, it’s hard to predict what you’re going to get. Hence all the underwhelming predictions from analysts far and wide this offseason. However, if those players are willing to surrender some of their touches and use their elite skills to play off one another … this 20-10 record from the Bulls is exactly what you get.

“This feels great,” Vucevic said after the game (via Bulls dot com). “When you play to win everybody has fun, good things happen, every one is involved; it’s been fun to be a part of this. And especially for us coming with this whole new group of guys and we didn’t know how things were going to work out and for us to be this good early on, it motivates you and gives you that energy to keep going and keep growing this team and getting better.”

•   No Alex Caruso. No Lonzo Ball. No problem? I wouldn’t go that far, but the Bulls did a pretty solid job without their two best defenders against a Pacers team that holds the 11th-best offensive rating in the NBA. The activity on that end of the floor was what you’d want to see, as they held Indiana to under 100 points until the final 3:22 to go along with an 8-30 performance from behind the arc. While I can’t imagine the Bulls find this same level of success against teams higher up in the standings, it’s still encouraging to know the Bulls can lock in on that side of the ball without arguably their two best tone-setters in the rotation.

•   And, once again, this seems to be what makes the new Bulls so special. No matter how many players (or coaches) are stuck on the sideline or in quarantine, we can trust that those in uniform will play to an identity. An expectation has been set for the first time in a long time.

“Everybody’s been that next man up,” LaVine said after the game (via Bulls dot com). “Everybody has been staying ready and when their name is called they come in and know exactly what to do; they play their role. I think everybody has accepted their roles very well and has just done whatever it takes to win. We’ve had that mentality since training camp. And we haven’t, obviously, listened to a lot of the critics. We really put a chip on our shoulder. We’ve been good with guys out, and that’s saying a lot.”

•   I think DeRozan might be the GOAT of not listening to critics. Despite repeatedly having people refer to him as the worst signing of the offseason, as well as someone who doesn’t necessarily fit today’s game, he has maintained his spot among the league’s top-6 scorers. Over the last six games, he has scored 183 points, which is his most in a six-game stretch since the 2017 season. So, yeah, the Bulls didn’t just sign a veteran scorer, they signed one of the best in the league.

DeRozan has been on a TEAR ♨️ pic.twitter.com/kJ1k6MBJa9

•   This video is the epitome of DeMar DeRozan.

I can’t stop watching this …

•   While I still think Matt Thomas could be on the chopping block over the next couple of months, I guess his 19 minutes last night shows us what the organization thinks of him.

Matt Thomas was a game-best plus-16.

Fleming: "We did not plan on playing him as long in the first half. But I thought our team had a flow. We got the lead in that phase. And we just kind of let him go."

just witnessed one of the better halftime shows ive ever seen in Cleveland. these kids are electric. crowd is going nuts. pic.twitter.com/heIV1OI6nS

•   I still can’t believe the Bears won this game.