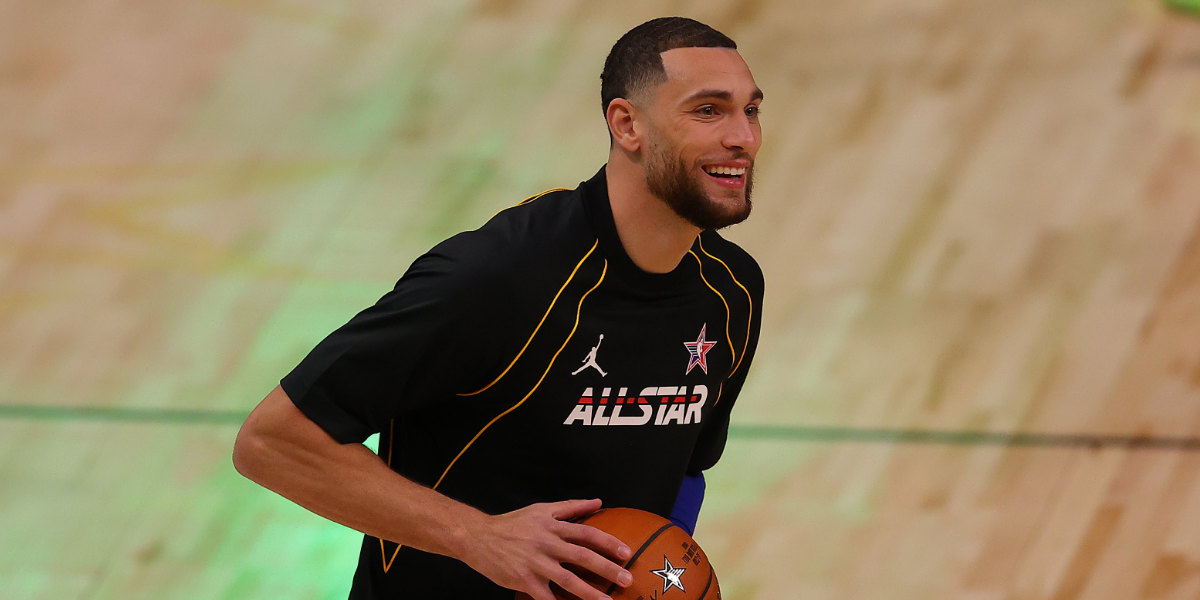 The show goes on!

When these two guard each other on Sunday 👀 pic.twitter.com/uIhuSw8gHY

•   Zach LaVine will keep the Chicago Bulls representation going tonight as he takes the floor for the 3-point shootout. This will be LaVine’s third-straight season competing in the event as he strives to become the first player in NBA history to win both the 3-point and dunk contest. This will also be the first time we see LaVine in action since his February 11th performance against the Minnesota Timberwolves. He surely didn’t look like himself in that Bulls victory, scoring just 12 points on a 5-14 shooting performance from the field. Fortunately, a trip to see a specialist for his lingering knee issue brought nothing but positive news. The All-Star had some fluid drained from his knee earlier this week, and he was given the green light to resume basketball activities as normal. WOOHOO.

•   LaVine failed to make the finals in each of his previous 3-point contest stints. Neither was a particularly poor performance, but specialists like Buddy Hield in 2020 and Stephen Curry in 2021 went on to prove why they have two of the best shooting strokes in the business. LaVine is shooting 39.9 percent from distance so far this season, bumping his average over the past three seasons up to 40.0 percent. He is converting his catch-and-shoot looks at a 48.8 percent clip this year, which is a career-high. While he still may not come to the top of mind when thinking about the league’s elite shooters, he has surely become one … so is the third time the charm?

•   If one thing is for sure, LaVine knows he will not move his money ball rack from the corner. The All-Star reserve made the mistake of placing this key rack at the top of the key in 2020, and he knocked down just two of the shots. Last season, he opted to start with the money balls in the corner, sinking the final three of five. I do have wonder if he’ll keep it there or decide to put it on the opposite corner to finish more in rhythm, but we shall see.

For his third 3-point Shootout at All-Star weekend, Zach LaVine still has the strategic error he made at the 2020 event in Chicago on his mind.

In other words, the money balls will be on the corner rack.

In Chicago, LaVine placed those at top of key.

•   FWIW: Zach LaVine has the sixth-best odds to win the 3-point contests, per Fanduel Sportsbook. He checks in behind Luke Kennard, Patty Mills, Fred VanVleet, Trae Young, and Desmond Bane at a +700. He’s got no lack of motivation, if you ask me.

•   When the ball tipped off, Ayo Dosunmu was the one to set the competitive tone. The Bulls rookie quickly scored dribble-drive layup past No. 1-overall pick Cade Cunningham before he poked the ball away in transition and sank a quick-trigger 3. Those ended up as the only two buckets for Dosunmu, who also went on to finish with 2 assists and a steal. His squad lost in the first round to Team Barry by 3 points.

•   Still, while the box score may have underwhelmed, Dosunmu earned every moment of recognition that came his way last night. He was the lowest selected rookie among the 2021 class to appear in the event, but he looked the part alongside some of the league’s more renowned young names. Zach LaVine and DeMar DeRozan also sat sideline to support their teammate, focusing their superstar-studded attention in his direction. Now, Dosunmu will be able to return the favor in the next few days as he also dissects the brains of some of the best in the game.

🗣 THAT MAN IS A RISING STAR

•   Since no game that includes a Chicago Bulls player can happen without a bump or bruise, Ayo Dosunmu apparently jammed his thumb toward the end of last night’s game. He told NBC Sports Chicago’s Rob Schaefer after the game that it happened on a chase-down block attempt: “I hit it on the rim. It bent back.” I did get back and review the play, and Dosunmu didn’t seem to noticeably react to anything at the time. He also seemed to play out the remainder of the game comfortably. As of now, we don’t seem to have any reason to believe it’s anything more than a jammed finger, but it’ll be something to keep an eye on. The good thing is he has plenty of time to relax before the team suits up again on February 24th.

Ayo Dosunmu was favoring his right thumb after Rising Stars game. Said he was going for a chasedown block, banged it on the rim and it bent back

"It was funny, though. We made people laugh. We may have got some followers."

Tyrese Maxey & Scottie Barnes after going 0/6 from the layup spot in the CLUTCH CHALLENGE 🤣pic.twitter.com/yJlQXotiwU

•   ZACH ATTACK ABOUT TO GET BUCKETS.

•   Please start Spring Training so I can go on vacation.