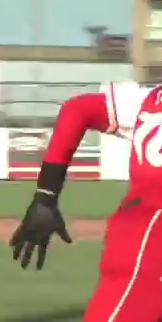 The Cubs’ farm system is in the middle of a profound change, a change that likely began when Theo Epstein signed on the dotted over the winter. We can see aspects of that change in a number of places, but none of them are more readily apparent the transformation that has occurred on the base paths. The era of the Chicago Cubs being a station-to-station offense is nearly over. The minor league Cubs run. They run regularly, they often run unsuccessfully, but they do run consistently. Whether we are talking about expected speedsters like Logan Watkins, breakout players like John Andreoli, catchers like Micah Gibbs, or highly paid elite talent like Javier Baez and Jorge Soler, the Cubs’ prospects are nearly all running.

Of course, this being the minor leagues, they often run themselves into outs instead of extra bases. That is simply part of the learning process and is something that should not distress us. The better these players become in the minors, the better they will be in the majors. And that is important, because I do not think the running Cubs are going to be a purely minor league phenomenon. I think we are seeing an organizational change that will manifest itself at the major league level just as soon as the Cubs’ have the players capable of doing so. Personally, I think it is definitely a change for the better.

Iowa – Iowa won Saturday’s suspended game 10-8. The Cubs were not fortunate in Game Two; they lost the nightcap 3-2.
Tennessee – Another day, another shutout. Tennessee again blanked the opposition and earned a 4-0 win.
Daytona – Mother Nature had no mercy on the Cubs. Sunday’s doubleheader was cancelled due to unplayable field conditions; the games will not be made up.
Peoria – Peoria fell behind in the first and could not recover the lead as they lost 6-5.
Boise – Boise jumped out to an early lead, but it was not to last. The Hawks lost 10-9.
Arizona – Like Boise, Arizona also jumped out to an early lead before falling in the end. The final tally in the desert showed a 10-8 Cubs loss.