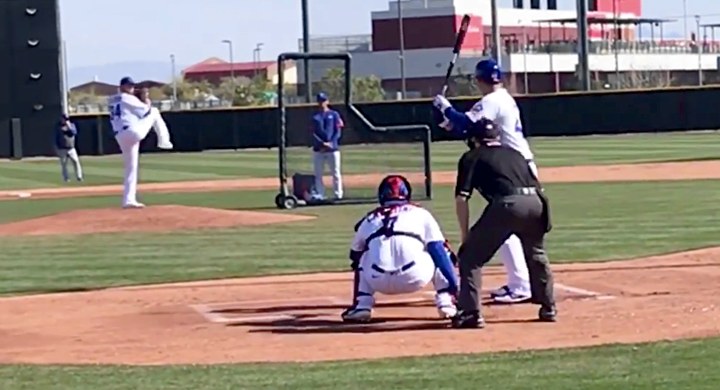 It was Picture Day at Cubs camp, which means everyone was all decked out in their finest pinstripes, with smiles aplenty.

As Ross walked off field to head to different part of workout, he asked someone to turn the music up: “Let’s get these guys rockin’ and rollin’!” pic.twitter.com/R6bmh5inN4

Bryant facing Lester in live BP. Lester jammed him with an inside cutter, breaking Bryant's bat, to which KB muttered: "dangit"

Ross on why umps didn’t call balls and strikes with Lester pic.twitter.com/w8JX50dH8o

"It's a whole new chapter for all of us."

Year 1 under Rossy has officially begun. Check out the full feature on February 22nd! pic.twitter.com/2FcosbDXfi

Javy up the line in bunt drills, with the third basemen staying back?

"I didn't see that. What was going on?" Ross said with a smirk.

Baez led MLB with 19 Outs Above Average in '19. With his skill, Cubs might test some different things for '20. pic.twitter.com/kXtU0GCD8i

Ready to run through a wall. pic.twitter.com/I1uaHGMfMD