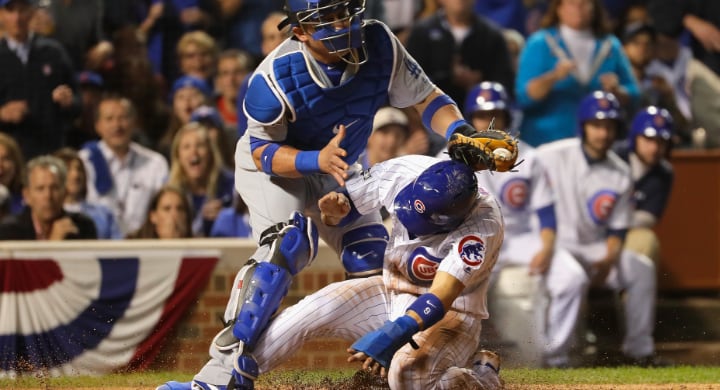 In the absence of baseball (grumble), Marquee Sports Network is re-running the top-14 games from the Chicago Cubs historic 2016 World Series run. And since I freakin’ love that idea, I thought we might play along by posting regular Pre-Gamin’ posts before each and every one. This is the fourth televised event – Game 1 of the NLDS was Wednesday, Game 2 was Thursday, and the series clinching Game 4 was Friday. Like the Cubs four years ago, we’re moving onto the Championship Series.

Before we jump into the rest of the post, I want to point out that two of the most memorable Cubs moments of my entire life (including the World Series) happened in this game: (1) Javy Baez accidentally stealing home in the freakin’ NLCS and (2) Miguel Montero’s game-winning grandslam. We still had a lot of huge moments ahead of us at that point in postseason, but those two plays, in particular, just made me lose my mind with wild, animalistic cheering. I don’t think I’ll ever forget them. Really.

Alright, guys. We’ve been here before. And although the NLCS wasn’t kind to the Cubs in 2015, they’ve got a whole different look this season.

Jon Lester is taking the ball for the Cubs tonight, and he’s coming off an excellent NLDS Game One start, plus 15 consecutive scoreless innings against the Dodgers, who just don’t hit lefties all that well. Naturally, with Lester on the mound, David Ross is behind the plate, which leaves Miguel Montero’s big bat on the bench. Maybe he can affect the game as a pinch hitter later on.

I also like Javy Baez in these postseason starting lineups. He may have finished the regular season with a 94 wRC+, but he’s got the ability to create something out of nothing. I mean, the guy can basically turn a bloop single into a run, if he wills it. He must stay in this lineup.

Let’s get out to an early series lead, eh Cubs?