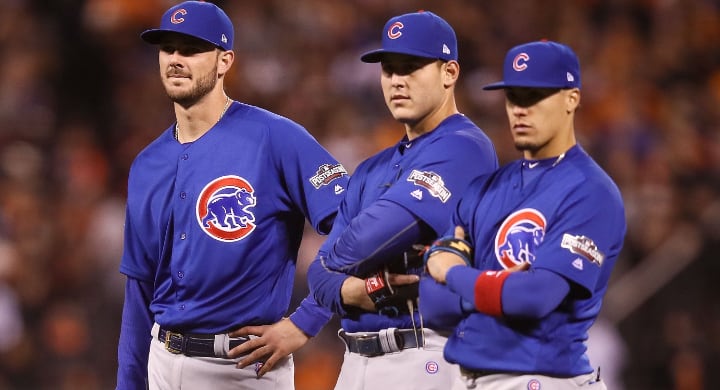 Have we heard it before? Yup. Does it mean anything will be different this time around? Nope. But do we still have acknowledge the report and note that it squares with our expectations? Sure.

Buster Olney’s column today includes a small section on the Cubs, and their need to make changes to the roster despite a challenging financial environment. There, he reports what other teams are picking up from the Cubs:

In conversations with other teams, the Cubs are signaling there will be significant turnover on the roster, with a willingness to move almost any veteran – as well as just about anyone from the core group of position players who won the 2016 World Series, including shortstop Javier Baez.

Although it will surprise some to see Báez’s name included there, I don’t know that anyone can regard it as quite that surprising. If ever there were a time when “everything is on the table,” that time is now. I think it’s more likely than not that the Cubs would like to sign Báez to an extension – arguably moreso than any other player on the roster at the moment – but if a team wants to make a substantial offer on Báez, the Cubs are clearly in a spot to listen, especially when other one-year pieces likely wouldn’t command much of anything in trade.

To that end, I circle back to the Cubs “signaling there will be significant turnover on the roster.” We know the four one-year guys (Báez, Kris Bryant, Kyle Schwarber, and Anthony Rizzo) get talked about a lot, but let’s actually break that down a bit. We don’t see Rizzo being traded, and Báez is highly unlikely. So really, you’re talking about Bryant and Schwarber, both of whom have put themselves right on the cusp of a non-tender in this crazy environment. Is moving those two, alone, “significant turnover”? Hard to say it is, unless you’re talking about that Bryant-Nolan Arenado swap.

So, then, let me reiterate that everything is going to be on the table. Longer-term controlled guys? Yup. Very high-value guys? Yup. If the Cubs actually want to turn over the roster in a way that is meaningful for the future, they’re going to have to consider moving more than just a couple guys who might get non-tendered anyway if things are particularly financially dire.

Which brings me back to the thing that all roads keep bringing me back to this offseason: the most sensible paths forward for the Cubs are either to just run back as much of the roster as possible for a final hurrah in 2021 (I don’t like that approach, but they could be very competitive), or sell off significantly in an attempt to turn things around quickly (and with some length) for 2022+. Making just a couple changes to the roster by unloading Bryant and Schwarber (making the team worse in 2021, and also not improving for 2022+) is the worst of both worlds. The Cubs no doubt see that reality, hence Olney’s report that other teams perceive the Cubs to be willing to move “almost any veteran.”