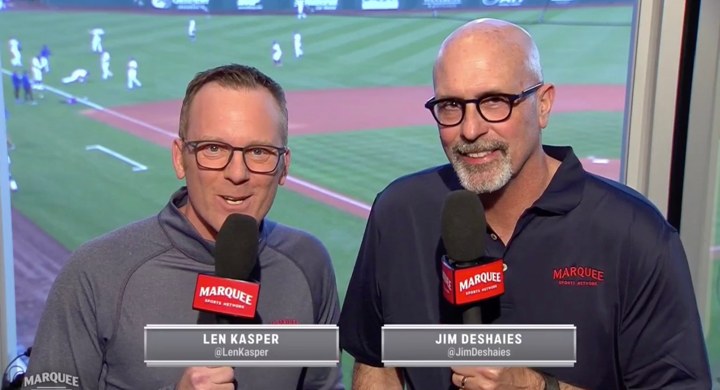 The kiddos got an instant camera for Christmas – one of these types that spits out the physical picture – and it is fascinating to me to observe what they want to take pictures of, and then what they want to do with the pictures when they’re developed. I’ve already been gifted some really sweet ones, but I’ve also been the subject of some humorous candids.

•   The Marquee play-by-play search seems to have gone quiet for a bit, but I’d expect we’ll learn of the new booth person soon enough. In the meantime, a great read on Len Kasper’s departure:

Len Kasper opens up to @BarryRozner about why he left the @cubs TV booth for the @whitesox radio booth.

Kasper: "When you get to middle age your priorities — and what has deep meaning to you — changes."

•   At a human level, I think the more you read about Kasper’s decision, the easier it is to understand. Life grants you only so much time and so many opportunities – if you’re fortunate enough, and talented enough, to have options like Kasper has had, you might also want to try a new challenge before it’s too late. He’d always thought about doing radio, his first love, and with the pandemic happening and age 50 approaching and an opening in the city of Chicago, it’s almost like … how could he NOT jump at the chance?

•   Bonus fun from that Daily Herald piece: “My parents have almost never missed a game I broadcast and they’re already figuring out ways to listen to White Sox games,” Kasper said. “But when I told them over Zoom about my decision, my dad said, ‘Can I still root for the Cubs?’ I said, ‘Of course.’ He can still watch the Cubs, but he has to listen to the Sox.”

•   Speaking of Marquee, I listened to a recent interview Jed Hoyer did with Ryan Dempster – the timing of the recording wasn’t entirely clear – and it seemed like maybe Hoyer isn’t planning to conduct his full GM search until after the pandemic clears a bit and he can spend more in-person time with candidates? On the one hand, that might strike you as a silly reason to wait on such an important hire, but consider that (1) Hoyer has already been with the Cubs, so it’s not like the Cubs are desperate *IMMEDIATELY* for brain power to lead the organization – it’s kinda status quo in most ways; (2) Hoyer wants someone from outside the organization to bring a fresh perspective – which means it’ll be someone he’s not necessarily super familiar with – but also wants to have the kind of close relationship with this person that he had with Theo Epstein, where there’s an implicit trust (so that you can really push back on each other). That could require a really personal interview process that would indeed be tough right now. Getting it right is a lot more important than getting it done this offseason.

•   I’m thinking that if teams hadn’t been scared of the extremely unorthodox swing, Jordan Nwogu wouldn’t have been there for the Cubs in the third round:

•   And I don’t want to discount the concerns about the swing, because it just doesn’t look easily translatable to the big leagues, with the upper and lower halves out of sync:

•   But that said, everything else about him is something you love. The write-ups after the draft were effusive, he raked in college, he is physically so projectable, and clearly Bryan has heard good things about how his post-draft time in the organization has gone. Can’t wait to see him actually facing pros next year. I expect some extreme highs and extreme lows for now.

The Rays traded for me in 2017, their record isn’t exactly spotless. https://t.co/lnOVDOS0Na

#MLB needs less 100 MPH and more of this: pic.twitter.com/RrQaV0UQmn