Better Than the Cardinals? On the Playoff Bubble? Some Last Minute Projections Are Surprisingly Kind to the Cubs Skip to content

We’re less than a day away from the first pitch of the 2022 MLB season, which will, incidentally, take place at Wrigley Field. And by now, I think we all have a pretty good sense of what’s on tap in Chicago. At best, the 2022 Cubs are a team in transition, with a handful+ of potentially impactful long-term pieces at the big league level, a few top prospects waiting in Iowa for their promotion, and maybe a ~10% shot at making the postseason. Nothing you’ll read here today is going to change that reality. HOWEVER …

… I want you to see some of these last minute projections/rankings, because they were surprisingly kind to the Chicago Cubs.

Let’s start with The Athletic’s Preseason Power Rankings from Grant Brisee and Levi Weaver. On the surface, ranking 22nd in MLB is nothing to be proud of. Relative to their league, the Cubs are 10th, and relative to their division, they’re third. But the attendant write-up is notably brighter:

You can understand why there would be optimism. Seiya Suzuki is electric. They have contact wunderkind Nick Madrigal for a full season. They’re bullish on Clint Frazier, who has always had the raw talent to thrive. Marcus Stroman can be a legitimate ace, and Kyle Hendricks is convinced he’ll bounce back …. This is riiiight about the spot in these rankings where the postseason teams dry up. But if you look at the Cubs under a magnifying glass, stroke your beard and assume that 20 different things can all go right, you can see it. You can see them skipping a few steps in the rebuilding process and going straight to reloading.

On the bubble of the potential postseason teams? Being able to see it so soon? Skipping straight to reloading? I don’t know if I was just way too pessimistic before today, but this is a much more positive review than I expected anyone to serve up in early April. But then, we’ve touched on this before, right? The Cubs need so many things to go right to compete, sure, but they also have so many things that COULD go right — more so than most teams in their position, I’d wager.

But if that wasn’t the level of optimism you were seeking when you clicked on this post, I think Keith Law’s NL Central projections should do the trick: 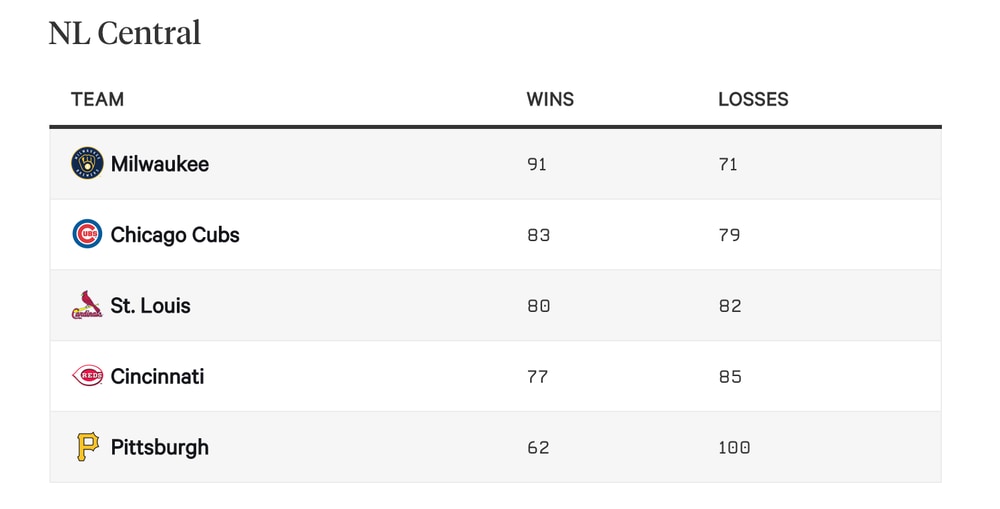 Projecting 83 wins – and a second place finish in the NL Central (ahead of the Cardinals!) – is BY FAR the high water mark of preseason expectations for the 2022 Chicago Cubs. It’s still not enough to sneak into the postseason picture (the Mets, Phillies, Padres, and Giants are all ahead of the Cubs among non-division winners), but it certainly puts them in the right range.

Law expanded on his position (this is just part of the Cubs write-up, so be sure to head over to The Athletic for more), and it’s not difficult to agree:

I don’t see a real path to contention here unless, say, Nico Hoerner and Clint Frazier both have big breakout years, but I also think they’ll be more competitive than most teams are a year after a fire sale, and that’s good for their fans and the sport in general.

If you knew Frazier and Hoerner, in particular, would stay healthy and productive all season, you could immediately tweak your expectations for this club – in 2022 and beyond. But obviously, we don’t know what the future will hold for either, and unfortunately, if the Cubs aren’t obviously competitive come July, I’m guessing we’ll still see a sell-off that will make even 83 wins feel like a pipe dream.

Either way, I thought we all deserved a dose of optimism before Opening Day, and these two reviews are as positive as they get for the 2022 Chicago Cubs.