MLB Playoffs Recap: Day One Sees the Cardinals Blow It, Mets Get Blown Out, More Skip to content 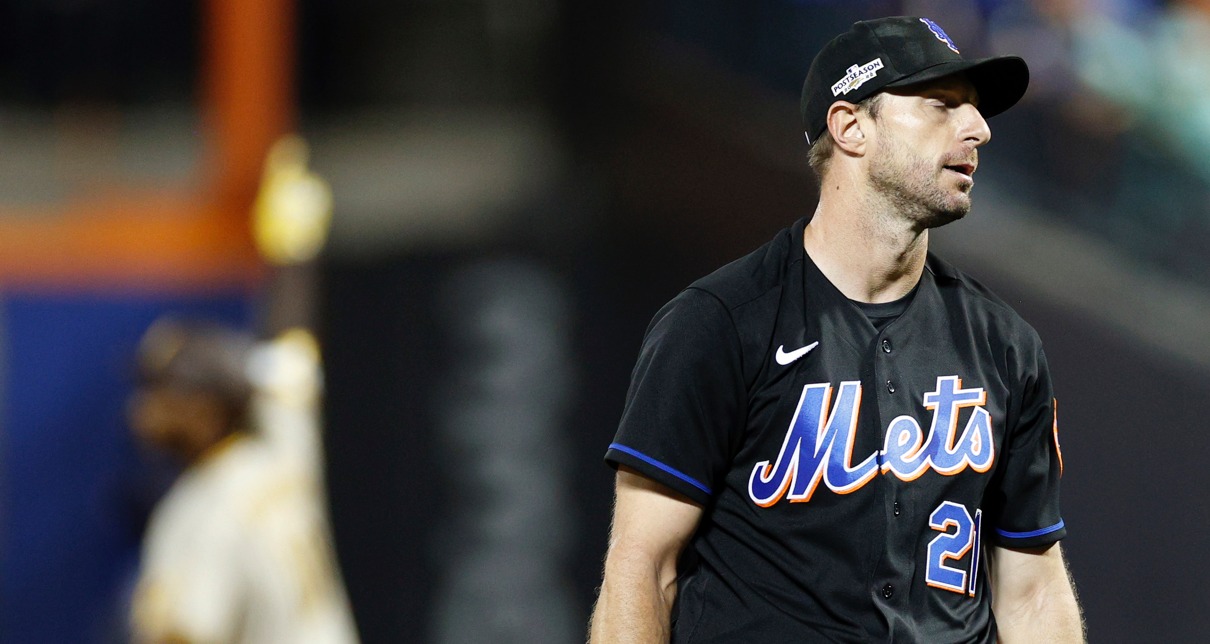 I don’t know about you, but yesterday was a four-for-four in my own personal MLB Playoff rooting interests. And two of those wins were PARTICULARLY delicious …

I got into this one yesterday as it happened, since it was so delightful. The short version is that the Cardinals carried a 2-0 lead into the 9th inning, and gave up 6 runs to blow it.

The longer version is that Jose Quintana was tremendous, and the bullpen pre-Ryan Helsley’s loss of control was great, too. But Helsley had nothing, the Phillies were just patient enough to take advantage, and Jean Segura managed to squirt an impossible-to-hit pitch past a drawn-in infield to give the Phillies the lead. It was really fun to watch.

Oh, and Yadi Molina struck out as the tying run to end the game. So that’s fun, too.

Elsewhere in deliciousness, the Padres TOOK IT TO the Mets immediately last night, and wound up hitting FOUR homers off of Max Scherzer, which has apparently never happened to a Mets starting pitcher in postseason history before.

Unbelievably, Mets fans loudly booed Scherzer as he was pulled from the game. I understand there is frustration, but good lord. Booing Scherzer? That’s ridiculous.

Meanwhile, Yu Darvish threw seven innings of one-run ball, because he’s awesome. I’ll admit, it’s hard in those moments, when you’re watching him last night, to not think about the trade from the Cubs and wonder if they REALLY had to do that, or if it was REALLY the right move. Darvish wouldn’t have made the difference for the Cubs in 2021 and 2022, so there wasn’t anything lost there, but obviously now we’re talking about wanting the Cubs to go out and add a front-end starter. Ah well. At least Darvish is a free agent again after next season …

Game Two is at 6:30pm CT tonight on ESPN, with the Mets having to break out Jacob deGrom before they hoped they would. He’ll try to save the Mets’ season against Blake Snell.

Unlike the two NL games, I didn’t have a strong rooting interest in this one, though I’m happy to see the Mariners do well, given the long playoff drought. Plus, Cal Raleigh’s nickname is the Big Dumper. Am I supposed to NOT root for a guy nicknamed the Big Dumper?

The Big Dumper hit a two-run homer in the first to open the scoring on Alex Manaoh, who ultimately gave up two more in his relatively short outing. On the other side, Luis Castillo was everything the Mariners traded for him to be (and then extended him, gosh darnit). And then apparently the Mariners have a guy named Andres Muñoz who throws 103 mph out of the bullpen, and he wrapped the game up. Definitely one of the great things about the postseason is that you get exposed to guys like that, who somehow evaded your radar (despite being a stud this year – how did I sleep on this guy?).

Game Two is at 3pm CT this afternoon on ESPN, with Robbie Ray facing Kevin Gausman.

I also don’t have a STRONG rooting interest in this series, but because I live in Ohio, and because Columbus is actually pretty full of Guardians fans (the Columbus Clippers are their Triple-A club, and we go to those games sometimes), I do kinda like to see the Guardians do well. Also, after 2016, knowing how crushing that must have been for what is now the longest World Series drought, I wish nothing but well for those fans.

Anyway, it was a pitcher’s duel, with Shanes McLanahan and Bieber (pitchers named Shane is the new market inefficiency) matching each other nearly pitch-for-pitch. The difference in the game is that Bieber gave up a solo homer to Jose Siri, and McLanahan gave up a two-run shot to Jose Ramirez.

Game Two is today at 11 am CT on ESPN2, with Tyler Glasnow (back, and pitching to save the Rays’ season) facing Triston McKenzie. I love the MLB Playoffs, man.