The Bears May Continue to Express "Commitment" to Mitch Trubisky, But They're Willing to Change Skip to content 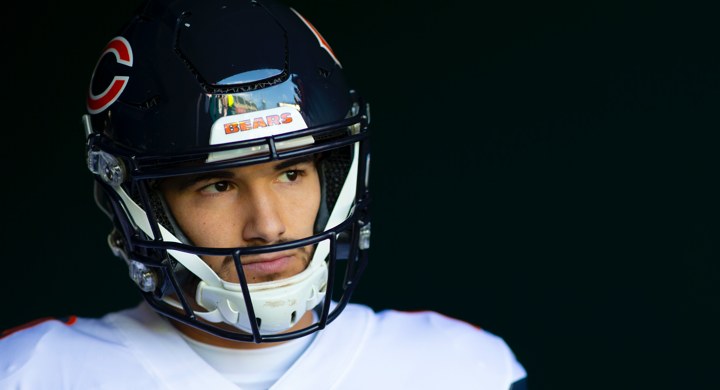 It’s true that most would agree the dream scenario for the Bears quarterback situation features Mitch Trubisky taking monumental developmental steps forward from now until Week 1 and becoming the franchise quarterback for a decade. But the reality is that the Bears have to set themselves up to compete in 2020 — even if that doesn’t happen. And that might mean Trubisky is not the starting quarterback for most of the season, despite any lip service behind paid by GM Ryan Pace and Head Coach Matt Nagy before the new league year kicks off.

That’s why, when the Bears talk about “competition” around the roster, and talk about needing to add to the quarterback room – there are two openings, after all – it just shouldn’t be that hard to read between the lines. Maybe the Bears aren’t out-and-out looking to replace Trubisky this offseason, but they sure as heck seem ready to bring in at least one more quarterback who could capably steward this team to the postseason if the rest of the roster clicks and it doesn’t for Trubisky.

Hence all the quarterback rumors, and hence this discussion point from Adam Jahns today in his latest mailbag:

I’m not 100 percent convinced that Trubisky will be their Week 1 starter in 2020. What the Bears say publicly and talk about behind closed doors is different.

As Kevin Fishbain and I wrote last week, when the Bears started to use the word “competition” to describe their quarterback situation, it was a signal to the league, from agents to rival GMs, that they’re open for business.

It also means that they’re willing to change. Call it a contingency plan if you want, but it could very well turn into a replacement plan. I know what Pace has said about Trubisky on the record, but the team’s actions will mean more.

What the Bears talk about behind closed doors, eh? Willing to change, eh?

With free agency coming soon, and the trade market figuring to percolate, we’re going to have a better sense soon enough about just how willing the Bears are to turn that “contingency plan” into a “replacement plan,” as Jahns puts it.

The main takeaway here? It’s further confirmation that the public “commitment” to Trubisky is not etched in stone, as we’ve said before (to say nothing of the fact that there hasn’t yet been a public commitment on his fifth year option). If things proceed well or a better option doesn’t emerge, then cool, fine, he’ll get a shot in 2020 to keep growing. But if it’s not going to happen for him, and there’s a better short-term option acquired in the coming months? The Bears aren’t going to hesitate to make a change.

If you want to still hope on Trubisky? Fine by me. But you should also hope the Bears add a quality option, just in case.

A reminder of the many, many quarterback options available in free agency and trade.