Eberflus Reaches Out, Butkus Has Hope, Hall of Fame Fans, Detroit Rams, and Other Bears Bullets Skip to content 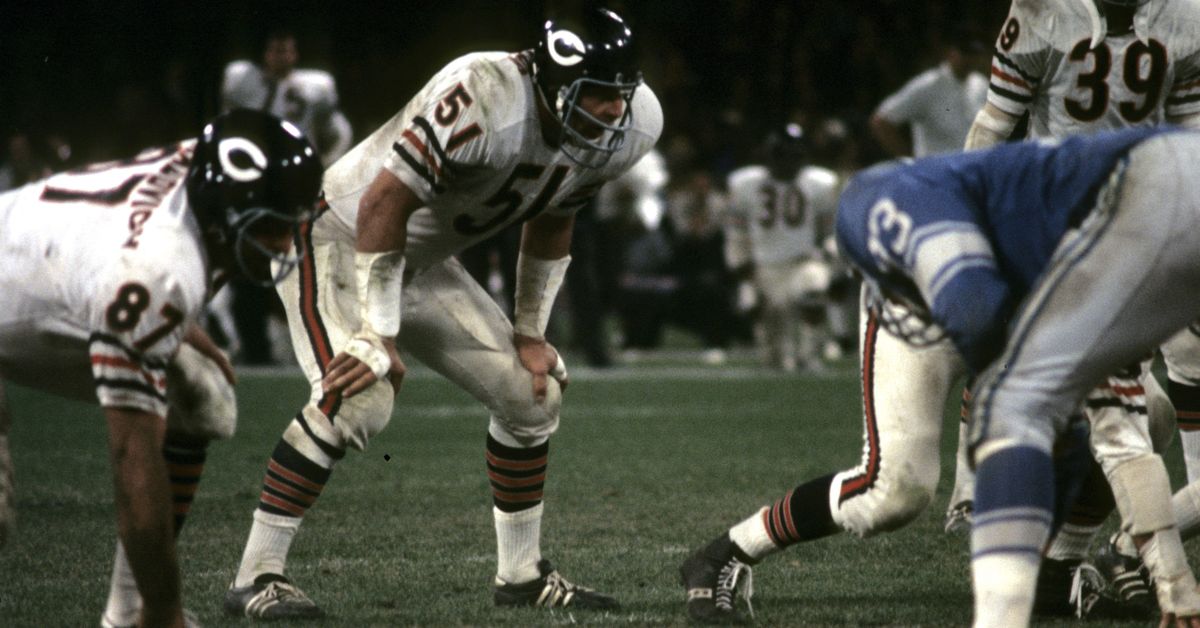 I’ve got a lofty Saturday to-do list that involves cleaning, baking, and shopping. Not all at once, of course. That would make such a mess!

•   One of the cool things about stepping back into a normal-ish Super Bowl in 2022 is that we’re getting more clips, quips, and soundbites from reporters with boots on the ground at the game site. And among the most notable catches came from NBC Sports Chicago’s Adam Hoge, who caught up with Pro Football Hall of Fame left tackle Jimbo Covert. The Bears legend relayed something neat, sharing with Hoge that new Bears Head Coach Matt Eberflus has already reached out to him. “Matt sent me a text, which I think was really classy,” Covert told Hoge. “Just introducing himself and saying, you’re welcome here any time. And you know, that’s really the first time I ever got that from any other coach.”

•   It is a small gesture, but oftentimes those small tokens of appreciation are bigger than you might otherwise expect. Covert says he plans on visiting the Bears in the spring. And I can’t help but wonder if he’ll have others who join him at some point during the offseason. Various former players have made it known that they’d like to reach out and help the organization in any way possible. Jerry Azumah went as far as to publicly request an open line of communication between the front office and the team’s alumni. None of this is to say that former Bears should be running this thing just because they are former Bears. But this franchise would be wise to take any and all good, well-intentioned advice that it could get. It’s not as if the other ways have been working wonders.

•   There’s a bunch of really good stuff in this Dick Butkus Bleacher Report AMA. Among the tidbits is a reply to a question about the potential of the Bears’ current defense with a new defensive voice leading the charge:

Matt [Eberflus] is not gonna be working with an empty cabinet, he’s got some players he can use on defense. He may have different ideas on how to get even more out of these players. Just like Buddy Ryan did with the 46 defense. They molded that defense to the guys they had and were unbelievable. So hopefully he’ll have some ideas to improve these guys even more.

•   We often talk about the value of getting new eyes on old problems. But when it comes to the Bears defense, it’s more like getting new eyes an opportunity to give some studs a fresh look. Chicago’s defense doesn’t need a tear-down and rebuild. Sure, it has needs. But, as Butkus so eloquently put it, Eberflus isn’t working with an empty cabinet. The Bears have some ballers. They’ll need more. But after seeing what the Eberflus gang got out of that Indy defense gives me hope with Khalil Mack, Robert Quinn, Roquan Smith, and Jaylon Johnson leading the charge.

•   One month after his firing, Matt Nagy still continues getting wailed on. This time, a former player checks in:

Offensive lineman Ted Larsen was with the Chicago Bears during the 2019 season when Matt Nagy was the head coach.

Larsen said on Instagram that he got "hammered by that terrible offense. Just like Mitch Trubisky, Jordan Howard and Allen Robinson."

•   Mitchell Trubisky took a step back from the 2018 season, but Allen Robinson II caught 98 passes for 1,147 yards, and 7 touchdowns. And Jordan Howard wasn’t even on the team in 2019. Even if he was, I’m unsure if his decline in 2018 was more about Nagy’s offense or the general decline of running backs as they age. After gaining 935 rushing yards on 250 attempts with 9 scores in 2018, Howard has since put up 991 rushing yards on 240 attempts with 13 scores in 24 games. So … I’m not sure what to fully take away from this snap shot of Ted Larsen’s comments. Other than when the Bears were needing offensive line help and Larsen was available, it now makes sense as to why the team was never connected to him.

•   To be clear, I’m not denying the failures and shortcomings of Nagy’s offense. But I think it could be contextualized better. After all, it’s not as if there isn’t ample evidence to prove Larsen’s point.

•   A fun nugget from Patrick Finley (Sun-Times) who tweets that two of the 12 inductees into Ford’s Hall of Fans are Bears fans. Not that we were looking for a reminder, but Chicago really does have some of the best fans in sports. I mean, you really have to be a die-hard to stick with this franchise through thick and thin.

•   Even though he is no longer with the Bears, it’s nice to see Sean Desai get some love on a national stage:

From Super Bowl Live: The #Seahawks made a key addition to their defense, hiring Sean Desai. pic.twitter.com/GyA9RDJYp1

•   Desai getting the Assistant Head Coach title could be just as valuable long term as getting a DC gig. If Pete Carroll gives Desai some Desai opportunities and the Seahawks do well, we could hear his name mentioned as a possible head coach candidate as early as next year’s hiring cycle. Wouldn’t that be neat?

•   I don’t know if this is sad, hilarious, hilariously sad, or something else. But at the end of the day, it’s something:

Today: Cardinals wipe their Instagram… only leave 2 pictures up (both of Kyler). pic.twitter.com/QbZtuE2KIF

•   The upcoming hockey trade deadline is starting to feel like one of those potential franchise turning points:

•   The Bulls put up a whole bunch of buckets in last night’s win against the Timberwolves in a battle of teams who were quiet at the NBA Trade Deadline. But fear not, buyout options could be on the horizon:

After a Quiet Trade Deadline, Here Are Some Buyout Candidates the Bulls Might Want to Considerhttps://t.co/uvD05hDKKO pic.twitter.com/Er3hhhzDU1

•   Everything you need to know about tomorrow’s all-important football game:

Super Bowl LVI: Preview, Predictions, and Everything You Need to Knowhttps://t.co/KA8o7PVxXC pic.twitter.com/l4FOlBZ0Jy

•   You’ve got just one day left to take advantage of the various Super Bowl betting promos. That link there is a good place to peruse the various options for those of you in states where it’s legal, but it currently looks like the best one is the Casesars deposit and free bet bonus. Up to $1500 in deposit bonus and up to $616 in free bets.