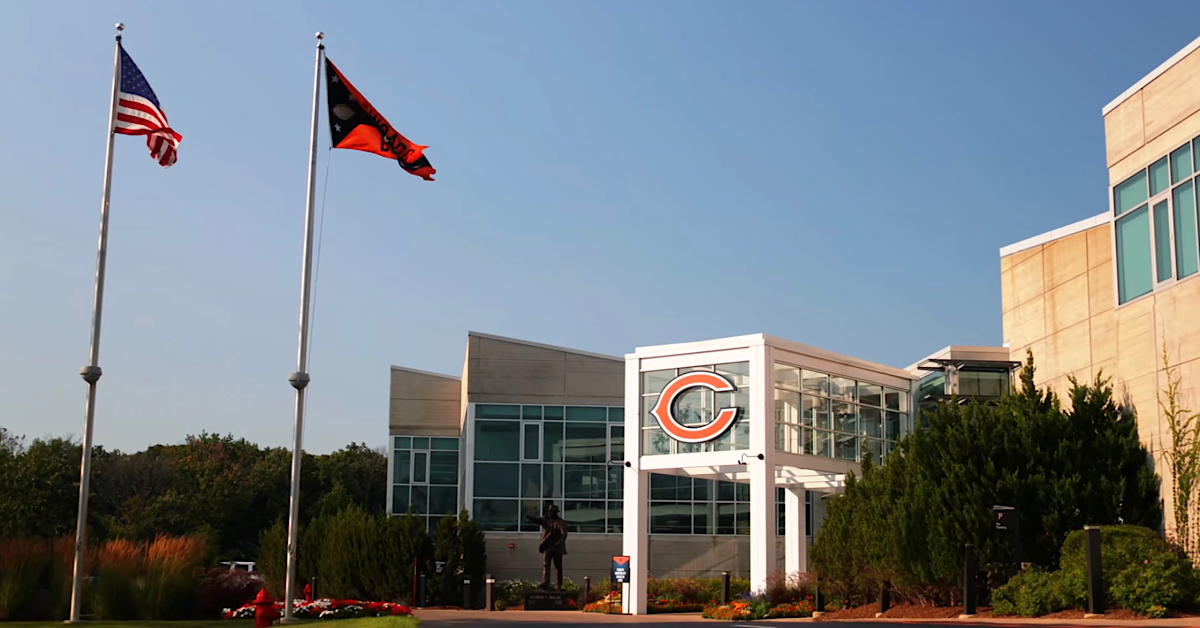 We’re about five months away from our next Monday Night Football game of consequence. And with a brand-new booth, to boot. Just in case you were curious.

•   How about some positive vibes from defensive tackle Justin Jones, one of the newest Bears defenders, to start our Monday?

•   Facility talk probably isn’t at the top of fan to-do lists, but we probably should be more cognizant of its importance to the people it matters to most — the players. Especially right now, when the Bears need all the help they can get recruiting with a new regime, something such as having a top-tier facility that players want to train at can be quite valuable. At minimum, it sure beats the alternative of what Halas Hall once was — an outdated facility whose modernization was long overdue and definitely not something players were tweeting about. We know former GM Ryan Pace had his flaws, but his spearheading the Halas Hall upgrades deserves a pat on the back.

•   Another new member of the defense will soon get to join Jones and the gang in working out at Halas Hall. Cornerback Tavon Young’s deal is now officially official, making him Chicago’s newest defender. Young immediately slides into the slot corner role, although it is worth pointing out he has pitched in at a number of different spots. That the Bears have reeled in a pair of free agent defenders (Young, Dane Cruikshank) who are multi-positional ballers to go along with Eddie Jackson and DeAndre Houston-Carson (both of whom also can fill in at various spots) hints at this coaching staff and front office having a particular type when it comes to building a secondary. Considering the evolution of offenses (especially in the passing game) that we’ve been seeing, the versatility figures to come in handy.

•   Mark Potash (Sun-Times) writes the Bears are “in the clearest, unobstructed rebuild mode” since the end of the Lovie Smith era. And I think that is important to keep in mind when it comes to getting a feel for this team moving forward. Realizing who they are, where they are now, and what they need to get hewer they want to be at the end of this thing will help when it comes to setting expectations later this summer.

•   I’ll say this for Ryan Poles, he hinted at being active in later waves of free agency. And it certainly seems to have come to fruition. Young, Cruikshank, Ryan Griffin, and Matt Adams seem to fit that mold of players who came through on one-year contracts and play with chips on their shoulders with eyes on re-entering the market next year in search of bigger, multi-year deals elsewhere. And if that is how the cookie crumbles, then we could see the Bears benefit down the line with the compensatory draft formula.

•   It’ll take a minor miracle for the Bears to land a compensatory selection in 2023. However, if the Bears can draft well this year, and not need to go hog wild in free agency because they need to fill 30+ spots, then losing free agents next year could line things up for the team to get a draft pick in 2024. As Tom Petty once eloquently sang, the waiting is the hardest part. But the payoff could be worth the wait.

•   Brendan Sugrue (Bears Wire) grades out the Bears’ 2019 NFL Draft class. And while David Montgomery is the star of this class. That Terry McLaurin went just a few picks later serves as a reminder of how depth at a certain position could make for better value than drafting a perceived position of need.

•   This is my kind of content, especially since today is National Pet Day:

When you think of Dwayne Haskins, think about his smile. Think of the positive impact he wanted to have on the people around him.

Our tribute from SportsCenter this weekend pic.twitter.com/h6Jf7SWev5

•   The Chicago Bulls are back in the playoffs. Next up —  That Basketball Team in Wisconsin:

It’s Official: The Chicago Bulls Will Draw the Milwaukee Bucks in the First Round of the Playoffshttps://t.co/zwMmf8G3Ml pic.twitter.com/qanVWBX75l

•   Marcus Stroman has been one of my favorite players since he was a Blue Jays prospect. So seeing his first start as a Cub was meant to be: