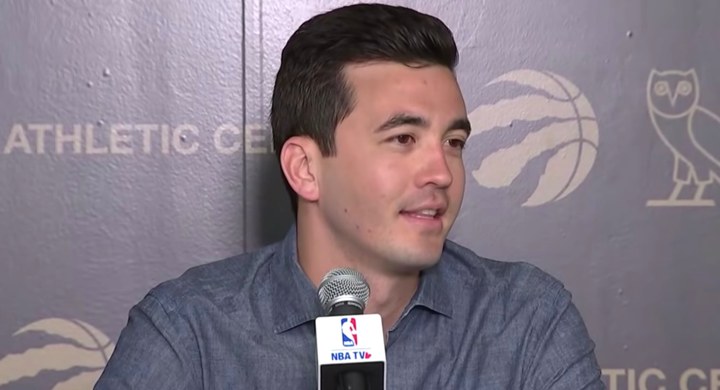 Only three days ago, the Bulls had a promising list of four candidates for their new front-office opening.

Now, only one name remains from that group of four. Well, probably.

After Pacers General Manager Chad Buchanan declined the Bulls request for an interview on Saturday night, the Toronto Raptors and Miami Heat will reportedly block the Chicago Bulls from interviewing one of their top executives.

Sportsnet first reported that the Raptors are unlikely to give the Bulls permission to speak with GM Bobby Webster, an up-and-coming NBA mind who works closely with Masai Ujiri.

The sense is, in this case, the Bulls won’t be granted permission to speak with Raptors GM Bobby Webster, @michaelgrange reports.https://t.co/kaGJwP1XVw

Here’s what reporter Michael Grange had to say:

“It’s customary that teams don’t stand in the way of their people being recruited for promotions in the NBA. Bumping up Webster meant that only teams looking for a president or director of basketball operations role could realistically come looking.

But that’s what the Bulls are on the hunt for, and — recent struggles aside — the franchise that Michael built is still one of the premier destinations in the NBA ….

The sense is in this case the Bulls won’t be granted permission to speak with Webster, who is under contract until the end of the 2021 season ….  The belief is the Bulls — if they haven’t been already — will be told “this is not a good time” when they come calling for Webster.”

Well, that seems like kind of a jerk move …

And to add insult to injury, NBC Sports Chicago’s K.C. Johnson reported soon after that the general feeling around the league is that the Miami Heat will also block the Bulls from interviewing Assistant General Manager Adam Simon:

There’s plenty of current league speculation that the Heat will move to keep Adam Simon.

To be clear, this isn’t a point your finger and laugh moment at the Chicago Bulls. As far as we know, these two candidates aren’t turning down the Bulls, but instead, their respective franchises aren’t allowing them to move on. Both are, obviously, under contract, and while it might be the norm to allow someone to interview for a better job elsewhere, that’s just an understanding … not a written rule.

All of this comes as even less of a surprise after listening to what Johnson had to say on 670 the Score’s Mully & Haugh Show earlier this morning. He made sure to clarify that the Bulls list of names is far larger than the four we’ve already heard about. And that seems to be, in part, because of a situation exactly like this.

“The list is bigger than that … this list is evolving,” Johnson said. “I wouldn’t be surprised if some of these three you just mentioned … they also didn’t get to interview them. I mean, these guys, people can say they’re No. 2’s, but they’re really under a No. 1, they basically do the same job they’d be doing in Chicago for better teams. These guys are really respected by their organizations … I wouldn’t be surprised if some of these teams like Miami or Toronto don’t even give permission to the Bulls to interview them.”

And what do you know, we’re now hearing exactly that.

I guess the good news is, the Bulls have the right idea. An organization wouldn’t (reportedly) plan to not allow their executives to interview for a big-time job if they weren’t the cream of the crop. While this sucks for the Bulls, it’s not like they’re reaching for the low man on the totem pole to save money or whatever (at least not yet).

After all, Johnson also said on the Mully & Haugh Show that Michael Reinsdorfs list is certainly respected around the league:

One person I talked to from another team that’s not on the list and is actually a No. 1 with another team was saying ‘that’s a great list, they’ve talked the right people, it’s just whether or not they get to interview these guys because they’re pretty well respected from their franchises.’

I’m glad the Bulls are on the right track and have the right names in mind, but none of that is going to matter if they can’t get these people to sit down for an interview (for whatever reason). The frustration continues. More soon. Well, info. Not frustration. Probably.