Sitting Out Without Playoffs, Jordan v. LeBron Odds, Best Play of the Season, and Other Bulls Bullets Skip to content 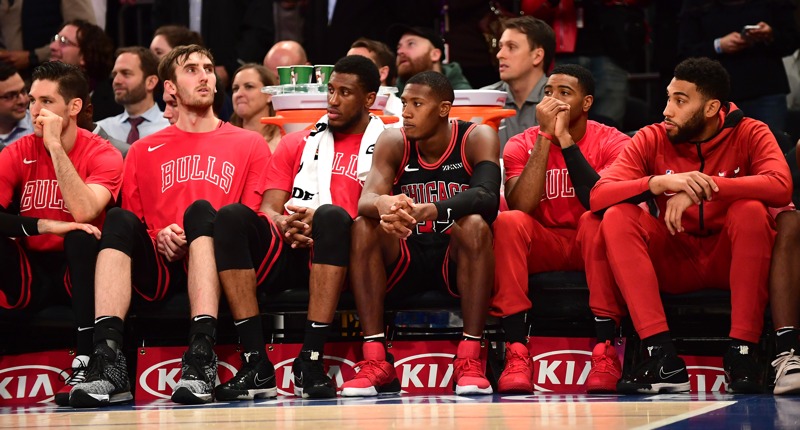 I’m worried I already have the back of an old man, so I got a new desk accessory that forces me to sit up straight. So far, it’s a game-changer. I’m about to be so freakin’ nimble.

•   I think we all understood this would be the case, right?

If Portland Trail Blazers are to resume season with no pathway to playoffs, Damian Lillard tells @YahooSports he won’t play in games: “I’m going to be sitting right on that bench.” https://t.co/SmSTgujb1p pic.twitter.com/hYVmqhGU7A

•   To be clear, Damian Lillard isn’t saying he wouldn’t suit up under any circumstance. If the NBA did have plans to play out the remainder of the regular season or hold a play-in tournament, Dame Time would be all the time. Rather, Lillard is speaking to the possibility of the NBA having all teams play a limited regular season of sorts, which would likely remove any real chance for the 29-37 Trail Blazers to make the postseason (currently 3.5 games back of 8th place). Fortunately, I don’t think Lillard will have to worry too much. While everything is on the table for the NBA, it certainly feels like the league is either leaning toward (1) ensuring these “bubble teams” get their fair shot at the playoffs or (2) moving forward with only the 16 currently slated playoff teams. The monetary incentive for many organizations to reach around 70 regular-season games (when most RSN deals are paid in full) has been well-documented, but I think the NBA is smart enough to know if they force players to play five more games just to reach a benchmark, the out-of-playoff superstars aren’t going to risk anything. In fact, I wouldn’t be surprised if we didn’t see a lot of the in-playoff superstars either. Sure, guys might take the court in limited minutes for conditioning purposes, but why risk injury in what would basically be exhibition games?

•    All of this makes me think more about how silly it would be to have the Chicago Bulls return this season. Arturas Karnisovas and Marc Eversley may want to get a closer look at their new team, but it’s probably best to do that behind closed doors at this point. Unless the NBA picks some wacky alternative method where the Bulls get a real shot at making the playoffs, a return feels weird. Whether it’s five regular-season games or the full 17 still left on Chicago’s original calendar, this team wasn’t going to make the playoffs. Also, (and this goes for any team in the Bulls situation) can you imagine if someone suffered a serious injury during any of these meaningless games? I’d be enraged. If it’s safer to have fewer teams, let the Bulls be a casualty, and let’s call a quits.

Would you rather the Bulls are:

•   As discussed above, if there was a wacky alternative method for the Bulls to compete in a playoff game, I might reconsider things. However, even if that were the case, I think we all know this team isn’t going anywhere. Plus, it most likely means Jim Boylen is back on the court coaching for a brief period of time, and that’d be an odd environment for everyone knowing (hopefully) he’s out the door come real season’s end. And let’s say the Bulls somehow do get to compete in a revised playoffs/tournament, it’s hard to make the normal “any playoff experience is valuable experience” argument. We aren’t going to see anywhere near a normal playoff environment, and it’s hard to say the level of play will be immediately close to what we’re used to.

•   ESPN’s Adrian Wojnarowski gave a great update this morning on the current state of the league’s discussions. We’ll be talking more about it soon, but feel free to get a  head start:

How many teams are getting into the NBA bubble? Who wants to play? The debate continues. New from @wojespn. https://t.co/w8bLrhvnie

Odds to win a one-on-one game between Michael Jordan and LeBron James (BetOnline):

•   Like, are we talking about a 57-year-old Michael Jordan vs. a current LeBron James? Even then, screw it, I’ll ride and die as a Jordan stan. As for in their prime, we all know Jordan would be the obvious favorite AND the obvious winner. Let’s please not forget how good Jordan could be on the defensive end.

•   ESPN picked the single best play from every NBA team this season, and the Bulls selection is obvious: Zach LaVine’s historically bonkers game-winning three against the Charlotte Hornets.

It started with a 5 a.m. workout and usually ended with a W.

An inside look at MJ's full game-day routine during the '97-98 season: https://t.co/7HSdJw0tMc pic.twitter.com/y0MyJ1XqSw

The Detroit Pistons are opening a search to hire a general manager to work with senior advisor Ed Stefanski, sources tell ESPN. Stefanski and Palace Sports Vice Chairman Arn Tellem will be leading the process, which will be underway soon. Story: https://t.co/xO2CDorIXg