We Need Another Ring in Chicago, Giannis Gets Nuggets, LaVine is All Good(!), and Other Bulls Bullets Skip to content 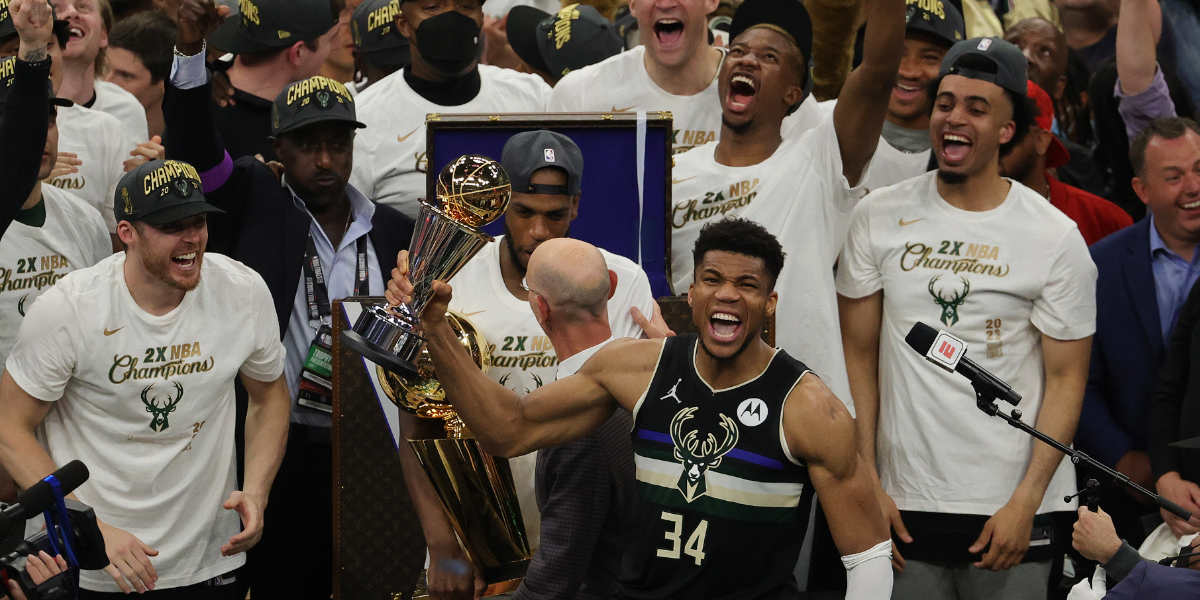 For those who do not know, I am currently stationed in Milwaukee. TRAITOR!!! *GRABS PITCHFORKS AND LIGHTS TORCHES*

I know, I know, it’s not the best look, but you do crazy things for love. The girlfriend landed a great new job about a year ago in the city, so we made the move. I’ve been happily wearing my Chicago gear a little extra ever since.

So, to say I’ve had a first-hand look at how this city has responded to seeing their team in the NBA Finals would be an understatement. While this might be considered a small market, the folks in these parts sure didn’t show it, particularly last night.

The girlfriend and I walked over to the deer district to take in Game 6. Fortunately, we were not in that shoulder-to-shoulder sea of drunken fish that you saw repeatedly come across your television screen. That’s just not my speed. Instead, we found a more open area to the side of the arena where they had another TV setup. Still, even though I had zero skin in the game, the vibes were immaculate.

It was also a reminder of how much a team and its success can ignite a city. All I could think about while walking back to my apartment as horns honked and people (literally) screamed from rooftops was how electric it will be when Chicago, once again, reaches the mountain top. That isn’t to take anything away from Milwaukee. As I said, the atmosphere was great. But I have no question it will be that much more intense when a post-Jordan team finally hoists the Larry O’Brien Trophy. After all, Chicago’s just built differently. I’ve been there for the Cubs parades. I’ve been there for the Blackhawks parades. Unfortunately, I was too young for the Bulls parades, but last night left me starving for one. Hopefully, Arturas Karnisovas and Marc Eversley can feed me.

•   Take it from me, that’s pretty good company.

The only players with all three: Giannis and MJ. pic.twitter.com/23rSy65wcX

•   What Giannis Antetokounmpo did in that series clincher is one of the best individual Finals performances the NBA has ever seen. To drop 50 points, 14 rebounds, and 5 blocks and bring a home crowd their first championship in 50 years is truly legendary stuff. Only seven players ever have dropped at least 50 points in an NBA Finals game: Elgin Baylor, Rick Barry, Jerry West, Bob Pettit, Michael Jordan, LeBron James, and now Antetokounmpo. Out of that group, Pettit and Antetokunmpo are the only ones to ever do it in a series clincher. So, yeah, I think it is safe to say we witnessed a truly historic basketball moment last night.

•   In another historic moment, I believe this is the first time the Larry O’Brien Trophy has made its way to Chick-Fil-A.

•   The next time LaVine drops a 50-burger, he better head straight to Portillos and order 50 Italian Beefs. He also must eat them all.

•   Was anyone else flabbergasted by the fact Antetokounmpo nailed 17-19 free-throw attempts!? In the 20 games leading up to last night, Antetokounmpo averaged just a 55.6 percent clip from the charity stripe. Yuck.

•   Bobby Portis is an NBA champion. While I certainly did not see this one coming, especially in Milwaukee, I got to give the former Bull credit. Portis came through HUGE last night with 16 points off the bench and some much-needed defensive stops. The guy now seems to be living his best life.

Would the Chicago Bulls Ever Reunite with Bobby Portis?https://t.co/bKndbiyoqn pic.twitter.com/jYHdlmNruY

•   Mike Budenholzer really has to learn how not to have a Jim Boylen face on at all times.

•   Ok, anyway, my Bucks praise has officially run out. I gave credit where credit is due, and I recognized basketball history. Speaking of which, if you have problems with that … I’m not sorry. I’m a guy who loves the Bulls, but I’m also a guy who also loves the game. It’s okay to step aside and appreciate something like this. It’s also not like this was LeBron James winning another championship! #NotTheGOAT. With that said, I’m now in full Bulls offseason mode. The draft is on July 29th and free agency will open on August 2nd. Now that the season is over, every front office in the league can begin to truly put their plan into place, and I could not be more excited to see what that will look like for the Bulls.

•   Meanwhile, we also get to keep our eye on Zach LaVine, who WILL rejoin Team USA in Tokyo later this week after a short stint in health and safety protocols!

USA Basketball coach Gregg Popovich said Zach LaVine is on track to practice Friday in Tokyo. If he has no issues, the expectation is he’ll play in Sunday’s opener vs. France.

Regarding Zach LaVine, Kevin Durant said Team USA was “on edge about his next test,” which suggests LaVine’s delay could’ve been tied to a false positive or inconclusive result as much as contact tracing. Either way, LaVine is Tokyo-bound. And Durant acknowledged the good news.