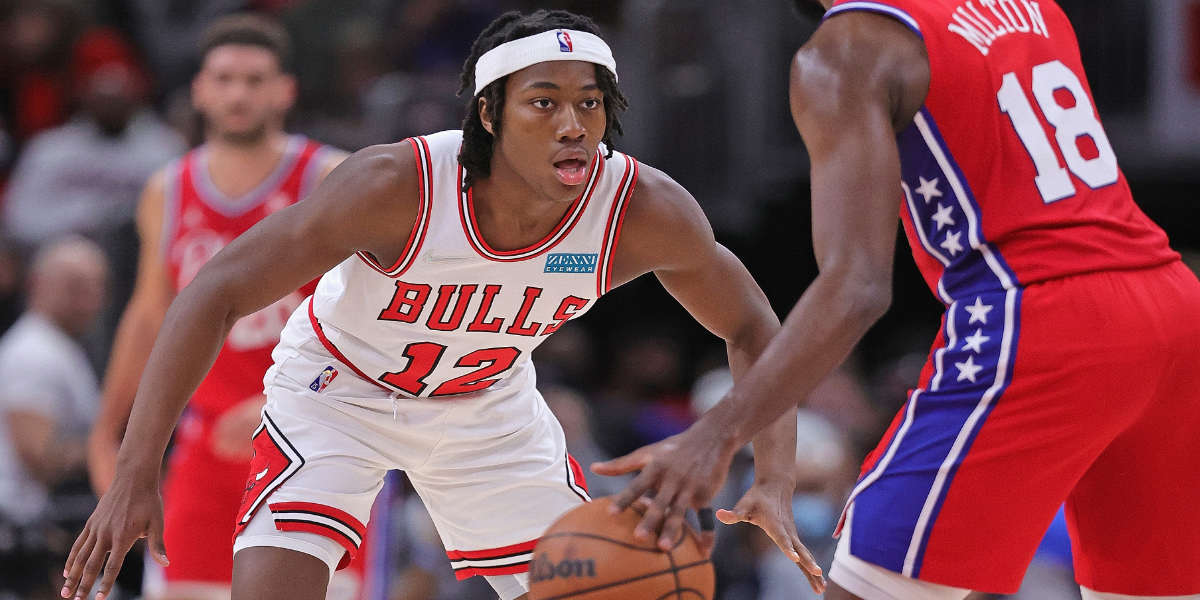 The Chicago Bulls technically didn’t have a first-round pick in the 2021 NBA Draft, but they might as well have ended up with one.

Ayo Dosunmu was projected by many to go within the first 30 picks on July 29th. However, as players flew off the board, Dosunmu’s name remained. Considering he was fresh off three successful college seasons, the latest of which earned him a No. 1 seed in the NCAA Tournament as well as the Bob Cousy Award for being the nation’s top point guard, the lack of interest was surprising. Sure, Dosunmu may not have been the highest-upside young prospect, but he felt like the kind of well-rounded player who could eventually help a contending team with his two-way talent. And, thus far, that’s precisely what he has been for a Bulls team that scooped him up with the No. 38 pick.

Dosunmu has appeared in 16 of the Bulls’ 17 games thus far, taking just the first five games of the season to solidify a spot in the rotation. His 5.8 points and 2.4 rebounds per game will not jump off the page, nor will his 42.5 percent field goal percentage, but the rookie has looked like he belongs as a nightly contributor from the moment he stepped on the floor.

No matter what the team has asked for Dosunmu to do, he can do it. We’ve seen him play great defense against established vets while also looking like a vet himself with big-time shots down the stretch. He has looked like the kind of player any winning team would take off the bench, and the fact the Bulls got him with the eighth pick of the second round feels like another significant win for this front office.

While Dosunmu isn’t on his way to winning Rookie of the Year, this impressive start has not gone unnoticed. The Athletic’s Sam Vecenie released his first Rookie Rankings, and the No. 38 pick found himself No. 13 on the list.

“You feel his presence in the game when he’s there, and he feels confident that what he’s doing out there is the right thing,” Vecenie wrote. “Mix that with the ability to impact the game defensively, and he’ll stick in the Bulls rotation for as long as the jumper keeps falling off the catch.”

Head coach Billy Donovan has said much of the same about Dosunmu, praising him for his fearlessness and “it” factor. He also made Dosunmu’s value to this team very clear once Coby White got the green light to return. Many expected Dosunmu’s minute to decrease with the addition of White’s sparkplug scoring, and while that’s still a possibility, Dosunmu has continued to average just over 20 minutes per game.

Also, Vecenie is right to mention Dosunmu’s catch-and-shoot ability. One of the biggest question marks about the former Illini’s game was whether or not he could become a reliable 3-point threat. While he shot nearly 39.0 percent in his final season in Champaign, it came on just 2.9 attempts per game, leaving the door open for skepticism. However, Dosunmu has looked just as efficient behind the arc in his limited volume thus far, shooting 40.6 percent from long-range so far this season. The opportunities may not be plentiful, but he is sinking the shots when they arrive, and it has only added to his immediate value for this Bulls team.

The question now is just how much better can Dosunmu get? And how fast? No one needs to know the answer right now, especially with how well this Bulls team is already playing. Still, it certainly feels like Dosunmu’s ceiling has already been raised significantly since draft night, and that’s all kinds of exciting.

The NBA’s rookie class has been really strong at the top. In general, it’s been a fun class. I dove deep into the best 16 guys, ranking which rookies have been most effective thus far through the first fifth of the season. https://t.co/1iVTKUeXNs pic.twitter.com/W6bKd4LNTp

And while you’re at it, check out some other words on Ayo …