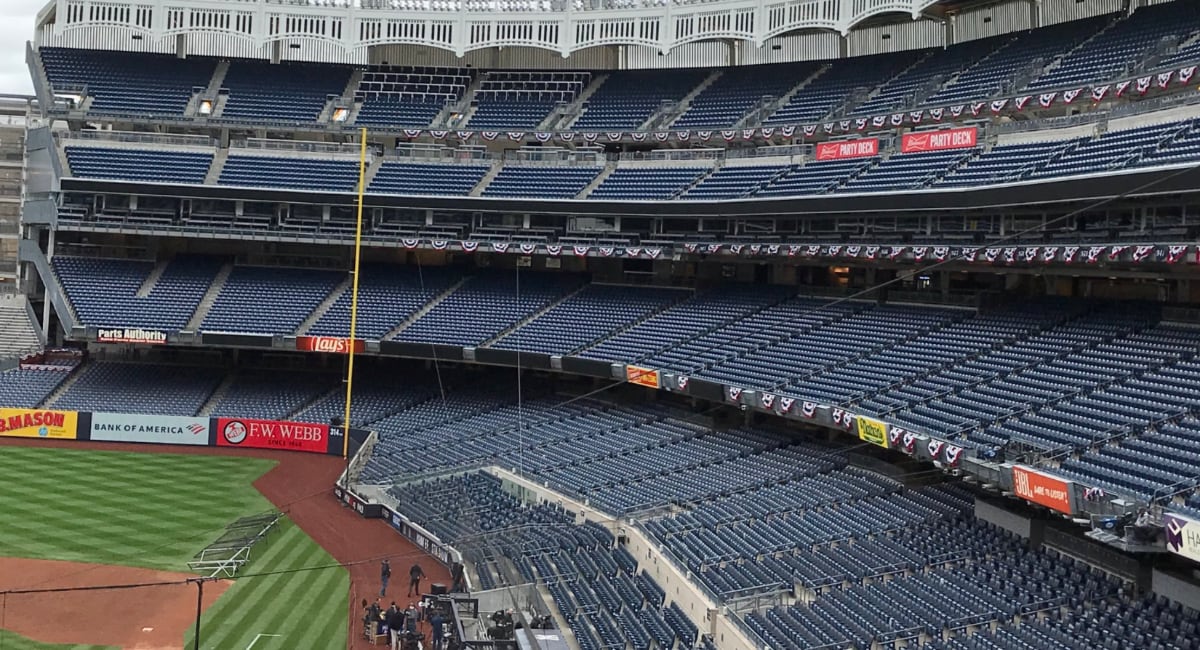 I wonder if I’ll catch a single baseball game live in person this year. And if I don’t, it might be my first summer without doing so since … maybe 2006? I can’t quite recall.

For what it’s worth, it sounds like we will be able to catch a game from the rooftops (if you can afford it), and limited in-stadium tickets could eventually be attainable, but I’m just not sure if it’s actually going to happen. That may ultimately be up to Mayor Lori Lightfoot, who’s been (justifiably) reluctant to commit just yet.

Chicago/the Cubs/the White Sox aren’t the only teams preparing for the possibility with their local government:

Hal Steinbrenner told YES today that he expects to have fans in the park at some point this season. Said there have been many convos with Gov. Cuomo. Expects it would be 20-30% capacity initially if fans are allowed into Yankee Stadium this year.

When was the last time you went a full season without at least one game at Wrigley Field?

Yesterday, Commissioner Rob Manfred got into a bit of PR trouble when he said “We weren’t going to play more than 60 games no matter how the negotiations with players went.”

If you don’t understand why that’s a problem, consider that the union is about to file a grievance that Manfred and MLB owners did not negotiate in good faith during the hiatus. And considering that Manfred (MLB) offered several purportedly legitimate proposals of more than 60 games this was going to be a big issue for him and the case his side will attempt to make.

Naturally, today, he is attempting to clarify those remarks.

“…My point was that no matter what happened with the union, the way things unfolded with the second spike. We would have ended up with only time for 60 games, anyway. As time went on, it became clearer and clearer that the course of the virus was going to dictate how many games we could play.”

Even if Manfred didn’t mean to say what he said the way he said it, that doesn’t really detract from the seemingly purposeful delays throughout negotiations, perhaps with the express intent to shorten the calendar just enough to have time only for the number of games for which the owners were willing to pay … 60.

Clarification or not, his comments yesterday did not help the owners.

Padres Executive Chairman Ron Fowler is aware of the how tenuous this entire season is and of the fact that teams may lose money even if they do manage to get through all 60 games. But he’s also got the right mentality, one I wish more owners would share: “I’m focused on, if we’re going to lose money, let’s win something and be able to celebrate,” he said.

It’s almost like baseball, at its heart, is supposed to be about competing and winning, not maximizing the short-term financial gains. I’m not naive, I understand this is a business and an industry, but I’d also argue that focusing on competing and winning does improve the eventual financial projections. It’s not that crazy. And it’s not the only consideration.

“People don’t want to believe we’re going to lose, cash on cash, well over $100 million,” Fowler said. “I can assure you we are. I just want baseball. … We’ve already borrowed $100 million. We are looking to increase our loan availability, and we are looking to make a significant capital contribution — more money into the team.”

These are good comments. Honest. Blunt. And still in service of the game he’s in charge of stewarding.

According to Cardinals manager Mike Shildt, Jordan Hicks (Tommy John surgery) will not be ready for the start of the regular season:

Shildt says Jordan Hicks (elbow surgery) will start the regular season on the IL. "He will not be available" on opening day, #Cardinals manager says, based on the closer's current rehab schedule. They do expect him to contribute soon.

And you have to remember that – for pitchers, especially – missing time this season is going to be extremely difficult to navigate. There are no minor league games to warm up in. There’ll be bullpen sessions, and live ABs, but it won’t quite be the same. For Hicks, for Jose Quintana, for others, this is going to be a challenge.

Among the changes for the 2020 regular season, MLB has created the ability to place players on the Injured List specifically for COVID-19. And in the service of privacy, teams do not have to disclose publicly the reason for those placements. Unfortunately, when there’s not a reason given (like there literally always is), speculation runs rampant. And, indeed, it’s already started.

The Blue Jays have Brandon Drury, Jonathan Davis, Hector Perez, and Elvis Luciano on the injured list, and the Phillies have just placed Hector Neris, Tommy Hunter, Ranger Suarez, and Scott Kingery there – none of them have reasons listed for that status. And as you can imagine, people are wondering.

I don’t actually think there’s much reason to be ashamed of infection, but I understand the need for privacy. I hope teams (or maybe the media?) find a way to handle these cases, which will happen, thoughtfully.

The Twins Are Concerned

Last year, the Twins won 101 games. This offseason, they added Kenta Maeda, Josh Donaldson (Oh my God … do you remember that drama?) and Rich Hill. And right now, they’re very concerned about playing the season.

“You see the things that are popping up right now around the league,” catcher Mitch Garver said. “Teams are starting to show guys that are testing positive. I think you’re going to see more when the reports start coming in for every team. The main concern is how do you keep most of your team healthy and still focus on baseball? How do you take away the effects of the virus and focus on the actual game? Because a lot of the country has always been worried about the virus and the symptoms you may have and the potential long-lasting effects, but it seems like baseball is just concerned about getting on the field.”

That’s just one comment among many from Twins players and coaches that you should take time out of your day to read. I’m sure I’m too cavalier about how badly certain players want to play and I have to do better to remember that while people have the right to opt-out, the pressure not to must be overwhelming. Sometimes, words actually do speak louder than actions.

The Value of Depth Starters

Boy … I can’t say I’m thrilled to read a headline that reads “Will the Compressed Schedule Make Depth Starters More Valuable?” on the day the Cubs lost a starting pitcher.

But here we are:

What effect will a compressed schedule short on off-days have on a team's pitching staff? Will it put those teams with lots of rotation depth in a better spot than those without? @_Ben_Clemens on the impact of a shorter season on rotations. https://t.co/Dq6sP3EE4R

The good(?) news is that having great starting pitching depth won’t necessarily be any more or less important in a condensed season.

Yesterday, Ian Happ and Anthony Rizzo took some batting practice at Wrigley Field, and others are joining them around the country:

#OTD in 1963 Juan Marichal and Warren Spahn competed in an epic fifteen-inning scoreless duel. The game ended in the 16th on a HR by Willie Mays. pic.twitter.com/GUhj2COOx0

You Thought Anything Could Happen in MLB Before?

Obviously, anything can happen in baseball – that’s the calling card of the game – but the point of a long 162-game season is eliminate as much of the noise as possible. Obviously, that’s not feasible this year, and with 60 games on tap, a LOT has changed in the books:

In a shortened season, anything can happen. pic.twitter.com/JVbtpr9JoE

Obviously, the Pirates have one of the most notable leaps, going from effectively NO chance at the postseason to almost 1 in 6, but there’s plenty of interesting changes across MLB.

Of course, if you recall, the Cubs are actually one of the biggest losers of the shortened schedule (-5.9% playoff odds), with each of the other teams in the NL Central getting a bump according to ZiPS at the expense of the Cubs.

I’m going to give you some bad news – the Mexican Baseball League will not happen this year – and distract you from it with some good news: They’re still going to support the players financially, while taking the off-time to change some rules, improve their infrastructure and broadcast efforts, and modernize their entire league.

Also, there’s was a super-secret baseball club during quarantine, filled with stars like Justin Verlander, Giancarlo Stanton, and Max Scherzer: