The Early Injuries in Spring Training Could Be Significant, DH Jokes, Dubious Math, and Other Cubs Bullets Skip to content 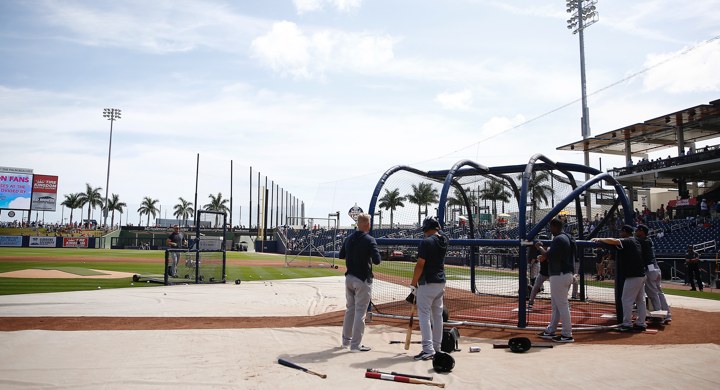 Appreciate you indulging the reminders: the Super Bowl is Sunday, which means some of the best sports betting promos of the year are dropping this weekend. So, if you’re into it and want free bets/matching deposits/huge odds boosts/etc., check out the full slate of promos here.

•   With the lockout lasting as long as it has, and with contact cut off between teams and players, we’ve talked about the challenges that creates for conditioning and rehab. But something I hadn’t quite thought about is something that happens every Spring Training and could be even worse this year: the immediate surprise injury. Humans are not binary sets of 1s and 0s, and so “injuries” are sometimes just things that feel a little off when you’re throwing the ball in January. It isn’t until you actually start to ramp up in Spring Training that the issue becomes more clear or more severe. No one expected it, no one predicted it, and boom, a guy is lost for the season right when Spring Training starts. It already happens every normal year.

•   With guys working on their own all offseason, and without any communication with the teams, you just wonder if there’s going to be even more situations where guys got “off” at some point, and then they show up and it goes sideways. Or maybe some guys know they got kinda injured – something that in years past would’ve been raised and addressed in the offseason – but it won’t even come up until they first show up for Spring Training. It could be a ton of injuries showing up in the first week of Spring Training this year (to say nothing of the injuries that come later because of an abbreviated spring).

•   And there’s more to consider on this front, from Ken Rosenthal and Jayson Stark:

So how many players have had to seek out treatments and rehab programs on their own? How many players will feel the effects of what one club official described as “inconsistent, unmonitored” offseason conditioning routines?

“The first thing (I worry about),” said another club official, “are unknown injuries walking into camp because we haven’t been able to talk to players — or potentially worse, players who are concerned about disclosing injuries when they walk into camp, try to play through it and make it worse.”

And what if that guy trying to play hurt is a player who had to sign a minor-league contract and now thinks he has to hit .600 just to make the team? What if he’s a player who is headed for an arbitration hearing where his 2022 health isn’t supposed to be admissible — but he just hobbled into the hearing room on crutches, a sight not even the most impartial arbitrator could pretend not to see?

Or what if we’re talking about a big-name free agent coming off an injury — someone like Clayton Kershaw, for example?

Suppose the Dodgers sign him. Suppose they then lose out on another free-agent starter who didn’t like the odds of beating out Kershaw for a rotation spot. Then suppose, halfway through camp, they realize he isn’t as healthy as they hope. The reverberations of every significant injury, in a spring like this, will be massive.

•   With Rob Manfred’s confirmation that the owner offers have included the universal designated hitter, and with an understanding that obviously the players want it, too, we can safely assume now that it’s definitely coming. I mean, we already assumed it, but now it’s been publicly confirmed. Earlier thoughts here on how the Cubs’ DH situation is perceived, if you missed it.

To the extent that I contributed to the demise of pitchers batting- I offer a heartfelt apology.

•   Marcus Stroman is fine with giving up hitting, but he does have one feather in his cap:

Nope. Lol hit a homer, few doubles, some singles and snagged a stolen base. Beyond happy with my offensive career. Lol I truly believe the game is better with the Universal DH! https://t.co/pThKg9fPaJ

The only opposite field HR hit by a batting pitcher on an 0-2 pitch in the last TEN seasons… 🤯 https://t.co/vtzbMNb76l pic.twitter.com/hn8KmkXcKs

•   He’ll still be available for other duties (I would add back-up shortstop to the list):

I will definitely be available to pinch-hit and pinch-run off the bench though! Lol 🗣

•   A whole lotta folks dug into the math on Rob Manfred’s dubious claim that an investment banker informed the owners that it was more lucrative to invest in the stock market than to buy an MLB team over the years (I just rolled my eyes because it was obviously fudged, but it ticked a lot of other people off). It was just a silly thing to claim, even if there’s a version of reality where you can put numbers together and make it true. External studying suggests, no, no, it’s been quite a bit better to own an MLB team:

Inside The Numbers: Manfred Claims Investing In Stock Market Better Than Return On MLB Club Sales https://t.co/koRF9nwnXq via @ForbesSports

“Twenty years ago MLB franchises were UFOs: unidentified and financially overlooked. Today that UFO has landed in the clubhouse with a true definition: ultimate financial opportunity” — Scott Boras https://t.co/48WjLuDAks

Ultimately a success, I would say. https://t.co/bzMewY4mpc

•   MLB’s executive council – a group of eight owners who are kind of like the primary layer of decision makers for “the owners” – has changed a bit, with D-Backs owner Ken Kendrick and Mariners owner John Stanton joining the group, and White Sox owner Jerry Reinsdorf and Brewers owner Mark Attanasio rolling off (ESPN). The other six owners represented on the council: Red Sox, Dodgers, Tigers, Phillies, Rockies, and Royals.

•   I love this so much, both because I CANNOT WAIT for ‘Better Call Saul’ to return (in April), and because of the hat:

Yesterday an amazing crew of people finished shooting “Better Call Saul” in Albuquerque, NM. It began in 2014, with great writing always leading the charge, and despite challenges of all kinds, our energy and care never flagged. I am honored to have been part of it. pic.twitter.com/6tJICNbleh

"That’s what I want with Lost Boyz — bringing communities together through the love of this game so that we can get to know each other and have these tough conversations."

•   It’s pretty hard to have one worse than Grayson Allen against the Bulls, but this is it:

David Collins Jr. Was Just Ejected for One of the Hardest, Dirtiest Fouls You’ll Ever Seehttps://t.co/BmfecRmheR pic.twitter.com/FC9kW3nqPz

Ugh! Devin Hester Did NOT Make the Pro Football Hall of Fame's Class of 2022 https://t.co/T4M6v4VHVL