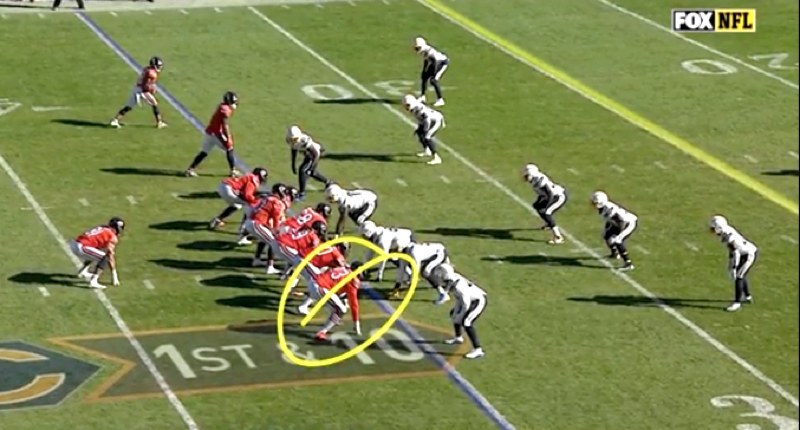 Matt Nagy digging into the Bears’ archives to pull out some plays to run from the I-formation was neat, but it wasn’t close to the most intriguing thing his offense did in Week 8.

Because even though watching Nagy and the Bears go back to the good ol’ days of using a fullback as a lead-blocker, the most innovative thing the team did was successfully use an eligible tackle to further create rushing lanes against the Chargers.

Did everybody catch on to the usage of Cornelius Lucas, who played nine snaps as an eligible lineman? If you did, congrats on having that eagle eye. And bonus points for those of you who realized – like I did (#Genius) – that Nagy was snatching from Sean Payton’s playbook, a week after his Saints used reserve offensive lineman Will Clapp to help spring some runs and protect Teddy Bridgewater at Soldier Field.

But no shame if you didn’t catch when Lucas was in the game – if we’re being fair, watching for extra offensive linemen isn’t sexy. And it’s easy for those guys to get lost in the shuffle when you are trying to keep tabs on everything else that is happening in the game — not to mention the game within the game. But when they make the kind of impact Lucas did, it’s tough to ignore.

Here is a breakdown of how things played out when Lucas reported as eligible:

Well, would you look at that?

Nine plays. Eight called runs. Seven rushes that counted in the play log (because one was knocked off due to a penalty) that went for 40 yards. A 5.7 yards per carry average. One big chunk play on a 31-yard pitch and catch from Mitch Trubisky to Allen Robinson on a play-action pass. And just one play that got wiped out because of a penalty. At minimum, the Bears created a nice package and added a new element to an offense that had yet to carve out an identity. But there is so much more to be gained here if Nagy plays his calls right.

Running out of the “I” and using extra offensive linemen to boost the ground game is one thing. Building from that to expand your playbook is something else … and something Nagy and the Bears’ offensive brain-trust should be working to do ahead of Sunday’s game against the Eagles.

That the Bears didn’t pass out of this formation is telling, and the Eagles probably will use personnel packages to key on what Nagy’s offensive play call will be. That’s when he could implement counter moves from this look, such as straight drop-backs, bootlegs, sprint roll-outs, and an expanded play action package. There were things that worked from this outfit, so an offensive mind such as Nagy should be smart enough to realize it and build onto it moving forward.

Chicago has had offensive line problems protecting on pass plays and clearing space in the running game, so dipping back into this bag of tricks and try to create more from humble beginnings is sensible. Tight ends haven’t done the job and the Bears don’t have a fullback listed on the roster, so this shift in philosophy might have been the smartest thing Nagy has done all year to this point.

On Sunday, we’ll learn if last week was just a troll job that turned out to be productive or the start of an offense finally finding an identity.