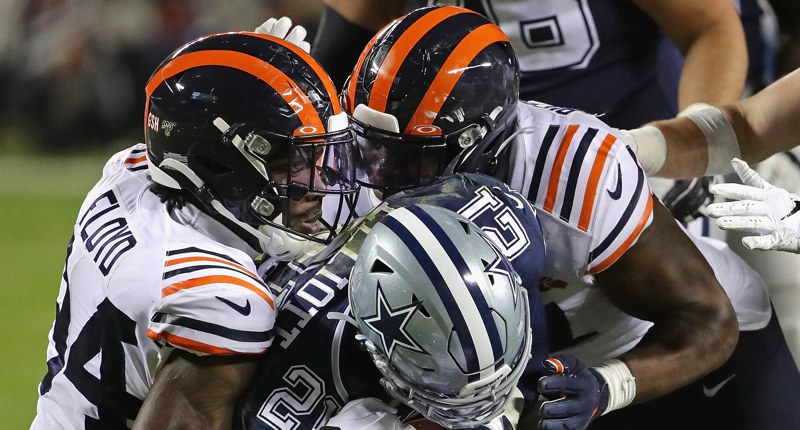 If you were wondering how Mitch Trubisky would fare against a defense that ranked eighth in scoring, total yardage, and passing yardage, or how the Bears would look again a team sitting atop its division, Thursday Night Football had all the answers you were looking for — and a little bit more.

The Bears beat the Cowboys by a 31-24 score, but that doesn’t really tell the story of how the game truly unfolded.

Mitch Trubisky delivered in prime-time. That – essentially – is where the story begins and ends. He re-discovered his legs, then threw darts all over the field to rack up points on the board. Trubisky finished with 244 passing yards and three touchdowns through the air to go along with 63 rushing yards (on 10 carries) and another score. Four trips to pay dirt for Trubisky will go a long way toward making people forget about an opening-drive interception near the goal line. There was even a point in which the Bears scored 24 unanswered points at one juncture of the game is impressive. I mean, this is an offense scored fewer than 24 points in nine of its first 12 games this season. Where have these dudes been all year?

Let’s not overlook what the defense did to secure a win. Put aside some late-game garbage yards and points, and a Bears defense that was without Prince Amukamara looked like it wasn’t going to skip a beat. Cowboys quarterback Dak Prescott was sacked twice and hit seven times by four different Bears defenders. And while the unit didn’t come away with a turnover, they kept a potent offense quiet for the better part of three quarters.

The victory could ultimately be a costly one for the Bears, who saw Roquan Smith, Javon Wims, Roy Robertson-Harris, and David Montgomery leave the game with respective injuries. We will keep our eyes on what their statuses are in the coming days. At minimum, at least the team has 10 days until their next game against the Packers in Week 15. The extra time of for rest and recovery will be welcome with open arms for a team that just wrapped up playing three games in 12 days.

In the end, winning on Thursday keeps the Bears squarely #InTheHunt for a playoff spot. And that is what matters most Sure, it’s a rough road ahead. But beating the Cowboys holds a lot more weight than taking down the lowly Lions or Giants.