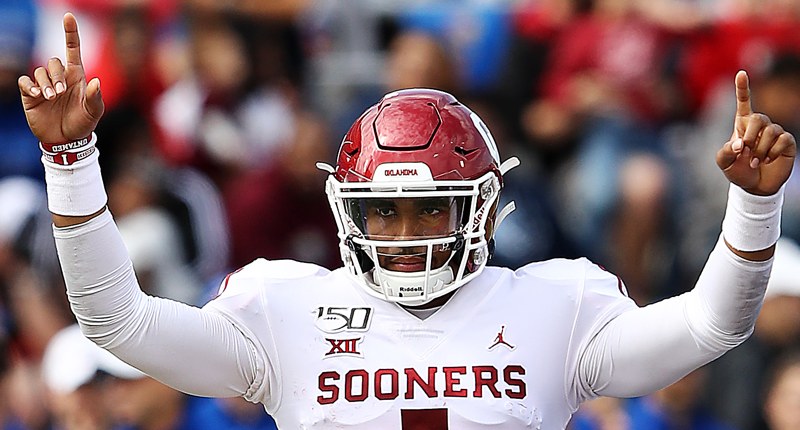 Jalen Hurts has received plenty of praise from high places this winter.

For example, Bengals Head Coach Zac Taylor lauded Hurts for the success he’s had along his unique journey, noting that his college career has (in a way) mimicked what you might see from a pro: “He really is a little bit like an NFL quarterback,” Taylor explained, “in the sense that he had to go quickly and pick up an offense and really prove himself as a leader in a new program in a short period of time.” Don’t sleep on what that experience might mean to a drafting team. Meanwhile, Pro Football Focus recently identified Hurts as one of the most intriguing prospects in the draft.

And why wouldn’t he be?

Success at two major college football powerhouses? Check. Skills as a rusher on designed runs and scrambles? Double check. A knack for playing winning football while showing an ability to pick up offenses? Check-Check-Check. And given the success Lamar Jackson had in Baltimore’s offense, Hurts’ stock could very well be on the rise.

Among the other notable bits about Hurts is that only Joe Burrow – the projected No. 1 pick in the 2020 NFL Draft – had a better overall PFF grade than his 91.6. That’s good data. That’s good company. And if you were to apply the site’s wins above average grade, Hurts’ production was good enough to be worthy of a look as a first-round pick.

But despite some early positivity, a consensus – at this stage of the draft process – has been tough to pin down. And it may have to do with a bit of a slow start at the Senior Bowl.

According to Bryan Perez of NBC Sports Chicago, Hurts was underwhelming in his first Senior Bowl practice, citing his general inconsistency as a thrower and overall lack of accuracy (maybe finding a rhythm with pass-catchers you’ve never played with – on Day 1 – shouldn’t have been expected, but, hey, it was noted). And it’s not like that’s a completely unfounded criticism.

Inconsistency was considered one of his most problematic traits early in his college career, as was anticipatory throwing and a penchant to hold onto the ball for too long, which invites all sorts of trouble. Obviously, if those factors were once a key-concern, evaluators are going to keep an extra eye out for them when they can, fair or not. Which, hey, you’ll find no argument here, as Bears fans well know the pitfalls of watching a quarterback struggle with anticipatory throws.

In any case, how Hurts rebounds from a slow start at practices will be worth watching. He’s still one of the guys to keep an eye on this week – especially as it pertains to QB prospects who could conceivably be on the Bears’ radar.