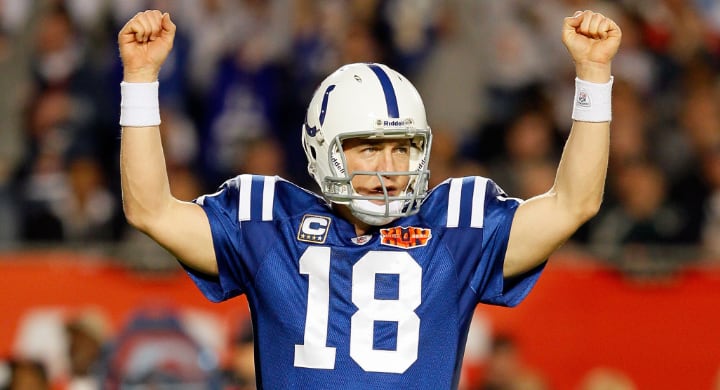 Matt Nagy has gone to great lengths to break through to his quarterbacks room during this offseason’s virtual team meetings.

And among the tricks was inviting a mysterious guest speaker, described as someone with “a background in the offense going back a couple decades” who talked about things such as footwork, adjustments, execution, and progression when breaking down a single play.

We had a couple guesses of who that might’ve been …

Matt Nagy Called Upon a Secret Guest to Help Tutor Mitch Trubisky, Nick Foles, and Tyler Bray … But Who Was It?https://t.co/5po1laR8FN

… but we were wrong.

In Peter King’s latest at Pro Football Talk, the long-time NFL insider reached out to Peyton Manning in an attempt to get a grasp on what this offseason feels like for players — specifically quarterbacks. And in Manning’s explanation, he offered up an anecdote about doing Zoom calls for teams throughout the offseason, the Bears included. As for Manning’s message, I hope it is one Mitchell Trubisky, Nick Foles, and Tyler Bray take to heart.

“‘Hey, organize your own Zoom meetings without the coaches, just get you and the tight ends, you and the receivers,'” Manning explained. “It’s actually an opportunity to ave even better communication. Because there’s nothing else to do, right. … Instead of complaining about it, see it as an opportunity to really improve. There’s no reason you shouldn’t have every play from last year studied down to the T.”

Of course it was Peyton Manning! How did we not see this one coming? Manning started the 2019 season by getting baptized into Bears fandom. Before the 2018 season, Manning spent some time hanging out with Trubisky while the Bears were in Denver having joint practices with the Broncos. And well before that, Archie Manning told reporters about how Trubisky picked Manning’s brain in search of advice when deciding to forgo his college eligibility to enter the NFL Draft, adding: “Peyton thinks a lot of Mitch and I do too.”

Well, then … that’s a darn good get for the Bears to keep that pipeline open.

Indeed, it’s a pretty neat thing the Bears did here to bring in a new voice to tutor quarterbacks. Because while having a head coach (Nagy), offensive coordinator (Bill Lazor), QBs coach (John DeFilippo), and passing game coordinator (Dave Ragone) as long-tenured quarterback builders on staff, there is something valuable about a different voice leading the way and offering up an ex-player’s perspective.

More so now that we know that said player was legendary quarterback Peyton Manning.

And as expected, Manning nails it. These are tough times for teams, and particularly quarterbacks. But rather than get bogged down, getting creative to find a way to have workouts with teammates could go a long way toward giving a team a much-needed edge.

In King’s piece, Manning also talked about how his brother Eli took ownership of team meetings during the NFL lockout of 2011. Peyton explained how Eli gathered his teammates and was able to get his hands on practice scripts, practice jerseys, and more as he essentially became a player-coach leading 7-on-7 drills at a high school. That year, the Giants went on to win the Super Bowl. And while I don’t know if those offseason workouts are what specifically led to New York’s triumph, they certainly didn’t hurt.

And for what it’s worth, Trubisky has already done some offseason organizing with teammates. Here’s hoping that’s a positive first step in the next phase of Trubisky’s developmental story arc.